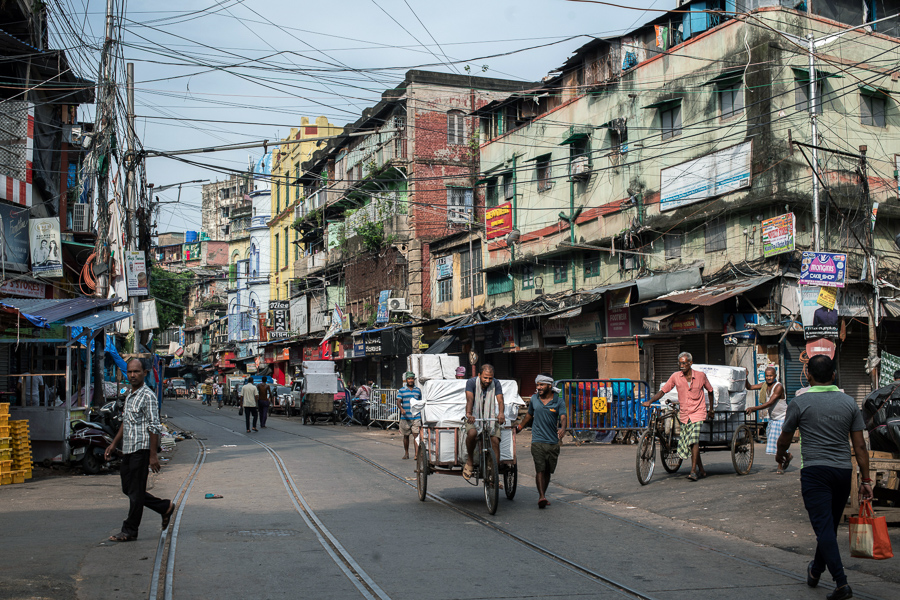 Day laborers in Kolkata, India, on July 19, 2021. Small traders and daily wage laborers in India suffered bigger job losses during the lockdowns than others, though they were able to go back to work once the restrictions were lifted; Image: Rebecca Conway/The New York Times

The coronavirus continues to batter India’s damaged economy, putting growing pressure on Prime Minister Narendra Modi to nurture a nascent recovery and get the country back to work.The coronavirus, which has struck in two waves, has killed hundreds of thousands of people and at times has brought cities to a halt. Infections and deaths have eased, and the country is returning to work. Economists predict that growth could surge in the second half of the year on paper.Still, the damage could take years to undo. Economic output was 9.2% lower for the April-through-June period this year than what it was for the same period in 2019, according to India Ratings, a credit ratings agency.The coronavirus has essentially robbed India of much of the momentum it needed to provide jobs for its young and fast-growing workforce. It has also exacerbated longer-term problems that were already dragging down growth, such as high debt, a lack of competitiveness with other countries and policy missteps.Economists are particularly concerned about the slow rate of vaccinations and the possibility of a third wave of the coronavirus, which could prove to be disastrous for any economic recovery.“Vaccination progress remains slow,” with just 11% of the population fully inoculated so far, Priyanka Kishore, the head of India and Southeast Asia at Oxford Economics, said in a research briefing last week. The firm lowered its growth rate for 2021 to 8.8%, from 9.1%.Even growth of 8.8% would be a strong number in better times. Compared with the prior year, India’s economy grew 20.1% April through June, according to estimates released Tuesday evening by the Ministry of Statistics and Program Implementation.But those comparisons benefit from comparison with India’s dismal performance last year. The economy shrank 7.3% last year, when the government shut down the economy to stop a first wave of the coronavirus. That led to big job losses, now among the biggest hurdles holding back growth, experts say.Real household incomes have fallen further this year, said Mahesh Vyas, chief executive of the Center for Monitoring Indian Economy. “Till this is not repaired,” he said, “the Indian economy can’t bounce back.”At least 3.2 million Indians lost stable, well-paying salaried jobs in July alone, Vyas estimated. Small traders and daily wage laborers suffered bigger job losses during the lockdowns than others, though they were able to go back to work once the restrictions were lifted, Vyas said in a report in August. “Salaried jobs are not similarly elastic,” he said. “It is difficult to retrieve a lost salaried job.”About 10 million people have lost such jobs since the beginning of the pandemic, Vyas said.In August, Modi’s government moved to rekindle the economy by selling stakes worth close to $81 billion in state-owned assets like airports, railway stations and stadiums. But economists largely see the policy as a move to generate cash in the short term. It remains to be seen if it will lead to more investment, they say.“The whole idea is that the government will borrow this money from the domestic market,” said Devendra Kumar Pant, chief economist at India Ratings. “But what happens if this project goes to a domestic player and he is having to borrow in the domestic market? Your credit demand domestically won’t change.”

Pant added that questions remained about how willing private players would be to maintain those assets long term and how the monetization policy would ultimately affect prices for consumers.“In India, things will decay for the worse rather than improve,” he said, adding that the costs to users of highways and other infrastructure could go up.During the second wave in May, Modi resisted calls by many public health researchers, including Dr. Anthony Fauci, director of the U.S. National Institute of Allergy and Infectious Diseases, to reinstitute a nationwide lockdown.The lockdowns in 2021 were nowhere near as severe as the nationwide curbs last year, which pushed millions of people out of cities and into rural areas, often on foot because rail and other transportation had been suspended.Throughout the second wave, core infrastructure projects across the country, which employ millions of domestic migrant workers, were exempted from restrictions. More than 15,000 miles of Indian highway projects, along with rail and city metro improvements, continued.On Tuesday, Pant said that India’s growth estimates of 20.1% for the April through June period were nothing but an “illusion.” Growth contracted so sharply around the same period last year, by a record 24%, that even double-digit gains this year would leave the economy behind where it was two years ago.Economists say that India needs to spend, even splurge, to unlock the full potential of its huge low-skilled workforce. “There is a need for very simple primary health facilities, primary services to deliver nutrition to children,” Vyas said. “All these are highly labor intensive jobs and these are government services largely.”One of the reasons Indian governments typically have not spent in those areas, Vyas said, is that it has been considered “not a sexy thing to do.” Another is the governments’ “dogmatic fixation” with keeping fiscal deficits in control, he said. The government simply can’t rely on private sector alone for creating jobs, Vyas said.The “only solution,” he said, is for the government to spend and spur private investment. “You have a de-motivated private sector because there isn’t enough demand. That’s what’s holding India back.”