Indonesia crash: What to know about the Boeing plane

The plane involved in the Sriwijaya Air crash was a Boeing 737-500, a proven model developed in the 1980s, not the troubled 737 Max airliner, which was grounded after deadly crashes in 2018 and 2019 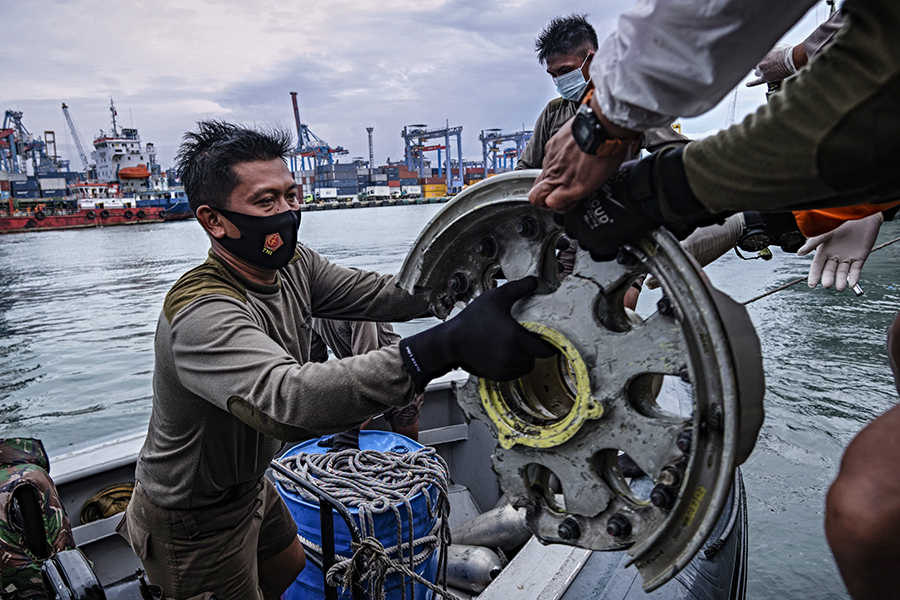 Indonesian Marines offload bits of debris from Sriwijaya Air flight SJ182 from their boat on January 10, 2021 in Jakarta, Indonesia. Sriwijaya Air flight SJ182, carrying 62 people on board a flight from Indonesia's capital to Pontianak, Indonesia, lost contact with air controllers shortly after take-off and is believed to have crashed into the waters off the coast of Jakarta.  Indonesian authorities say they have located the "black box" which could shed light on the cause of the crash and hope to be able to recover it on Monday. (Photo by Ed Wray/Getty Images)

The crash of a plane in Indonesia carrying more than 60 people comes at a difficult time for the aviation giant Boeing, which has seen its reputation battered by years of investigations over deadly crashes. While authorities are still looking for the cause, the plane that crashed Saturday near Jakarta, the Indonesian capital, was a 26-year-old 737-500, a workhorse model with a good safety record. The plane at the center of the Boeing crisis was the 737 Max, a later version with faulty anti-stall software that led to two deadly crashes. Here is what to know about the Boeing plane in the Indonesia crash. What caused the Boeing plane crash in Indonesia? It is unclear what caused the crash. Sriwijaya Air Flight 182, which was traveling to the city of Pontianak on the island of Borneo, took off amid a heavy monsoon season rain, following a bad weather delay. It plunged more than 10,000 feet in less than a minute, according to the tracking site Flightradar24.

Indonesia, an archipelago nation of thousands of islands, is heavily dependent on air travel. Although the country has a long history of aviation accidents, Sriwijaya Air had not had a single fatal crash since it began operations in 2003. The plane involved in the Sriwijaya Air crash, which lost contact shortly after takeoff from Jakarta on Saturday, was a Boeing 737-500, a proven model developed in the 1980s, not the troubled 737 Max airliner, which was grounded after deadly crashes in 2018 and 2019. How is the 737-500 different from the 737 Max? The plane involved in the crash Saturday is an earlier model of the 737, and it had been in operation for 26 years. It was previously flown by Continental Airlines and United Airlines before it was delivered to Sriwijaya Air in 2012, according to the Airfleets online database. The 737-500 does not share the same anti-stall system as the 737 Max, which was triggered in the 2018 crash of another Indonesian flight, Lion Air Flight 610, killing all 189 people aboard. The same system was blamed in the crash of a 737 Max in Ethiopia in March 2019, which killed 157. Those crashes forced the grounding of the Max fleet worldwide and a crisis for Boeing. The company fired its chief executive and said last year that the Max grounding would cost it more than $18 billion, a sharp blow even before the coronavirus pandemic pummeled the industry. Last week, the company said it had agreed to pay $2.5 billion, including $500 million for a victims fund, to resolve a criminal conspiracy charge to defraud the Federal Aviation Administration over evaluation of the 737 Max. The troubled 737 Max resumed flying last month, with American Airlines Flight 718 making the first commercial flight of the plane after the FAA lifted its grounding order in November. Before they are permitted to fly again, each 737 Max aircraft must have its wiring and software modified. What is the history of the Boeing 737-500? The 737-500 was introduced with the purchase of 20 planes in 1987 by Southwest Airlines. The airline used the model, with a capacity of 122, to more efficiently handle longer routes with a smaller number of passengers, Southwest’s corporate historian, Richard West, wrote in 2016. That need dropped as its long-haul travel business increased, and Southwest’s last 737-500 flew in September 2016. Historically, the 737-500 has been a safe plane to fly. The series it belongs to, which includes the 737-300 and 737-400, has had 19 fatal accidents over more than three decades in operation, or about 1 fatal accident for every 4 million departures, according to a 2019 Boeing report. Four previous fatal accidents have been recorded in the 737-500, including crashes in South Korea in 1993, Tunisia in 2002 and in Russia in 2008 and 2013, according to the Aviation Safety Network. Which airlines fly it? Boeing manufactured 389 of the 737-500 before the model was discontinued. As many as 100 remain in use by smaller airlines around the world in countries including Afghanistan, Iran, Nigeria, Russia and Ukraine, according to the tracking website Planespotters.net.

Tweets by @forbesindia
Consulting and Beyond, founder Rathandeep Umesh's stimulating life story
Whatsapp, Telegram, Signal: Which one is more secure?