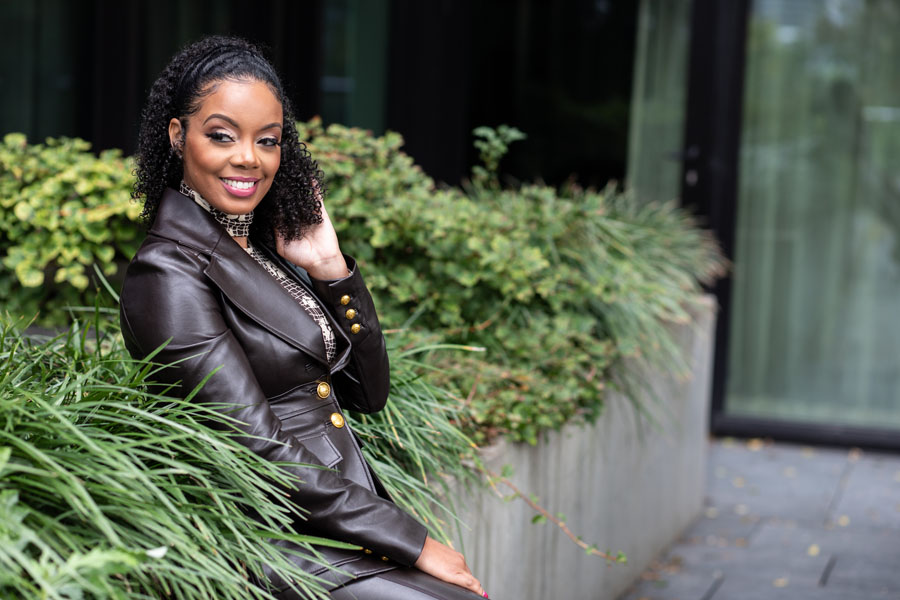 For more than a decade, Whitney White, aka @naptural85, has posted hair tutorials on YouTube for Black women with natural, coily hair like hers. A self-described natural-hair OG, White, 35, mastered the art of the wash and go (the signature, curl-defining look for “naturalistas”), the pineapple (a way to gather hair at the crown to maintain hairstyles for sleeping) and the twist-out (a twisted, dried, then untwisted hairdo). She also taught viewers how to create nourishing shampoos, deep conditioners and hair masks for optimal hair health and growth.

Eventually many of her more than 2 million followers encouraged her to produce her own line of hair products. Now, as the co-founder of Melanin Haircare, she joins the ranks of Black female-owned companies that sell products catering to the needs of Black hair.

The global hair care industry, worth an estimated $77.15 billion, is projected to reach $112.97 billion by 2028, according to Fortune Business Insights. Black-owned hair care companies are growing, increasing their market share to $2.5 billion in 2021, spawning waves of Black female hair care enthusiasts with business acumen.

Recognizing the industry’s considerable size, Monique Rodriguez thought that with her ingenuity she might have success in an industry dominated by people who don't look like her.

“I said, ‘This beauty industry is over a billion dollars,’ ” said Rodriguez, 37, a co-founder and the chief executive of Mielle Organics. “I should be able to get in here and get a small piece of the pie and serve women that look like me.

“I saw there was a lack of relatability and education, and I said, ‘If I can just serve the underserved, then I can win in this category.’ ”

Rodriguez started Mielle Organics in 2014 while working full time as a nurse. She, too, turned her passion for developing homemade hair remedies and discussing them on social media into a business.

“It’s inspiring, especially for women of color, to see another woman of color pursuing her dreams — a woman that didn’t have any type of celebrity status, pretty much came from nothing and had a stable career, like the majority of America,” Rodriguez said.

Like White, Rodriguez knew that connecting with women who were seeking guidance on how to style and maintain their textured hair was important and authentic and, consequently, the key to building a brand.

“Natural hair is not easy,” she said. “Every curl pattern is different. You have low porosity here. You have high porosity there. Which products do you use according to your hair type? There was no one talking about that.

“I felt, ‘I’m on this natural-hair journey, and I want to be educated,’” she said. “I want to know how to use the products, because every product I used caused my hair to be frizzy. But there was no one to help me understand what I was doing wrong.”

Rodriguez, who now maintains healthy, waist-length hair, reckoned that not only could she make great products with high-quality ingredients, but she could also help educate customers on how to use the products to get the best results.

Natural takes a lot of care

Many Black women have coily, Type 4 hair, which refers to a numeric system created to assess the texture of hair. Because of these compact ringlets, scalp-producing sebum, intended to lubricate hair strands, has a difficult time moving down the shaft, so natural oils are unable to coat and ultimately moisturize the strands. This causes excessive dryness, so moisture needs to be added in the form of co-washes, conditioners, butters, oils and creams. Several Black-owned brands have formulated products that address the specificity of these attributes.

Oil, specifically Haitian black castor oil, is the signature product of Kreyol Essence. It’s what earned the company an investment deal on “Shark Tank” and what allowed it to provide jobs to castor seed farmers in Haiti. Locals have used the seeds for many purposes for generations: to moisturize their hair and bodies, as a healing salve for injuries, and for digestive health. Castor seeds are grown in various parts of the Caribbean, but in Haiti they are traditionally hand-roasted, ground and cooked, producing an unrefined oil.

“This is something that is so native from our culture, and it’s part of our everyday life in Haiti,” said Yve-Car Momperousse, 39, the Haitian American co-founder of Kreyol Essence, named after the dominant language of Haiti.

After embarking on her own natural-hair journey, and subsequently having her virgin hair damaged by a beautician, Momperousse turned to a well-known local Haitian salve, lwil maskriti seeds, rich in nutrients and fatty acids. She then realized that she could build a business around these ingredients, which would also stimulate the rural Haitian community by connecting with farmers — many of whom are women — who were already growing castor plants.

“This is something that they made,” Momperousse said. “It’s a point of respect for them to see something beautifully packaged. That helps with their self-esteem, too. They ask, ‘Who is buying all of this, and are they as proud of the end product as we are?’ ”

After Kreyol Essence expanded its operations nationally, it made history this past spring as the first Haitian beauty brand on QVC.

“For so long, Haiti has had to fight the stigma of being the poorest country in the Western Hemisphere,” she said. “So, dealing with discrimination, to be able to show a different side of Haiti, to show something that’s beautiful and that people want to receive is a huge deal for us.”

A chance to ‘take back our power’

“You’re inspiring this next generation of Black women to sustain themselves outside of corporate America,” Donaldson said in an interview before she died from breast cancer in November. “All of this talent, for the longest time, would go to waste because we would get passed over for promotions. We’d get passed over for leadership and senior management and as the head of corporations. This movement has really given us the opportunity to take back our power.”

Donaldson, a Harvard-educated lawyer, developed her brand after writing her first book, “Thank God I’m Natural.” Almost 20 years ago, after she stopped relaxing her hair and learned to embrace her kinks and curls, she had an aha moment.

“It was like, ‘Thank God I’m natural,’” she said. “Thank God I can go swimming, not sit in the hair salon; walk in the rain. I can do all of these things.”

The politics of black hair

Today, wearing natural Black hair is a statement of pride, a repudiation of an imposed beauty standard and a determined declaration of Black identity. Further emboldened by the passage of the Crown Act in 2019, which banned discrimination based on hairstyle and texture and has now been adopted by 14 states, Black women now have the cultural, and legal, right to wear their hair in a manner of their choosing.

For a long time, many people in African American communities believed that mainstream hair care companies lacked high-quality customer service and took their Black customers for granted. As a result, Black-owned companies are held to a higher standard by their consumers, who expect a certain level of authenticity and efficacy.

“We’re just so used to companies not really caring about us,” White said. “They think we’ll accept anything. People know we will spend a lot of money on our beauty care. With Melanin Haircare, we wanted to give the community a quality brand that didn’t pander, that knows what they need and serves it to them at an affordable price.”

Because many Black-owned hair care companies started with the intention to help Black women, philanthropy is often a part of their mission. After the devastating earthquake in Haiti, Kreyol Essence donated money to two hospitals in the affected area and used a QVC broadcast to raise awareness among the network’s audience.

Mielle’s More Than a Strand initiative helps female entrepreneurs with funding and resources to get their ventures off the ground. Through its Global Certificate Program, as part of its partnership with Rutgers University and the Newark Business Hub, the company recently allocated 60 grants to aspiring female business owners.

Tweets by @forbesindia
How to tame the elephant in the economy
Long lines, brawls, a cottage industry: Inside the mad scramble for video game consoles