Long lines outside retail stores devolving into brawls, desperate shoppers refreshing websites in a bid to outrace the bots and a cottage industry of people trading tips and making money in the process—is the state of the video game console market a year after a new generation of widely coveted devices was released during the height of the pandemic

By Kellen Browning and Julie Creswell 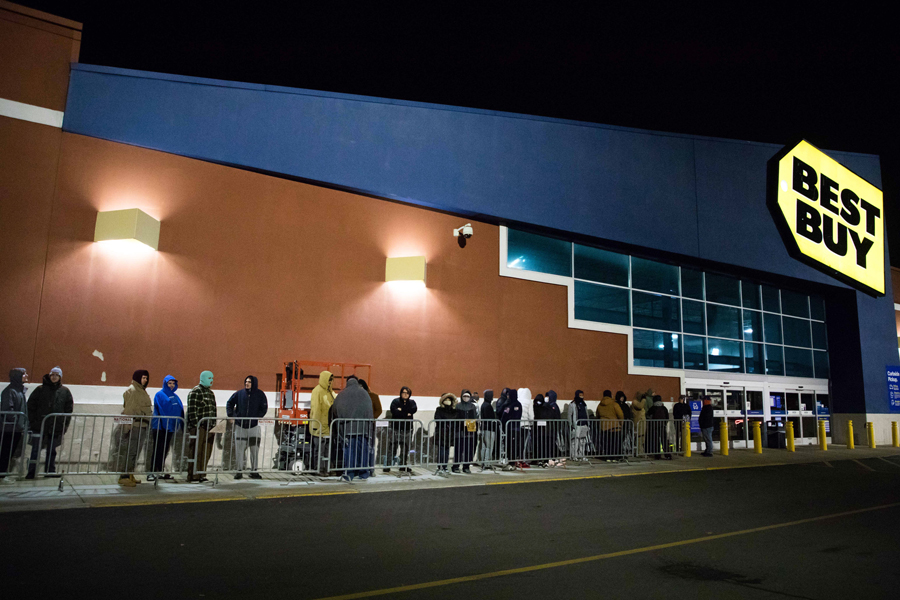 Black Friday shoppers line up before dawn on Nov. 26, 2021, at a Best Buy store in Greenwood, Ind. Some retailers like Best Buy give preferential treatment to shoppers who pay a subscription fee, but that doesn’t guarantee them a video game console. (Kaiti Sullivan/The New York Times)

At his bidding, thousands of people around the country began furiously pounding keys, jostling to get to the front of the retailer’s virtual line for this holiday season’s hottest gift: a video game console. To increase their odds, Randall recommended that the 8,000 viewers on his livestream also get in line through Walmart’s app on their phones. As the minutes ticked by, a lucky few sent Randall screenshots of their purchases. Some sent him donations — about $2,000 in total — as thanks for his help. Others were unsuccessful. In an hour, all of the consoles were sold out.

Long lines outside retail stores devolving into brawls, desperate shoppers refreshing websites in a bid to outrace the bots and a cottage industry of people like Randall trading tips and making money in the process — that is the state of the video game console market a year after a new generation of widely coveted devices was released during the height of the pandemic. The Xbox Series X from Microsoft, with a list price of $499, and the PlayStation 5 from Sony, $399, arrived as the popularity of gaming was skyrocketing with people stuck indoors, and they have been in high demand and short supply ever since.

Now, with the holiday shopping season in full swing, those same consoles remain the must-have gift on many wish lists. The result is fierce competition, both from other gamers and from people who snag as many devices as they can — sometimes using so-called purchase bots to snatch them faster than a human could — and then resell them for two or even three times the purchase price on websites like eBay or Facebook Marketplace.

“I grew up playing video games. Everyone wants to be the video game hero,” said Matt Swider, who quit his journalism job last month and now sits in his apartment in New York City, furiously scanning websites to send out alerts on Twitter to his followers whenever retailers have consoles for sale. “The villains in this story are the resellers employing bots both in person and online.”

Buying a game console this season is proving especially tricky this year. Taking a page from Amazon, retailers like Best Buy, Walmart and GameStop are, in many cases, making the consoles available first to those who pay to be part of their membership programs. Even so, paying about $200 a year to Best Buy for a subscription is not a guarantee that shoppers will get the console. So on top of that, customers are following people on YouTube, Twitter, Twitch and Discord for hints and updates on what stores may have the items in stock or when a console may suddenly become available on a website for purchase. Then, it becomes a race to beat the bots.

Although it is normal for consoles to be elusive when they are first released, the scarcities seen in the past year are anything but. The problems stem from the well-chronicled global supply chain problems caused by the pandemic, which have made the computer chips many devices require hard to come by.

“We’re working as fast as possible with our manufacturing and retail partners to expedite production and shipping to keep up with the unprecedented demand,” Microsoft said in a statement. It declined to comment on how many consoles it has sold so far.

Sony declined to comment on the demand problems, instead referring to a recent blog post by Jim Ryan, the company’s CEO, in which he acknowledged that “the inventory constraints remain a source of frustration for many of our customers.”

“Rest assured that we are laser-focused on doing everything in our power to ship as many units as possible,” Ryan wrote. Sony said in a September quarterly earnings report that it had sold 13.4 million PlayStation 5s since it was released in November 2020.

David Gibson, a senior analyst for the Australia-based financial services company MST Financial, estimated that by the end of the year, Sony will have shipped 19 million consoles since the PlayStation 5 was released, and Microsoft around 11 million to 12 million, boosted in part by the release of its flagship game, "Halo." But he said both companies could have sold far more had the pandemic not put the squeeze on global supply chains. The “console market will not able to catch up with demand until late 2022, if at all,” he said.

Shortly after PlayStation 5 was first released, Swider, then the U.S. editor-in-chief of TechRadar, a technology reviewing and recommendation website, was frustrated in his own attempts to purchase one. So he began tracking and tweeting when he would find game consoles for sale.

He started getting tips from employees inside retailers like Best Buy and Walmart when a shipment of consoles arrived at individual stores or regional warehouses. At the end of last year, he had 21,000 followers on his Twitter account; now he has more than 1 million.

He estimated that he has helped more than 130,000 people obtain a console this year. In return, he hopes to make money by charging $5 a month for subscribers to his new Substack newsletter, called “The Shortcut,” that will offer recommendations on technology and tips on how to find a console or other electronics. When his followers use his links to purchase items on various retailer websites, he can earn a commission, so-called “affiliate fees” on those sales.

Another retail sleuth, Randall, said he did not make money from commissions but does make money from his hourslong livestreams on YouTube, which offer hints on when retailers may release consoles and tricks and tips on how to buy one. Randall, who cannot work a typical job because he has cystic fibrosis, said the streams were about more than just helping frustrated parents or gamers land the hot consoles.

Some gamers have used the tips successfully.

Jeff Mahoney, a 38-year-old in Katy, Texas, said he had procured at least five PlayStations and two Xboxes by monitoring the Discord channel run by “Lord Restock,” who is really a 21-year-old philosophy student at the University of Tampa who, when contacted, asked to remain anonymous because he did not want to be targeted online by the resellers. After acquiring a PlayStation for himself, Mahoney, who works at the accounting firm KPMG, said he was able to buy the other devices for neighbors who wanted holiday gifts for their children.

“I’m like, ‘Hey, you’re not going to go out and pay $800 to some scalpers who’s using bots and making life miserable for everybody else,’” he said. “I’m just here to help out.”

Tweets by @forbesindia
Meet the black women making waves in hair care
Could green walls be a solution for building insulation?