While the queen has gone back to work since Philip's death, she is never going to return to the hectic schedule of meetings, receptions and garden parties that she plowed through for decades 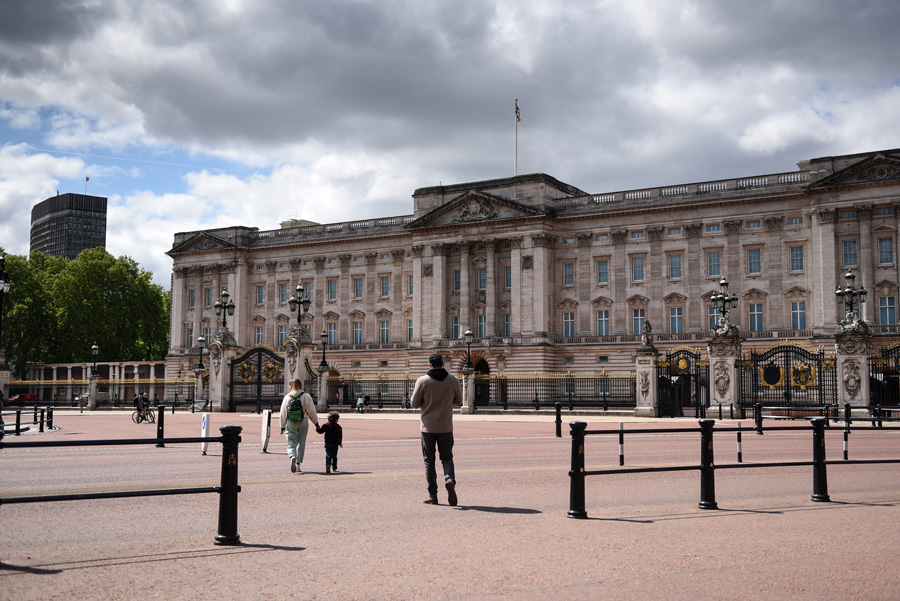 A handful of tourists outside Buckingham Palace in London in the early months of the pandemic, May 13, 2020. The passing of Prince Philip has given new urgency to a transition already underway in the House of Windsor, with Queen Elizabeth II's reign in its twilight and Prince Charles moving to streamline the royal family. (Mary Turner/The New York Times).

Queen Elizabeth II turned 95 last week, four days after burying her husband, Prince Philip, and with him the partnership that guided Britain’s royal family for nearly 70 years. Now, as the queen faces the future alone, her son and heir, Prince Charles, is reshaping the family to carry on after her.

Philip’s death has given new urgency to a transition already underway in the House of Windsor. With the queen’s reign in its twilight, Charles has moved to streamline the royal family and reallocate its duties — a downsizing forced by the loss of stalwart figures like Philip, as well as by the rancorous departure of Prince Harry and his wife, Meghan, and the messy internal exile of Prince Andrew.

Buckingham Palace is conducting an after-action report on Philip’s funeral ceremony, people with knowledge of the palace said, applying lessons from it to Operation London Bridge, the long-in-the-works, minute-by-minute blueprint for what will transpire in the days and weeks after the queen dies.

By all accounts, Elizabeth is in good health, bothered only by stiffness in her knees, which makes it hard for her to climb stairs. Royal watchers point out that her mother lived until 101. Buckingham Palace is busy planning her platinum jubilee, a four-day celebration in June 2022 to mark the 70 years since her accession to the throne.

Still, the poignant image of an aging, isolated queen, grieving alone in a choir stall at St. George’s chapel during the funeral because of social distancing restrictions, drove home to many a sense of her vulnerability and fragility. It also raised questions about how active she will be, even after the pandemic ebbs.

“Fundamentally, the queen will fade away gracefully,” said Peter Hunt, a former royal correspondent for the BBC. “COVID has helped in the sense that it has accelerated what any sensible 95-year-old woman would want to do, which is not stand on your feet all day long.”

As always with the royal family, details about its internal deliberations are elusive and befogged in speculation. Reports that Charles and William would hold a summit meeting to hash out the transition are pooh-poohed by people with ties to the palace.

While the queen has gone back to work since Philip’s death, she is never going to return to the hectic schedule of meetings, receptions and garden parties that she plowed through for decades. She may come to Buckingham Palace only two days a week for meetings, these people said, preferring to stay at Windsor Castle, where she and Philip quarantined during the pandemic.

The queen conducted multiple meetings by video calls over the last year, showing off a wry wit in some of those virtual encounters. Like others who worked from home, she adjusted to the new environment, a person with ties to the palace said, and is not reflexively returning to the office just because it is reopening.

Charles, as Prince of Wales, had already taken over some of his mother’s duties, including overseas trips and investiture ceremonies, in which people are granted knighthoods. He accompanies her to the state opening of Parliament; the next one is scheduled for May. And he spoke up after the furor over his brother Andrew’s ties to disgraced financier Jeffrey Epstein, pressing to have him banished from public duties.

The biggest challenge for Charles is reconciling the family’s workload with its reduced ranks. He has long favored a slimmed-down monarchy, built around him and his wife, Camilla; Prince William and his wife, Kate; and Harry and his wife, Meghan. Princess Anne, his younger sister, also remains a full-time royal.

But the decision of Harry and Meghan to withdraw from their duties and move to California blew a hole in those plans. There was no sign of a change of heart from Harry, or even much hope for a reconciliation with William, when Harry attended his grandfather’s funeral. The brothers chatted briefly as they left the service, but Harry flew home before the queen’s birthday on Wednesday.

There is also little prospect that Andrew will ever return to the fold. If anything, the palace is girding itself for further embarrassing disclosures this July when his friend Ghislaine Maxwell goes on trial in New York on charges that she trafficked underage girls on behalf of her employer, Epstein. Andrew has been accused of sexual misconduct by one of Epstein’s victims, an accusation that he denies.

“You’re not going to get a situation on the balcony at Buckingham Palace, where people are pushing and shoving for a place,” said Andrew Morton, a royal chronicler whose latest book, “Elizabeth & Margaret,” explores the relationship between the queen and her sister. “It’s going to be down to just a handful of people.”

Royals carry out more than 2,000 official events a year, many of which involve charity groups. About 3,000 philanthropic groups list a member of the family as their patron or president, according to the palace. Family members also take part in dozens of military and diplomatic ceremonies a year.

With so many events and fewer working royals, Morton said to the Foreign Press Association, the family will have to pick its shots. Given its commitment to the military — showcased by the troops at Philip’s funeral — and its diplomatic responsibilities, he predicted that the family would scale back its charity work.

But that would raise a separate set of problems. The modern royal family, experts said, has defined itself and justified its taxpayer support largely through its public works. Philip, the Duke of Edinburgh, maintained ties to hundreds of charities until he retired from official duties at the age of 96.

The short-term fix for the workload problem, people with ties to the palace said, is to elevate another royal couple, Prince Edward and his wife, Sophie, also known as the Earl and Countess of Wessex. Edward, 57, the queen’s youngest son, and his wife emerged as prominent figures after Philip’s death, speaking about his legacy and how the family was dealing with its grief.

Charles found his stature enhanced by the funeral, according to royal watchers. Some pointed to the dignified way he carried himself as he headed the procession behind Philip’s coffin. Others noted his unselfconscious display of grief. At 72, they said, Charles had finally emerged from the long shadow of his father, with whom he had a complicated relationship, to be the family’s patriarch.

“He’s looking like a much more confident character, happier in his own skin,” said Penny Junor, a royal historian. “He is now the paterfamilias of the family, which means he has new roles and responsibilities.”

Tweets by @forbes_india
Photo of the Day: Refilling to live
India's Covid-19 vaccines can definitely be cheaper. Will its makers agree?