India's Covid-19 vaccines can definitely be cheaper. Will its makers agree?

As vaccine manufacturers announce higher prices for states and the private sector, we find out that it's actually possible to make vaccines affordable. A look at the factors that influence prices, and who stands to benefit 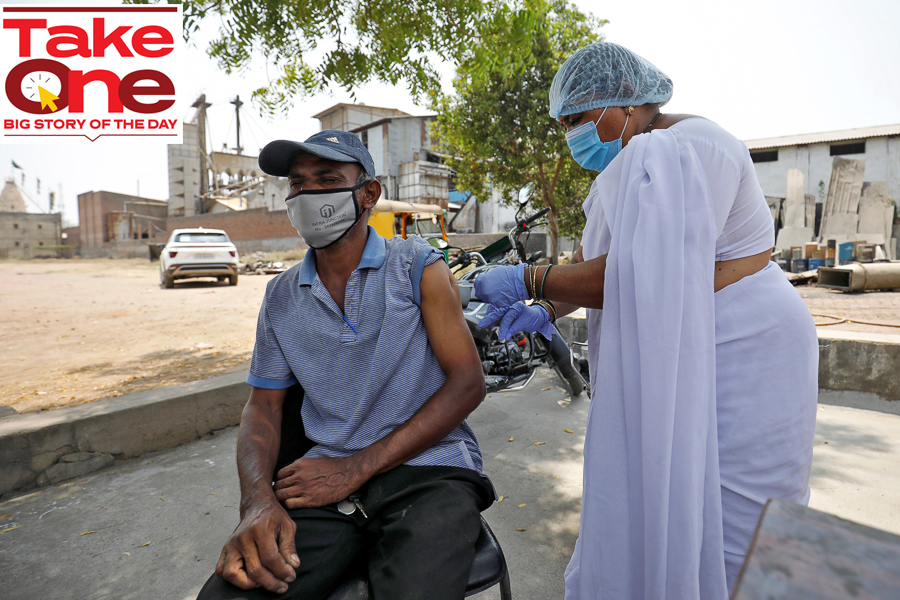 A rice mill worker receives a dose of Covishield, a coronavirus disease (Covid-19) vaccine manufactured by Serum Institute of India, during a Covid-19 vaccination drive at Bavla village on the outskirts of Ahmedabad, India, April 13, 2021. Credit: Amit Dave / Reuters

It’s been a gloomy few weeks in India.Across cities and towns, a raging second wave of the Covid-19 pandemic has wreaked havoc and brought its crippled health care sector to its knees. Many states have resorted to lockdowns to restrict movement, as beds, ventilators, and even oxygen supply run short. In April alone, over 30,000 people have died, as daily cases surged from less than 15,000 on March 1, to 3.5 lakh on April 26. That number is expected to swell in the coming weeks, even as questions have been raised about its veracity, with inadequate testing, and underreporting of death in some states.Amidst all this, the Narendra Modi government is desperately trying to ramp up vaccinations, to bring some reprieve to the situation. Perhaps taking a cue from Israel’s successful vaccination policy, and vaccine hesitancy among many Indians, the government now reckons that vaccinating a wider group as quickly as possible is key to ending the pandemic, even though it had initially envisaged an entirely different vaccination programme. The initial plan was to vaccinate 300 million people, including health care and frontline workers by July, before vaccinating everyone else.

From May 1, some 60 percent of the population will be eligible for vaccinations, even as concerns have been raised about the availability of vaccines. India is undertaking the world’s largest vaccination programme, and only last week extended it to those between the age of 18 and 45, who account for more than 40 percent of the population.
For this, the central government has shifted control of the vaccination programme to state governments and the private sector, which it reckons will help ramp up vaccine coverage. “It would also make pricing, procurement, eligibility and administration of vaccines open and flexible, allowing all stakeholders the flexibility to customise to local needs and dynamics,” the government said at the time of announcing the new vaccine policy. 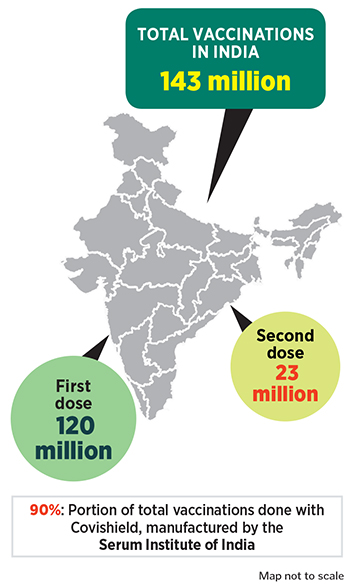 India had begun vaccinations on January 16 and has vaccinated 143 million people. Of these, 23 million have received both doses, while 120 million have received the first dose of either Covishield, manufactured by the Serum Institute of India (SII), or Covaxin, developed by Bharat Biotech.
Since the new plan was announced, SII and Bharat Biotech have announced prices for the private sector and state governments: SII will sell Covishield for Rs 400 per dose to state governments and at Rs 600 per dose to private hospitals, while Bharat Biotech has pegged prices at Rs 600 per dose for state governments and Rs 1,200 for private hospitals.
A third vaccine, Russia’s Sputnik V, was approved by India’s drug regulator in mid-April, and its first batch is expected in the country on May 1. While Dr Reddy’s Laboratories, which owns the exclusive marketing and distribution rights to sell it in India, is yet to announce a price, the vaccine is expected to cost less than $10 (Rs 750).
“The price of the vaccine is still lower than a lot of other medical treatment and essentials required to treat Covid-19 and other life-threatening diseases,” said Adar Poonawalla, CEO of SII, in a statement after his company drew flak for its pricing, much of which was because the company had been selling the vaccine to the central government for Rs 150 per dose.
Are vaccine manufacturers making money?
SII and Bharat Biotech have drawn flak for the significant difference in their procurement prices for the central government vis-a-vis state governments and private channels. Questions are also being raised about the companies amassing profits amidst a pandemic.
“Considering the economic cost one is paying for Covid-19, there is certainly value at the price at which companies are offering the vaccines,” says Vishal Manchanda, research analyst for pharma at Nirmal Bang Institutional Equities Research. “However, the surge in price from Rs 150 to Rs 600 seems a bit exorbitant. $1 or $2 per dose is a price that we do get to see in the vaccine space and doesn't seem to be off the mark. The huge demand for Covid-19 vaccines allows vaccine producers to operate at a much larger scale than other vaccines they produce, which should significantly help them lower their manufacturing costs per dose.” 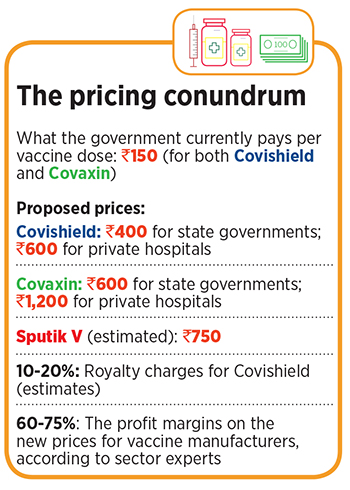 The central government, which is doling out vaccines for free, has been purchasing the vaccines at Rs 150 per dose from SII and Bharat Biotech. This means, SII’s rates for the state government and private channels are 166 percent and 300 percent higher respectively, while Bharat Biotech’s prices are 300 percent and 700 percent higher.
Last week, Poonawalla had clarified that SII will soon start selling the vaccines to the central government at Rs 400, once it completes its initial commitment. “Please understand the Rs 150 price which is being thrown around has been for the central government for prior commitments and contracts,” he told CNBC TV18. “After that ceases to exist, after we supply about 100 million doses to them, which was ordered in bulk a long time ago, we will also charge Rs 400 to any government.” However, on April 24, the Ministry of Health and Family Welfare confirmed on Twitter that the procurement cost will continue to be Rs 150.
Over the past week, various state governments have begun negotiations with the vaccine makers. So far, 24 of them have announced that they will be giving the vaccines for free in the state, in line with the central government’s ongoing vaccination programme.
According to Poonawalla’s estimates, the pricing of Rs 150 has been loss-making for him, especially since the company is looking to invest in ramping up production capacity. In January, a fire at an upcoming SII facility also caused damages of Rs 1,000 crore. “We are losing money at the central government's mandated price of Rs 150 per dose,” he told CNBC TV18. “We have to pay 50 percent of the price to AstraZeneca as royalty.”
The privately held SII hasn’t disclosed its financial deal with AstraZeneca, which was roped in by the British government to sell the Oxford vaccine. At the time of the deal, a senior official at the company had told Forbes India that the deal involved an upfront payment for selling the vaccine.
“Typically, companies have to pay royalties, and that ranges between 10 and 15 percent,” says an analyst with a domestic brokerage in Mumbai. “So it’s unlikely that SII is paying such a hefty amount. Rs 150 is a break-even rate, and when it reaches Rs 600 or Rs 400, it will be highly margin equitable. Their production cost will remain the same, and if you factor in distribution rates, you make around 75 percent of margin at Rs 600.” This means a profit of Rs 450 per dose. SII has not responded to a questionnaire from Forbes India in this matter.
“For global vaccine makers such as SII, the Ebidta margin [earnings before interest, taxes, depreciation, and amortisation] on vaccines is between 40 and 50 percent,” says another analyst with a domestic brokerage who did not wish to be named. “Those vaccines are priced cheaper, in the range of $1 or $2, like in the case of polio. In this case, with prices on the higher level, and per unit cost being directly related to scale of manufacturing, the Ebidta margin is definitely around 75 percent.” 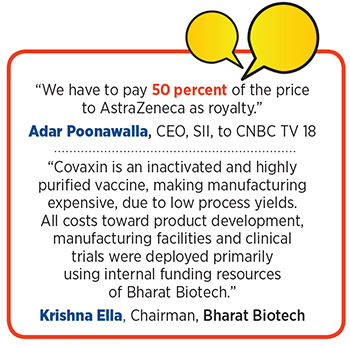