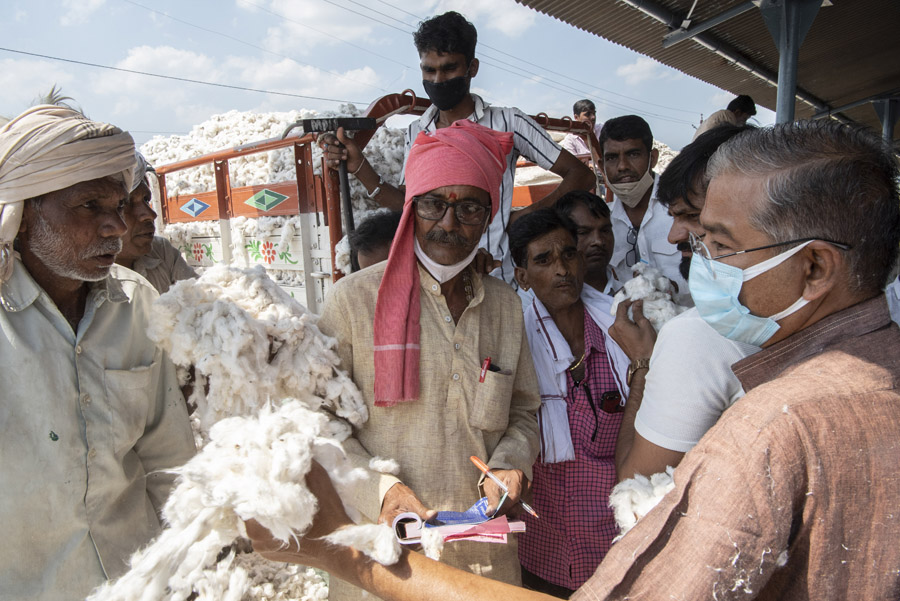 Farmers display the cotton they have harvested to buyers at the Khargone mandi, a large auction market, in Khargone, India, Oct. 23, 2021. The organic cotton movement in India appears to be booming, but much of this growth is fake, say those who source, process and grow the cotton. (Saumya Khandelwal/The New York Times)

With the fashion industry trumpeting its sustainability commitments, those labels are both a means of value signaling and a lure to consumers willing to pay more to act better.

There’s only one problem: Much of the “organic cotton” that makes it to store shelves may not actually be organic at all.

However, much of this growth is fake, say Indians who source, process and grow organic cotton.

At the heart of the problem is an opaque certification system rife with opportunities for fraud. Consumers are assured of “organic” material by brands, which rely on official stamps of approval from external organizations. Those in turn rely on reports from opaque local inspection agencies that base their conclusions on a single planned yearly inspection (in the case of the facilities) or a few random visits (for farms).

In recent months, the credibility of these inspection agencies has been destroyed. In November, the European Union voted to no longer accept Indian organic exports certified by the main companies responsible for organic cotton: Control Union, EcoCert and OneCert. And in January, the international agency that provides accreditation to organic inspection agencies, IOAS, withdrew OneCert’s ability to inspect and certify cotton processors for these labels.

Crispin Argento, founder and managing director of the Sourcery, a small consulting firm that helps brands source organic cotton, has spent the past year hunting down organic cotton with his team only to see suppliers disappear when they start asking for proof of authenticity. He estimates between one half and four-fifths of what is being sold as organic cotton from India is not genuine. And almost the entire supply chain is implicated in what he calls a game of “smoke and mirrors.”

For at least a decade, in reports and at conferences convened by agitated large brands and the network of nongovernmental organizations that serve them, the organic cotton industry in India has been described as in “crisis,” but the problems have been kept largely out of the public eye.

NGO workers worry exposure would lead to the total collapse of the industry and harm the small subset of farmers who are, in fact, growing organically. They also fear the wrath of Prime Minister Narendra Modi’s government, which has come down hard on those who dare to criticize the country. Others are profiting handsomely from the certification system.

When confronted with the allegations of fraud, many fashion brands and their sourcing partners that use Indian organic cotton admitted that the system wasn’t perfect but affirmed their commitment to organic cotton and said any problems that existed were located outside their own supply chains.

A spokesperson for PVH, the owner of Tommy Hilfiger, wrote in an emailed statement that organic cotton was one of a variety of sustainable materials they had committed to sourcing and noted, “We know that rigorous standards and reliable verification processes are critical for sourcing sustainable materials.” Michael Kors and Urban Outfitters did not respond to emails requesting comment on their organic cotton sourcing.

At least one brand has decided it no longer wants to look the other way, however. Though organic cotton used to be a centerpiece of its commitments, the womenswear brand Eileen Fisher now has a page on its website describing why it is moving away from certified organic cotton, the better to address what the brand calls “an uncomfortable fact.”

“The ‘organic’ cotton that’s sold each year far exceeds the amount that is actually grown,” it says.

The two main links in the long supply chain between farmers and shoppers are Western organizations that provide organic cotton labels, and local inspection offices.

In India as well as other cotton-producing countries, GOTS and Textile Exchange certification starts at the gin, where the cotton fiber is separated from the seed. A paper transaction certificate is issued each time the cotton is sold along the supply chain: from the gin to a certified spinner, where the fibers become thread; to a certified mill, where the threads become fabric; and on until it lands in the form of a shirt or sheet set in a store near you.

But neither GOTS nor Textile Exchange perform inspections themselves. Instead, they use the local offices of international inspection businesses, including OneCert, EcoCert and the behemoth Control Union, which certifies more than 100 programs in 70 countries, to verify claims.

These businesses are paid by the very ginners, spinners and farmers they are supposed to be policing. They produce a paper certificate, which is sent to GOTS and Textile Exchange, who pass on the paper to clothing manufacturers, who pass it on to brands.

Insiders call this system “trading paper,” and say that at each step, there is little to stop a facility from selling a pile of conventional cotton as organic, then changing a paper transaction certificate to match the larger volume. Inspectors visit once a year only to verify that a facility is capable of following protocol for keeping organic cotton separate — they do not inspect all the cotton moving through. Furthermore, there is no central database to look up the transaction numbers to make sure a certificate hasn’t already been used. In this way, the volume of certified organic cotton doubles, triples or even quadruples as it moves up through the supply chain.

The U.S. Department of Agriculture terminated its agreement last year to recognize organic products certified by companies that are overseen by the Indian authority, citing the government body’s lack of transparency. All such companies in India must now be accredited by the USDA’s National Organic Program standards.

In November, the European Union started rejecting Indian organic exports certified by five companies — including Control Union, EcoCert and OneCert — after shipments of sesame were found to contain a carcinogenic substance. Chastened by the U.S. and EU actions, the Indian government also fined the companies and barred them from registering new processors or exporters.

This problem is not confined to India, experts say; questions have been raised about organic cotton from China and Turkey, which account for another quarter of the global supply. And the organization that audits and certifies the certifiers, IOAS, withdrew OneCert’s ability to inspect and approve cotton-processing facilities globally in January.

At this point, some industry insiders believe the only way for a brand to ensure its organic cotton is actually organic is to invest in farmers directly through credible organizations before any seed is even sown.

Tweets by @forbesindia
Icons @30: Those who just missed the list
Twitter expands Safety Mode, but not to India; Microsoft launches Surface Laptop Studio; Offgrid out of stealth with ZincGel