Can A Vaccine Prevent Cervical Cancer?

Cervical cancer is a major threat to India. But can vaccinations really prevent it? 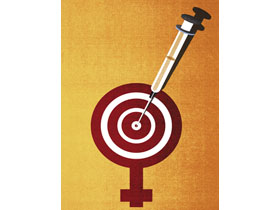 A WHO Summary report on the human papilloma virus HPV and cervical cancer statistics in India 2010 set the ball rolling on the absolute need to address the issue. According to the report, 74,000 women die from cervical cancer in India each year. The report says that Indian women are in the highest risk category for cervical cancer in the world.

City Slickers Have It Easy
Does the urban elite woman really need the vaccine? Not really, as she does not come under the high risk category for vaccination. At the same time if she gets the vaccine, it would merely add to her expenses without any health downside. The vaccines currently available are at a price bracket of Rs. 2,800 and Rs. 3,300 per dose. Each woman would need three doses which would cost her Rs. 8,400 to Rs. 9,900 depending on which brand of vaccine she chooses.

The Rural Paradox
Poor hygiene and multiple partners are two of the many causes of cervical cancer. The most common one, which accounts for 1,08,900 affected cases, is HPV and its strains 16 and 18. So it is entirely possible that the rural woman may already be infected with the virus before she gets
vaccinated.

Catch them Young
If you vaccinate adolescent girls, will they get lifelong immunity to cervical cancer? Not really. Of the 1,32,000 infected cases of cervical cancer in India, 23,100 have contracted the cancer due to another cause and not the HPV-causing strains. So if you vaccinate them young, they will have antibodies, but there is no guarantee of how long these antibodies will last, and whether they will need a booster shot at a later stage.
Government’s Role
A study by the Catalan Institute of Oncology, Spain, on cervical cancer and HPV in India concluded that if you vaccinate 70 percent of Indian women (approximately 399,000,000) against the HPV 16 and 18 strains, the reduction in lifetime cancer risk was 44 percent. Yet a study by Partha Basu and Debjani Chowdhury of the Department of Gynaecological Oncology, Chittaranjan National Cancer Institute, Kolkata, found the government has not done much in terms of implementing a programme against this form of cancer.
Don’t Forget the Men!
Anal and penile cancer is said to be caused by strains of the HPV virus too. Strain 6 and 11, particularly, are known to cause genital warts. Only Gardasil, from Merck & Co., protects against strains 6 and 11 and Cervarix, from GSK, only protects against the 16 and 18 strains of HPV. Put together, these vaccines only protect men from two to four of the more than 100 strains of the HPV virus. With at least 39,600 men affected by anal cancer in India each year, and with an LGBT population of at least 30 million, you cannot negate the need for the vaccine among men. But then again, the vaccine is not fail proof.

Tweets by @forbesindia
Volkswagen India's Joerg Mueller: I Have Learnt To Be An Indian In Some Ways
Will the Cyber Rakesh Jhunjhunwala Please Stand Up?