When No One's Watching

No bill, no cashier, no penalty. Indonesia set up unmanned honesty cafes, where patrons simply put the money in bag. Would similar honour systems work in India?

Opportunity to Cheat
Dan Ariely, a behavioural economist, says about Indonesia’s experiment in a blog on MIT’s Technology Review Web site: “With honesty cafés widespread, residents will have more temptations to cheat, more occasion to cheat, and maybe… find it easier to cheat again in other contexts.” 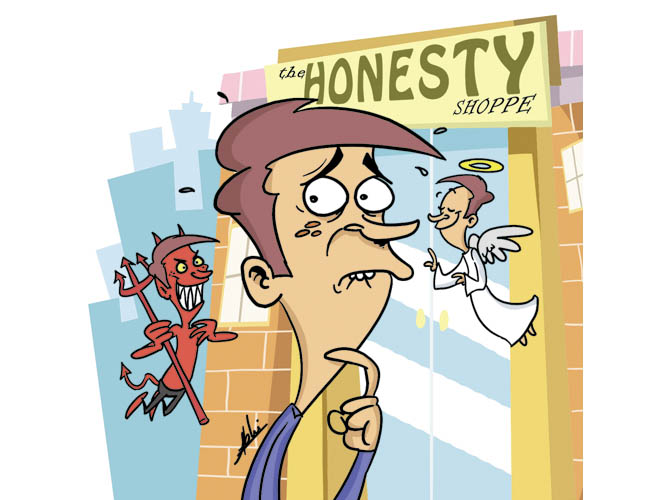 Image: Abhijeet Kini
When people sense value in complying, they don’t cheat
Community Spirit
In Kenya, a highway ashram maintained by a Gujarati trust provides free lodging to travellers for three days. When people leave, they end up donating generously — often standard hotel rates. They give out of a sense of altruism.
Free Chance
In 2007, British rock band Radiohead allowed fans to download its album In Rainbows and pay whatever they liked. According to Internet monitoring company Comscore, only 38 percent of people paid. Even though online sales exceeded the total sales for the band’s previous album, Hail to the Thief, it shows that given a chance, there will be many freeloaders.
Cops and Robbers
Schemes for voluntary disclosure of tax have not worked in India. The existence of such schemes suggests that in the ordinary course, people are not tax compliant, says Aseem Chawla, partner – Amarchand & Mangaldas & Shroff & Co. Even when it comes to wealth tax, not many are forthcoming about declaring their wealth. Honour systems will not work, because as a society, we do not have a high level of consciousness, especially in fiscal matters. We simply don’t have self discipline, Chawla says.
Shamed into Honesty
The book Freakonomics notes that rural areas have lower crime rates than cities, because a rural community tends to exert greater social incentives against crime, the main one being shame. Peer pressure plays a big role; people are less likely to cheat if others don’t, adds behavioural economist Dan Ariely. In 1989, Zodiac Grill, a restaurant in hotel Taj Mahal, Mumbai, invited food critics and High Networth Individuals to try the food. The guests voluntarily paid prices close to the actual price of the dish.