The debate over the veracity of global warming may be judged not by pure science but rather, perception. Being in a warm room can make the idea of global warming seem more likely, according to Clayton Critcher, assistant professor of marketing.

A new study co-authored by Critcher finds that when people feel warmer—either because they are out in the hot sun or because they are in an overheated room—they believe in global warming more. The findings were published online in the Journal of Personality and Social Psychology on Jan. 20. Jane Risen, assistant professor of behavioral science at the University of Chicago’s Booth School of Business, is the co-author. 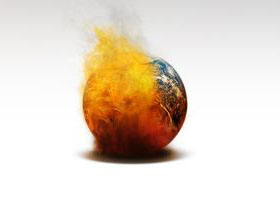 “These findings suggest a new persuasive tactic – one that can be used to assist with the dissemination of expert opinion; unfortunately, it can also be used more sinisterly to create unjustified public skepticism,” says Critcher.

Participants in one study who were asked to answer a questionnaire outdoors were more likely to report that global warming is a proven fact the higher the outdoor temperature. To confirm that the feeling of warmth is what sways participants’ views, rather than the hot weather itself as evidence of a warming planet, the researchers conducted the same experiment indoors.

They found that participants answering the questionnaire in a heated cubicle were more likely to believe in global warming, suggesting that it was the experience of heat, not the information that it conveyed, that impacted people’s beliefs.

"When a student is sick with anxiety about an upcoming test, the prospect of failure is easy to imagine. Similarly, when a person is feeling warm, it is easier to imagine what global warming would feel like. This ease of simulation makes global warming feel imminent," says Critcher.

Critcher and Risen then tested the idea that feeling warm allows people to form a sharper image in their minds of a world becoming hotter, which in turn intensifies people’s beliefs in global warming.

Participants in one experiment indicated the sharpness or dullness with which they were imagining hot arid landscapes by adjusting the clarity of photos. Those in a heated cubicle made the images of hot and arid landscapes look much sharper than did those who were in a room-temperature cubicle. Moreover, showing people clearer (versus more distorted) images of these same hot landscapes led them to believe in global warming more. In combination, this suggests that while feeling warm, people have a sharper mental image of what a hot world would be like, and the clarity of this simulation makes people more likely to believe in global warming.

These results are neither unique to the experience of feeling warm nor to the issue of global warming. In another experiment, the researchers found that participants who were led to experience thirst by eating pretzels were more likely to agree that desertification and drought will increasingly threaten people’s ability to find fresh drinking water. This further validates the finding that people will judge a certain condition of the world as more likely if it fits with what they are experiencing at that moment.