What will it take to win the collaboration app wars: massive scale or a loyal following? A case study by David Yoffie digs into the intense competition between Microsoft Teams and Salesforce's Slack 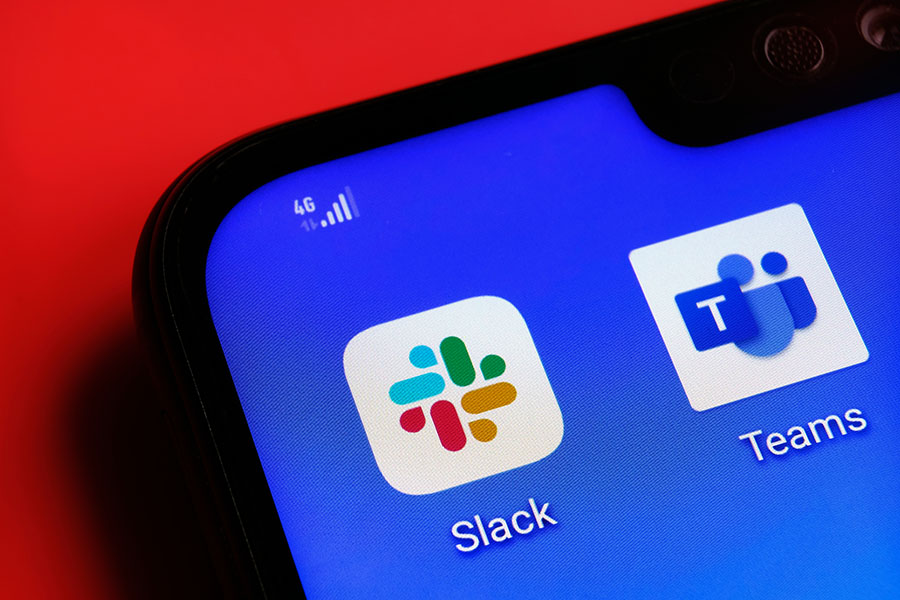 Can these collaborative software platforms become an operating system for the office—the centerpiece of how we do work? That is open at this point. It’s the dream of both Microsoft and Salesforce. Image: Shutterstock

The pandemic propelled Slack beyond its core following in the technology industry and piqued the interest of cloud computing giant Salesforce, which acquired the firm in 2021. Microsoft, meanwhile, was finally able to draw users to Teams, the free business communication platform it introduced in 2017 as part of Office 365.

Even with Salesforce’s extra muscle, Slack’s executives have puzzled over how to compete with a free rival, a new Harvard Business School case study illustrates. Now, a David-and-Goliath contest is underway, and the outcome could change how colleagues communicate, especially as remote work becomes a fixture in business. The winner is anyone’s guess, says HBS Professor David Yoffie, who co-wrote the case.

“It is a dramatic story,” says Yoffie, the Max and Doris Starr Professor of International Business and Administration. “Can these collaborative software platforms become an operating system for the office—the centerpiece of how we do work? That is open at this point. It’s the dream of both Microsoft and Salesforce.”

Yoffie and a group of MBA students at HBS used public information to analyze the competition in the case study Collaboration Wars: Slack vs. Microsoft Teams. His co-authors include 2021 graduates Kriti Gupta, Mehek Punatar, Poonam Sacheti, and Poorvi Vijay.

On paper, Microsoft appears to have the upper hand. During the two-year period the case examines, Microsoft’s revenue jumped 18 percent to $168 billion in its 2021 fiscal year compared with 2020. While Slack’s revenue climbed twice as fast at 43 percent, Microsoft’s sales still dwarfed Slack’s $903 million. And Microsoft is on track to take in more than $200 billion in 2022.

“So, you’re looking at a company that’s 200 times larger,” Yoffie says. Even counting Salesforce’s $27 billion purchase price for Slack, “it’s still a 10 to one difference.”

Also read: Salesforce goes for Slack: The M&A playbook for tech supremacyMicrosoft has a 10 to one customer advantage as well—145 million compared to 12 million—as of April 2021. And every Office 365 customer automatically gets Teams, whether they use it or not. But another number is more promising for Slack: 91 of the nation’s Fortune 100 companies had Teams, while 65 also had Slack.

Yoffie says that’s significant because all of Slack’s customers actively use the app, while Microsoft’s may or may not. Most early Slack customers were engineers and software developers, who are accustomed to team messaging.

“It’s early in the game,” Yoffie says. “We’re in the second or third inning. There’s plenty of time to develop the competition and for new outcomes to emerge.”

Microsoft plays catch up to Slack

Canadian entrepreneur and Flickr founder Stewart Butterfield launched Slack in 2014 as a work-team communications tool he hoped would be an “email killer,” as he put it. Slack made it easy for new customers to use, with a three-click signup and a bot driven by artificial intelligence that guided them through the app. Butterfield invested heavily in customer service, providing a basic service for free and paid subscriptions to an advanced version.

By 2019, Slack had 88,000 paying customers and 10 million daily users. The company hired its first sales teams to recruit large corporations.

Also read: Rattle makes a loud start. What next?

Then, COVID-19 hit. Business offices turned to remote work, and group communication made an enormous shift from largely in-person to online meetings. Zoom use soared, Teams expanded, and Slack held its own.

In the midst of the pandemic, Slack filed an antitrust complaint against Microsoft with the European Commission. A year later, in July 2021, Slack was acquired by Salesforce, the world’s largest customer-relations management software company.

Butterfield and Salesforce CEO Marc Benioff shared the same goal: Establish Slack as what Butterfield termed “the central nervous system” for workplaces. They figured Slack could be more readily adapted to a range of office software than Teams could. Slack users seemed to like its features, Yoffie says.

‘How do you compete with free?’

Yoffie says Slack’s chief challenge is the same one that other Microsoft competitors have faced: keeping a step ahead of a global giant that absorbs innovations. For most users, Teams is free and is already embedded in a system used widely around the world.

“New companies like Slack emerge with a great product, better than Microsoft has, and then Microsoft observes it, imitates it, and integrates it,” Yoffie explains. “That makes it harder for the smaller company to compete.”

Both companies added a huge number of customers from the pandemic lockdown, and Yoffie says it’s “unknown” how the end of those restrictions will affect their markets. Slack’s antitrust complaint could have a significant impact, since the European Commission has taken accusations against Microsoft seriously in the past, he says.

Yoffie adds that Salesforce’s next crucial decision is whether to keep selling Slack as a premium service, add it to a service bundle, or offer it for free.

“This is the fundamental question,” he says. “How do you compete with free?”

While neither Slack nor Microsoft collaborated on the case, the team shared their findings with Slack executives. Yoffie also keeps in touch with executives at Salesforce and Microsoft.

He says it’s also possible that the David-and-Goliath contest will eventually end in a draw.

“You can imagine a number of different scenarios, where Slack turns out to be very successful in certain segments—engineering, IT—and Teams is more successful in others,” he says. “That’s a very reasonable scenario.”

Tweets by @forbesindia
Dance, art and craft classes went virtual in the pandemic. Can they survive as kids go back to school?
Airbnb announces a permanent ban on parties