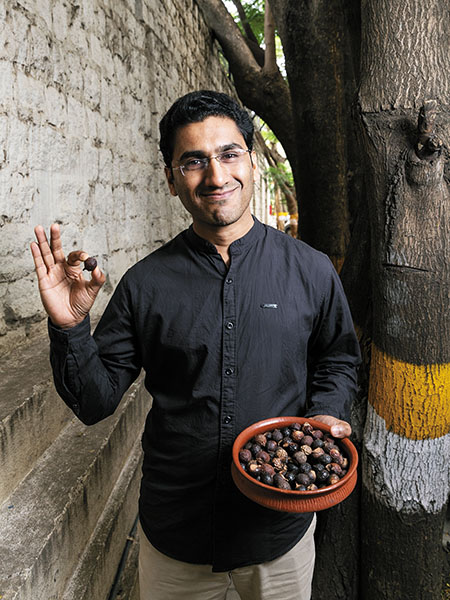 Bubblenut Wash founder Manas Nanda and his team have developed a soapnut deseeding machine
Image: Madhu Kapparath
The Bellandur Lake in Bengaluru has been a byword for pollution for locals. It is often seen frothing with a white toxic slush, triggered by 480 million litres of raw sewage that it receives from the city daily. In September, the stinking liquid surpassed the 10-foot mesh and spilled on to the roads following heavy rains. 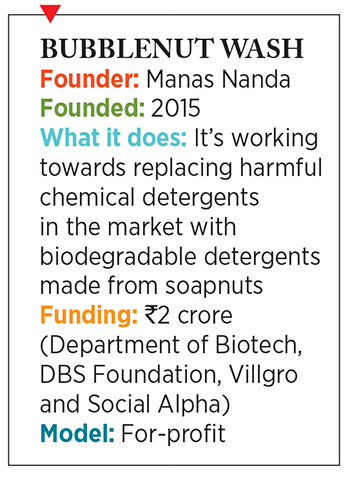 While eliminating waste from urban lives seems near-impossible, Manas Nanda, an IIT-BHU graduate who was then the product manager for rural development in tribal areas with the Art Of Living Foundation, decided to take the fight to the root of the problem: Harmful chemicals that are part of our daily personal care products and eventually find their way to sewage.

As part of the work he was doing for the Foundation, Nanda had come across soapnuts (reetha), a berry whose shell contains a natural cleaning agent. Soapnuts have saponins, which have surfactant properties, and can be used as a natural detergent replacement. “The idea was to create a financially sustainable model to commercialise these unharvested fruits and vegetables that could be useful for the urban market, while creating a living for the tribal communities. There is an immense supply of soapnuts in about 26 states in India and these were all untapped markets,” says the 34-year-old founder and CEO of Bubblenut Wash.

Bubblenut’s product portfolio includes laundry detergents, dishwash, floor cleaner, handwash, multi-purpose spray cleaner and a food and veggie wash. He launched the company in 2016 after spending a year and a half researching and developing the products.

Currently, the company is using soapnuts from Pithoragarh (Uttarakhand), Nayagarh (Odisha) and Shimoga (Karnataka). Working with tribal communities was not an easy task. “They are very hesitant to interact with outsiders, let alone work for them. We took help from the government to get in touch with these tribal groups that were already formed, and with time gained their trust. We give them three times the price that traditional traders give them,” says Nanda.

Nanda is well aware that he is up against big players like P&G and Unilever. But he’s still upbeat about his chances. “Building a brand might take years, so we don’t mind adding a B2B revenue model and supplying surfactants [made out of soapnuts] to existing detergent manufacturers. We are already getting enquiries.”

Nanda and his team have a custom-made machine to help with the deseeding of the soapnuts, and they are planning to deploy tribal communities in the work.

Bubblenut started off by focusing only on Bengaluru but its products are now available in Pune, Hyderabad, Chennai, Mumbai and Delhi, and have over 10,000 users. “This is an extremely non-glamorous segment which caters only to the needs of people, but people are increasingly becoming aware,” says Nanda.