Although a handful of Indian billionaire families have stepped up to help mitigate the pandemic's fallout, India is yet to inculcate a culture of philanthropy among the super-rich 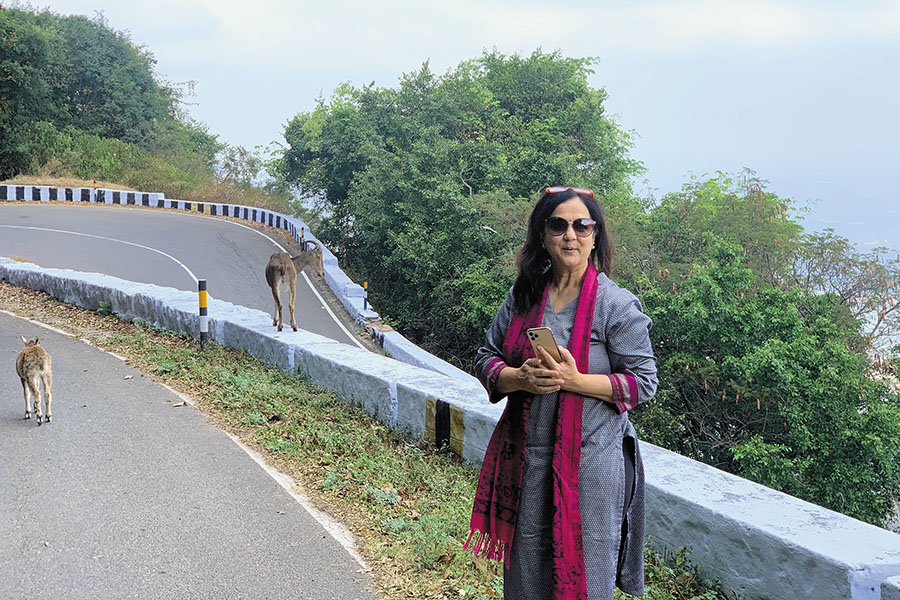 In 1918, an influenza virus emerged (probably in the US) that would spread around the world, and one of its earliest appearances in lethal form came in Philadelphia. Before that pandemic faded away in 1920, it would kill more people than any other outbreak of disease in human history.

One cannot know with certainty, but if the upper estimate of the death toll is true, as many as 8 to 10 percent of all young adults then living may have been killed by the virus. And they died with extraordinary ferocity and speed.

Yet, the story of the 1918 influenza virus is not simply one of havoc, death, and desolation, of a society fighting a war against nature superimposed on a war against another human society.

It is also a story of science, of discovery, of how one thinks, and of how one changes the way one thinks, of how amidst near-utter chaos a few men sought the coolness of contemplation, the utter calm that precedes not philosophising but grim, determined action.

When American author and historian John M Barry wrote these lines in his 2004 book, The Great Influenza, about the spread of the Spanish flu and its impact on American society, he likely didn’t anticipate the relevance his research would have 16 years later. Arguably, more so in the Indian context.

Barry writes about America of the early 1900s, when Europe dominated the fields of medical science and research. Back then, many American schools handed out medical degrees to any student who attended lectures and passed examinations; others still did not care if students failed several courses and never touched a single patient—they still got through med school. Science and religion were at odds with each other.

Through the pandemic, an important theme that emerged for America was the sudden impetus in medical research and discovery, especially the work done at the Johns Hopkins and Rockefeller institutes. In a note that Bill Gates wrote on the book in May 2020, he says that among his big takeaways for Covid-19 from the book is that philanthropy has an important role to play.

“In fact, things could have been much worse if not for the gifts of John D Rockefeller, Johns Hopkins, and many other donors,” he writes. “These gifts fundamentally transformed American science and medicine in the late 19th and early 20th centuries, giving the country hundreds of thousands of well-trained professionals to treat those who fell ill from influenza and guide the public-health response.”

In a country where medical education is largely considered a racket and where a sizeable population is taken to believe that home remedies can steel them against Covid-19, could India stand to make similar gains from the pandemic?

Released in November, the EdelGive Hurun India Philanthropy List 2020 showed that Azim Premji maintained his top spot from last year with ₹7,904 crore in donations. According to the list, Premji, through the Azim Premji Foundation, Wipro and Wipro Enterprises, committed ₹1,125 crore towards the pandemic, in addition to their regular philanthropic initiatives. This amounts to Premji having donated ₹22 crore a day.

Next on the list are HCL Technologies’ Shiv Nadar (₹795 crore to various causes), and Reliance Industries’ Mukesh Ambani (₹458 crore across causes). Reliance Industries, in March, announced a ₹500 crore donation to the PM Cares Fund for Covid-19 relief, and ₹5 crore each to the chief minister’s funds of Maharashtra and Gujarat.

Thanks to the pandemic, total donations on the list increased by 175 percent in 2020, and the number of people who donated more than ₹10 crore rose from 37 to 78. Flipkart co-founder Binny Bansal is the youngest donor on the list at 37, and the first Indian to enter the list under 40.

“Not to take away from the families that have given significantly, but a lot more needs to be done to address the real issues we are facing today,” says Neera Nundy, co-founder and managing partner, Dasra, a strategic philanthropy foundation. “Families will emerge and continue to grow in their relevance in how they shape philanthropy, especially in India. With the FCRA regulations, there’s a greater need to engage in local philanthropy.”

However, Nundy says the way in which family philanthropy will take shape in India will be different from what Hopkins and Rockefeller did in the 1900s. “I don’t think it’s going to be about putting names on institutions. What Azim Premji has been able to do in response to the crisis, for instance, has been phenomenal. They have positioned themselves to go deep into communities and fund more grassroot change,” she adds. India is in a different place for where the role of philanthropy is, she says. “How family philanthropy engages with civil society, and how civil society engages with our government for real change, that’s quite different from the US context from when Hopkins did Hopkins.” 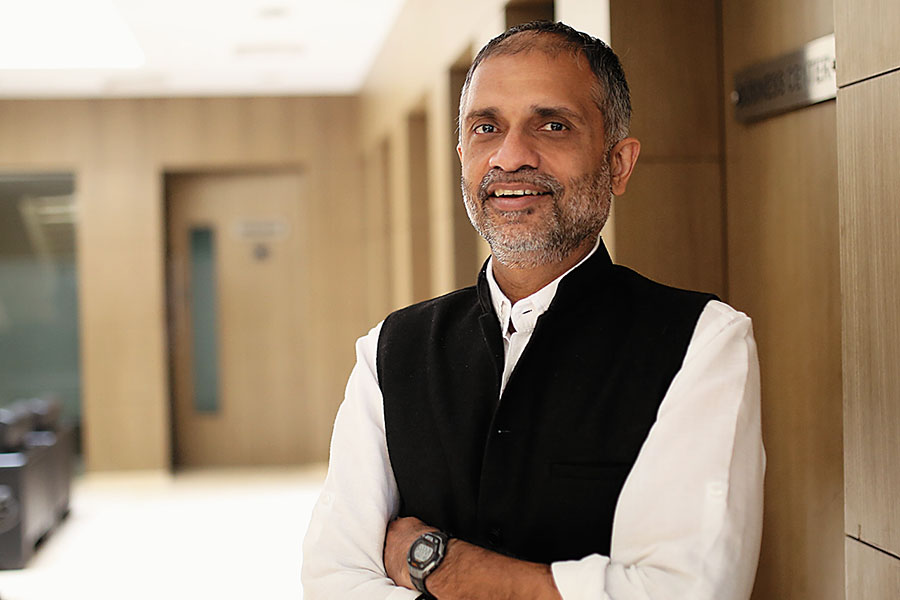 Family philanthropy, regardless, has a long way to go in India, experts agree. Culturally, Indians don’t believe in discussing their charity openly, which could also end up inspiring fewer people to put their money towards causes, for instance.

“We need much, much more philanthropy from the super wealthy. For example, only four of us have committed to the Giving Pledge in India,” says Rohini Nilekani, prominent philanthropist and founder-chairperson of the Arghyam Foundation, along with being the leading woman on the EdelGive Hurun list, with a ₹47-crore donation. Her husband, Infosys co-founder Nandan Nilekani, is number 7 with ₹159 crore given to charity. “There may be cultural reasons for this, which is fine. But we need more people to come out transparently, come forward and say a portion of their wealth belongs to society. No society can tolerate a clutch of people so wealthy that it is not used back for society.”

While philanthropy is becoming something that rich people do in India, there’s a need to bring structure to the process, and to stress the urgency in coming forward. “India could actually lead the way if more of us band together,” adds Nilekani.

“At first, everything was gloomy as this was an unprecedented global health crisis accompanied by a leadership and financial crisis, compounded by inequities in access to health care,” says Swati Piramal, vice chairperson, Piramal Group, which runs the Piramal Foundation. “Soon, it was clear that no one foundation could carry out efforts alone; what was needed was the cooperation and collaboration with the government or allied foundations. The pandemic saw the work of public-private partnerships increasing significantly.”

On the list, the Piramal family ranks number 6, having given ₹196 crore this year. Swati Piramal says she finds inspiration in learning from giving in the West, including examples such as Bill and Melinda Gates and Warren Buffet, and India has much to learn. “The Rockefeller Foundation, almost a century old, was perhaps America’s first foundation focussed on public health. Johns Hopkins is to date a leader in this sphere,” she says. “India also has a Public Health Foundation, but it is underfunded and needs more help from the government. Many public health foundations are needed to address future pandemics.”

Nilekani also believes that to solve any complex issue, the collaboration between samaaj (community), sarkar (government) and bazaar (industry) is key. Her foundation is working on a project called Societal Platform Thinking, which provides digital infrastructure to enable collaboration among various stakeholders to create impact at scale. 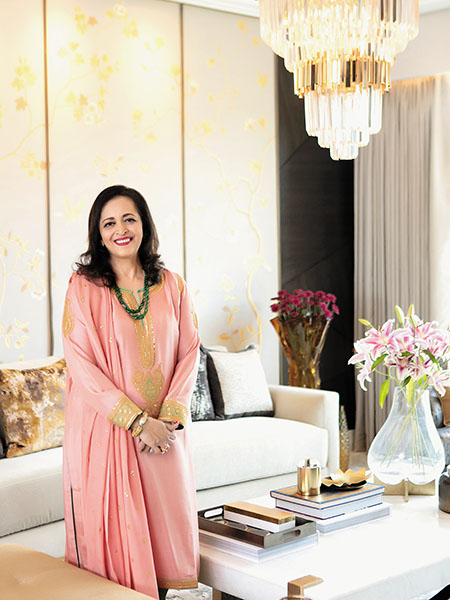 “The philanthropy sector has changed during the pandemic, as we have seen civil society’s rapid response,” Nilekani says. “I’ve always believed that we need to invest in samaaj if we want to have a successful society and prosperous nation, so that bazaar and sarkar can be more responsive in public interest. If more people are active in their citizenship, wanting to create a better society for themselves and everyone, we are more likely to be successful when the next pandemic comes about—which, unfortunately, it will.”

As the US gained in public health, medical research and education during the Spanish flu, what areas can India stand to make such gains in?

“There is no single area to focus on, but the pandemic has made clear that we cannot become an even remotely good society, strong economy or vibrant democracy unless we have a sound public health system. That should be big priority,” says Anurag Behar, CEO, Azim Premji Foundation. “Covid-19 has revealed in sharp detail that the disadvantaged and disenfranchised have been hurt disproportionately. And their distress continues, so matters such as tribal rights, gender justice, education and environment continue to be important.”

An unanticipated focus has been to uplift and support the lives of migrant workers. “The pandemic was a wake-up call for everybody to this issue, irrespective of their privilege,” Nundy says. “We saw families and business leaders converge to do something for the workers, as they began to view them as part of our own economic ecosystem. A few families leaned in in a significant way to help provide them with safety nets. This is quite different from relief work that goes on for natural disasters.”

According to Nilekani, now is the time to focus on societal resilience and social intelligence, so we can be better prepared for the next pandemic. A second area to look into is water and sanitation, closely linked to public health, and a third, to understand the relationship between human beings and wildlife, because zoonotic diseases will be part of our existence. 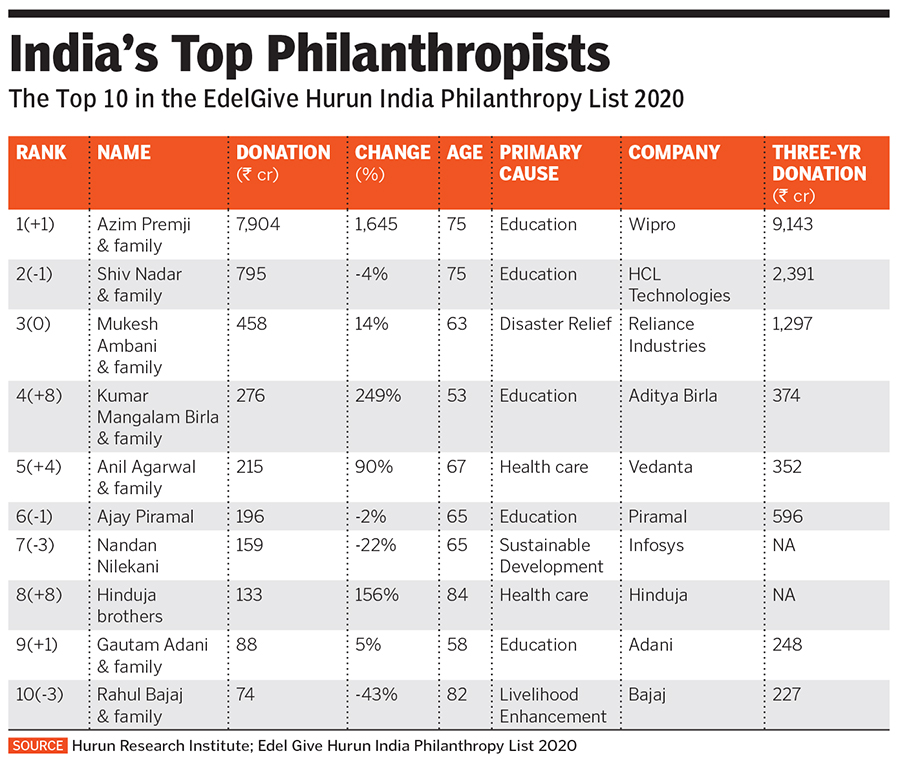 “The fourth opportunity, which Nandan is keen on, is to develop a national infrastructure for vaccine delivery, making sure it’s timely, open and inclusive,” she says. “Philanthropy can and should play a role here.”

The Azim Premji Foundation has worked across 400 districts to tackle the pandemic, involving an on-ground team of about 65,000 people. “This includes our own team members, those of partner organisations, our university alumni and government school teachers that we are engaged with,” Behar says. “The dedication, ingenuity, and courage, of the 65,000 people that I talked about, and many more such whom I am not familiar with, was just incredible. They have been working 24x7, often at risk to their lives.”

“But more importantly, we need to recognise that we need to transform things structurally such that this kind of heroism is not required,” he adds. “To paraphrase Bertolt Brecht, ‘unlucky is the society that is in the need of heroes’.”

Tweets by @forbesindia
Teenpreneurs: Made by 17-yr-olds, this paper test can detect pancreatic cancer
'In India, we will stretch our work far beyond Bollywood': BAFTA director