With an AI-based voice interface, the Bengaluru-headquartered company is looking to do away with the laptop in the CEO's cabin 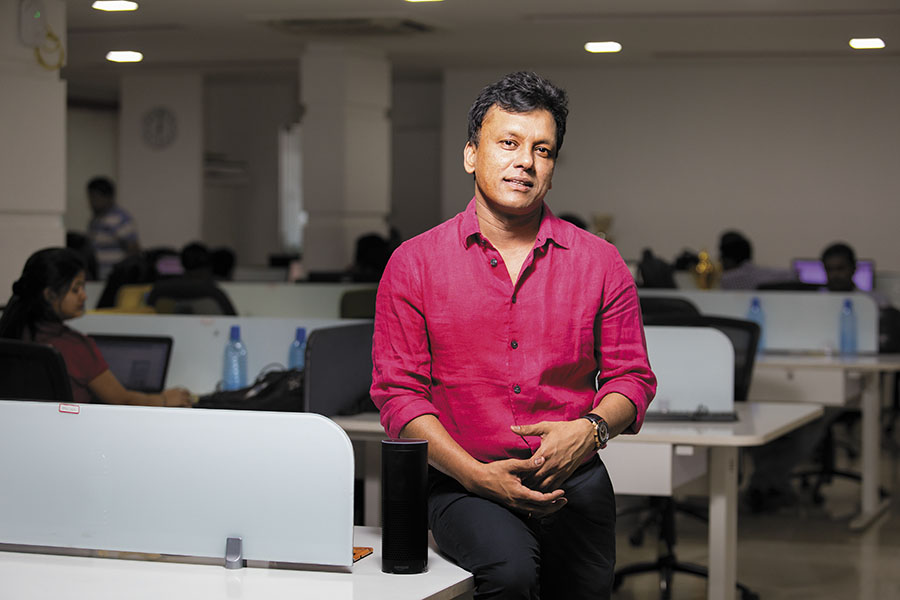 Atul Jalan, at Manthan’s office in Bengaluru. He chose the city over Silicon Valley because he wanted to create something lasting in India
Image: Selvaprakash Lakshmanan for Forbes India


Atul Jalan sees Manthan Software as his defining innings on a personal level. “I never thought I would last this long,” says the 43-year-old of his fourth venture, which he started in 2004. He can succinctly explain its raison d’être in a few words. The Bengaluru-headquartered company sells business analytics software and services to prominent chains like Danish shoe retailer Ecco, fashion retailer Charming Charlie, supermarket/grocery store chain Woolworths in Australia, and businesses with several hundreds of stores in the US and other markets. It now increasingly caters to customers in other verticals such as FMCG and pharmacy chains as well.

Manthan started out as a pure licencing revenue-based company before Jalan anticipated what its biggest customers would want and recast it as a software-as-a-service (Saas) company in 2014-15. The transition, though successful, wasn’t easy. It entailed moving from selling software for upfront money to renting it out on the internet for a recurring revenue. Jalan’s expertise and vision, however, ensured it happened without a fuss. 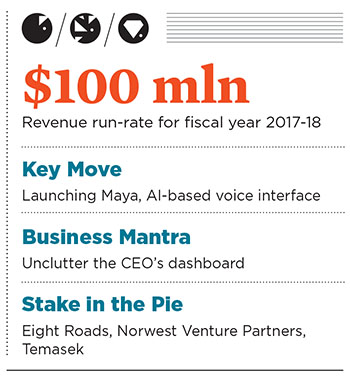 The person behind it
Bengaluru resident Jalan, who is CEO and MD of Manthan, can truly call himself a serial entrepreneur. It’s what he loves doing—building ventures that throw up breakthroughs. “This is my fourth gig,” he says of Manthan, which he started in London on the premise that analytics was going to be the last frontier in business computing. He then “almost moved” it to Silicon Valley, but eventually decided on Bengaluru because he wanted to create something lasting in India.

The early versions of business computing were about automation of business processing. Since such systems gathered a lot of data, Jalan took an early bet that “in version 2.0, that data will become the intelligent driver of the underlying business systems”. The ability to capitalise on that premise and build a product for global customers attracted marquee investors like Fidelity International, which first invested about $10 million in 2009 and has participated in subsequent rounds as well.

“He [Jalan] was an experienced entrepreneur, and gave us the confidence that his team and he could rapidly scale a product business. At that time, scaled product businesses with a globally competitive solution were rare in India,” says Raj Dugar, managing partner, Asia, at Eight Roads, the venture investment arm of Fidelity International.

Why it is a Gem
Jalan bet on analytics when it was an up-and-coming sector. A consistent feedback from customers was that “they absolutely loved what Manthan was doing”, says Dugar. It offered a full suite of products and the company was “very capital efficient”, in spite of its focus on research and development, making it a gem for investors.

“Equally, the company demonstrated great agility when it quickly and seamlessly transitioned from a licenced software solutions company to a cloud-based analytics one, based on what its customers were demanding,” adds Dugar.

A year after Manthan was established, Jalan raised seed funding from SIDBI Venture Fund (₹47 lakh, according to a VCCircle report) and by 2015, it had raised about $100 million (₹640 crore as per exchange rates today) in three rounds of funding. Its investors included IDG Venture Capital, which fully exited in 2015, apart from Eight Roads, Norwest Ventures, and Temasek.

The company, with 850 employees and offices in the US, UK, UAE and Singapore, is profitable, with a revenue run-rate of about $100 million in the current fiscal year, says Jalan. “Four years ago, we took a judgement call and pivoted lock stock and barrel to the cloud. Today we’re one of the world’s largest cloud analytics companies.”

Recently, Manthan made a big push into voice-based artificial intelligence (AI) and advanced predictive analytics. It launched Maya, an AI-powered voice interface that connects the user with the power of cloud-computing and deep learning at the other. Jalan has sent Maya to the CEOs of many of his clients, loaded it into Amazon’s Echo speakers and integrated it with Amazon’s Alexa voice platform. Maya can also work with Google Home, Microsoft’s Cortana and Apple’s Siri.

Since voice can also be used as an authentication step, the combination of Maya and the hardware it works on can be programmed to function only when the CEO speaks to it.

Risks and Challenges
Such features will go a long way in making Maya a success.

But there is a need to make these new products user-friendly and intuitive, says Dugar. Users “shouldn’t need a PhD in computer science”. “Today, there is a shift everywhere towards consumerisation of enterprise software. The strong trend is, ‘How do I make my enterprise software as easy as Google or Facebook to use?’ That’s a non-trivial problem, but something Manthan has always kept at the core of its offerings. Case in point is Maya,” he adds.

Another related risk is that a lot of the heavy lifting at the backend could go waste if one doesn’t have the customers using the product.

On the business front, Manthan must also prioritise where it spends its money. A few years ago, Jalan chose to go after the US as his top market, and, as a result, couldn’t fully realise the potential in Europe, which he is now fixing. Clearly, the world is not enough for Jalan to give wings to his entrepreneurial passion.