Innovative products, cheeky marketing and strong macro levers are helping the company emerge as a formidable player in the wire and cable market 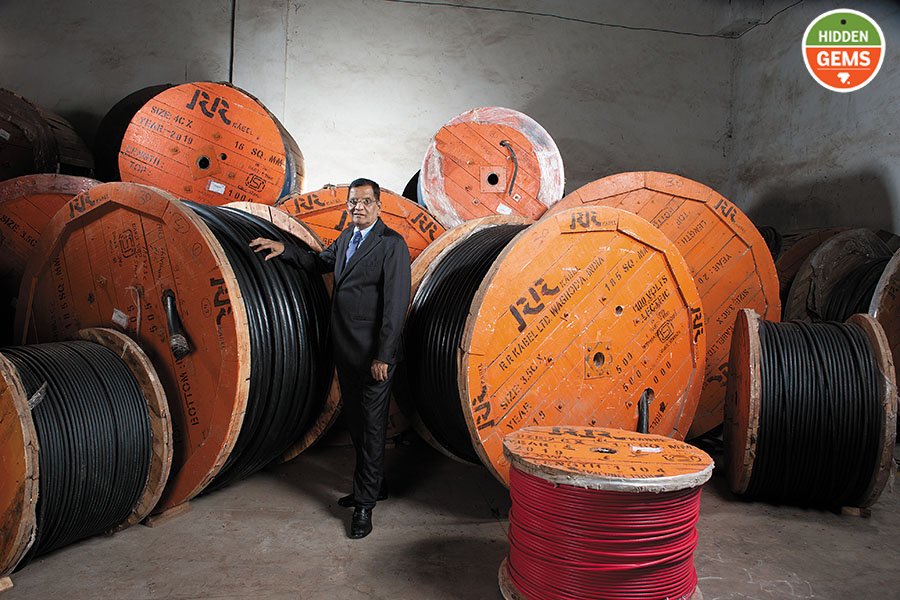 
At one point during the interview, Shreegopal Kabra takes two similar looking wires and lights the ends—one at a time—with a cigarette lighter. As the first wire burns, it emits whitish wisps of smoke and a faint odour. The second one goes up in flames quicker, releases thick tufts of smoke and leaves a burning stench. “You can see the difference for yourself between our wires and our competitors’ products,” says the 61-year-old managing director of wire and cable manufacturer RR Kabel. “That’s why we say, ‘Akalmand bano, sahi chuno [be smart, chose correctly]’,” he says, referring to his company’s brand campaign with actor Akshay Kumar that takes a dig at competing firm Havells, whose tag line reads, ‘Wires that don’t catch fire.’

The reason the first wire didn’t go up in swells of smoke is because RR Kabel uses LSOH or low smoke, zero halogen technology to make them, explains Shreegopal, adding that they were the first to introduce such wires to India—a move that was borne out of necessity. Since the early 80s, the Kabra family had been trading in industrial products and chemicals as the Ram Ratna Group. In the late 90s, a fire broke out in their midtown Mumbai office. “When we learnt that poor electrical wiring had caused the fire, and that top quality wires were not available in the market, we decided to enter the space,” recalls Shreegopal. So RR Kabel was set up in 1999 under the rebranded parent organisation RR Global. Today, the company, which turned ₹2,241 crore and posted profit after tax of ₹95 crore in the last fiscal, is among the top five wire and cable makers in the country and exports to more than 80 countries worldwide.

From the outset—because of the experience we had—quality was our biggest concern,” says Shreegopal. But when RR Kabel started out two decades ago, Indian buyers didn’t care about quality. Most often, they chose the cheapest wires and cables. So the Kabras did things in reverse. “We first established our brand in Europe where quality was understood and appreciated,” says Kirti. To that extent, RR Kabel developed products and facilities—in Silvassa and Waghodia in Gujarat—that met with western quality and safety standards, despite those not being the requirements for the Indian market. Even the name RR Kabel—‘kabel’ means cable in German—was chosen to appeal to Europeans. Today the company claims to be the only one globally to have 29 international accreditations for a single factory.

Even so, for a commodity-like product that goes behind the walls and has low customer involvement, how did RR Kabel manage to create a brand? “Aggressive marketing,” says Shreegopal, succinctly.

Since safety standards have been low in India, points out Shreegopal, spreading awareness about quality wires and cables was a key part of their marketing toolkit. In the initial years, RR Kabel deployed over 100 marketing personnel to penetrate the domestic market. “Coming from a traditional Marwari family, this was a bold thing to do. Everybody told us we are wasting money,” says Shreegopal.

“But we didn’t stop there. Our ad campaigns with Akshay also help educate customers,” he says, referring to the various promotional material they have pushed out with the actor. To further penetrate the market, RR Kabel goes into Tier II and III cities and organises “chai charcha chaupal” (conversations over tea) sessions for local dealers and electricians, the key influencers for prospective buyers.

While marketing spends have increased almost five times over the last few years from about ₹42 crore in FY16 to ₹92 crore last fiscal, the bet has paid off. Today, 23 percent of RR Kabel’s revenue comes from exports and the balance from domestic sales. Sixty percent of the latter comes from institutional buyers for industrial and special projects, and 40 percent from retail customers. The company claims to have a 12 percent share of the organised market in India—around 45 percent still remains unorganised—while market leader Polycab has around 18 percent. Shreegopal is targeting a market share of 15-16 percent share over the next few years.

Fluctuations in copper prices—a key raw material—is a challenge. “It is a commodity business at the end of the day, and margins [10-13 percent is the industry average] do get depressed based on the input prices,” says an industry analyst. However, for Shreegopal it is part of the business. RR Kabel manages its raw material buying and selling patterns over a three-year period, he says. “If you consider that cycle, prices even out.”

The bigger factor at play is the changing market dynamic. “In the building materials industry, customer preferences have changed over the years,” says brand expert N Chandramouli. He cites the paint industry as an example. “People would previously buy unbranded paints and get the job done. Today, the brand you choose matters because it is, in effect, a certificate of quality,” he says. Even when it comes to other building materials like cement or glue, a couple of brands stand out because they represent safety and security, he says.

Adding to this is the government’s push towards infrastructure spending, affordable housing and rural electrification schemes, which increase the demand for power and hence cables. The growing number of nuclear families is another macro driver. “Over the next decade or so, despite the present slowdown in real estate, there will be good demand for wires and cables,” says the analyst.

Last year, RR Kabel expanded into the consumer appliances business with fans, lighting equipment, switches, water heaters and air coolers. While the market is crowded, the Kabras believe that it is a natural extension of their mainstay wires and cables business. Unlike the latter, this is a conspicuous category. Says Kirti, “We have to be visible to be top of mind.”

These new products leverage RR Kabel’s existing network of 1,500 distributors and 30,000 retailers. Through them the Kabras hope to make deeper inroads in the B2C market. “Offering a bundled set of products is an attractive proposition for the customer,” says Puneet Bhatia, co-managing partner and country head (India) for TPG Capital Asia. Last September, the private equity giant reportedly snapped up a 21 percent stake in the company for ₹650 crore.

“With a strong brand connect, excellent distribution and professional management, this family business is set to institutionalise,” says Bhatia. The Kabras are targeting 20 percent growth per annum over the next five years. And just like competitor Polycab’s stellar listing on the Bombay Stock Exchange earlier this year, an IPO may be imminent.