When Sourabh Bansal received an unusually large order of lime from Siporex, a manufacturer of bricks and construction blocks in Pune, he was intrigued. Why would anybody require such a huge order of this building material? Bansal is the non-executive director of Raw Edge, a Surat-based company that supplies chemicals and minerals to industrial manufacturers. While investigating the reason behind Siporex’s large order, he came upon a nascent market: Autoclaved aerated concrete (AAC) building blocks, a stronger and more sustainable alternative to clay bricks.

He started researching the brick market and realised that, barring three or four manufacturers, the vast majority of India uses the labour-intensive method of baking clay bricks in kilns. After steel and cement, bricks are the most consumed building material in India, and make up a Rs 50,000-crore market, which is a largely unorganised.

Bansal started Magicrete in 2008 to manufacture and sell concrete blocks which, he believes, are more effective than clay bricks. The company generated revenues of about Rs 135 crore for FY2014, an increase of 35 percent from the last financial year.

In January 2014, it became the largest producer of AAC blocks in India, claims Bansal. In Mumbai, it has supplied blocks to Sofitel Hotel at the Bandra-Kurla Complex, Indiabulls’ buildings in Lower Parel, among others.

The man behind it
Sourabh Bansal (30) and his father Bimal, who founded Raw Edge, share an entrepreneurial streak. The younger Bansal—an IIT-Kharagpur alum—sensed an opportunity in manufacturing AAC blocks, and wanted to improve efficiency in the construction sector. Bansal’s research showed that AAC blocks were profitable in China. (Prefabricated blocks, an upgrade from AAC, are now used in European Union nations and the US.)

After Rs 20 crore from angel investor Rajesh Poddar, Bansal got the technology to manufacture these blocks from China. And, within a year of getting Siporex’s large order, Magicrete was up and running. 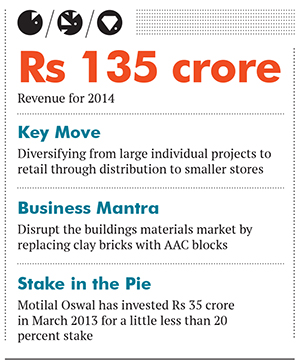 Why It is a Gem
Magicrete was the first in India to change AAC blocks from a niche to a mass market product. Bansal’s client list includes Larsen & Toubro, the Lodha Group and the Shapoorji Pallonji Group. He has bagged contracts for affordable housing projects in Gujarat through the Gujarat Housing Board, as well military quarters across the country.

When compared to clay bricks, AAC blocks have the advantage of lower production cost, time taken for production, ease of transport (they are less bulky and can be carried over longer distances), energy conservation and green technology (it uses fly-ash, a waste product of thermal power plants). These blocks consume 20 percent less energy, and use a fraction of the land and labour required for clay bricks, says Bansal.

Why was it hidden
When Magicrete began in 2008, Siporex, Hyderabad Industries and Biltech (Avantha Group) were the main players in the Rs 50 crore-market. Today, the market size is a little over Rs 500 crore and the company has a 20 percent share of it. However, although the AAC market has grown, it accounts for less than one percent of the brick market in India.

Since Magicrete supplies to the construction industry, its recall value among end consumers is limited.

Aware of the company’s potential for growth, Motilal Oswal invested Rs 35 crore in Magicrete in March 2013. This has helped it broaden its plans: It is now set to go national with production plants in Bangalore, Mumbai and Haryana and outsourcing operations in Kolkata.

Risks and challenges
Even though the company’s revenue grew by 100 percent year-on-year for the first four years, it broke even only in 2011 after it began to utilise its installed capacity that had stagnated at 30 percent in 2009. Underutilisation continues to threaten the business as unrelenting fixed costs eat into margins.

Bansal has also been grappling with the problem of higher input costs such as rising cement prices and the recent rail fare hike.

Further, competition has heated up, especially in Gujarat and Maharashtra. Some of the biggest players in the cement market, UltraTech and JK Lakshmi, have entered the field. Expanding in the building materials industry is capital intensive, and Magicrete will struggle if it has to go head-to-head with established players. It is one of the reasons why Bansal is diversifying into retail. In 2014, a year after this strategy change, 30 percent of the company’s total sales come from the retail market through tie-ups with some 1,300 stores.

Ultimately, though, it is the overall growth in the construction industry that will drive the success of Magicrete.