If all goes as planned, the clothing company best known for its contemporary Indian line, W, will have opened 250 outlets in 40 new cities 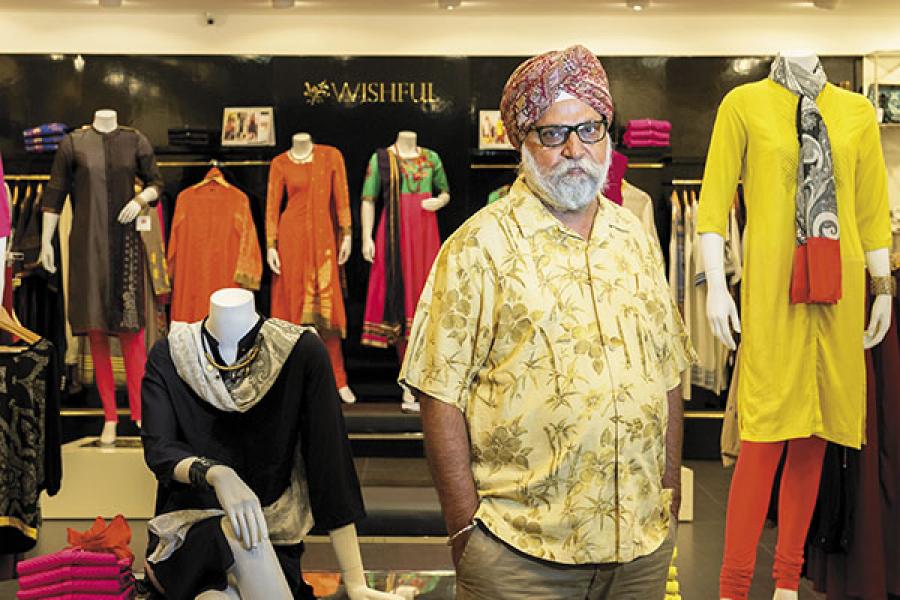 Image: Amit Verma
OS Pasricha, co-founder of TCNS Clothing Company, takes pride in the fit of the clothes designed by his firm

When TCNS Clothing Company launched a women’s ethnic contemporary wear outlet, ‘W’, in September 2002, it opened a sprawling 3,000 sq ft outlet in Lajpat Nagar, New Delhi. “Our first store was built with the idea that women would walk in and make impulsive purchases,” says co-founder Onkar Singh Pasricha. What he didn’t anticipate was potential customers turning away from the store, intimidated by its size. “Women would look at the store from outside, conclude that it was pricey, and walk away without coming in,” he says. 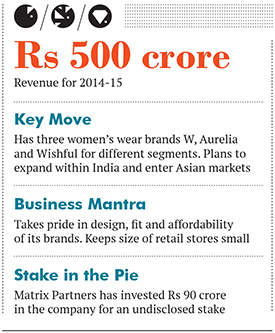 It was an important learning for the company, one of many that has helped TCNS grow its topline to Rs 500 crore of consumer sales (value of goods sold) in FY15. Apart from W, it has two additional lines of women’s wear, Aurelia and Wishful.

Much of this growth has taken place over the last five years. From 30 stores in 2010, TCNS Clothing has grown to 275 outlets in 70 cities across India. Pasricha plans to open an additional 250 stores in 40 new cities by the end of 2015, bringing the total count to 525 outlets across 110 towns and cities.

The person behind it
TCNS is an acronym of Pasricha’s grandfather’s and father’s names, Trilok Chand and Narender Singh, who founded TCNS Ltd, a company that manufactured and exported garments. OS Pasricha and his younger brother Arvinder Singh Pasricha, 63, ran the export business they had inherited, but 15 years ago, they decided to launch TCNS Clothing Company. What changed? “Two developments got us to think inwards,” says OS Pasricha. “First, India opened up its economy irreversibly, and second, we started facing export trade blocks. That’s why we took a strategic decision to enter the domestic market.” His brother, who is on the board of TCNS Clothing Company, also runs TCNS Ltd.

The company caters to women in the 27-35 age group, says Pasricha, who takes pride in the fit of the clothes. “We measured 4,000 women across India and arrived at seven sizes, which fit 96 percent of our customers. Our fit is our strength,” he says. With the ecommerce boom, this investment in understanding silhouettes has held W, which also has an online presence, in good stead.

Why it is a gem
The three TCNS Clothing brands—W, Aurelia and Wishful—have distinct looks. W, with its Indo-Western appeal, contributes to 65 percent of the revenue, while Aurelia, which is entirely ethnic and in the Rs 599 to Rs 3,299 price range, accounts for 25 percent. The remaining 10 percent comes from the more premium Wishful (Rs 2,999-7,999).

TCNS Clothing owes its success to the design, fit and affordability of its outfits. “It created a new contemporary ethnic-wear category,” says Harminder Sahni, founder and managing director of New Delhi-based retail consultancy firm, Wazir Advisors. “The initial struggle it faced was because this was a new concept. But once this category took off, the company was one of the first to gain from it.”

Pasricha will soon be making an international debut with outlets—one each—in Colombo (Sri Lanka) and Mauritius. The other countries on his radar are the UAE and Singapore.

A Rs 60 crore-investment by private equity firm Matrix Partners India in October 2011 gave TCNS Clothing the much-needed funds to scale up its business. Since then, Matrix has invested another Rs 30 crore into the company. “Among businesses betting on fashion, it is the only product design-led company,” says Rishi Navani, managing director, Matrix Partners India. “The Indian ethnic wear market is estimated to be $9 billion, but it is largely unorganised. TCNS Clothing has created a new market of branded ethnic wear by making products that are both cost viable and fashionable,” adds Navani.

Its revenue is growing at a compound annual growth rate (CAGR) of 45 percent. “Our profit has increased by ten times in five years, and our return on capital employed will be in the range of 40-50 percent this financial year,” says Anant Daga, chief executive officer of TCNS Clothing. According to Daga, 98 percent of its stores (both company-owned and franchises) are profitable because they are lean on costs. Most of its outlets see profits within two months, unless they are in malls that are yet to attract huge footfalls. “When we open a store, we do a reverse calculation of how much sales it can do. Some of our stores are as small as 400 sq ft,” says Daga. This is a far cry from the now-defunct 3,000 sq ft outlet.

But while the boutique sizes may have shrunk, the range of clothes has expanded. Over the last five years, the clothing company has widened its range of products to include unstructured trousers, dresses, palazzos, winter wear and accessories such as jewellery and bags. It is currently testing a line on maternity wear as well.

Why it was hidden
TCNS Clothing Company has a relatively low profile simply because it hasn’t devoted time or funds to marketing campaigns. But that is set to change. After eight years of operating in relative silence, it will launch a visible marketing campaign because it believes it has finally achieved the right scale.

Risks and challenges
The biggest challenge in growing fast is losing the ability to question the status quo, says Daga. “We have to keep challenging ourselves and ask ourselves how can we improve and do different things. We should not become stale,” he says. TCNS Clothing cannot afford it, not when it has to contend with popular and more well-known brands like Biba and Anita Dongre’s Global Desi.