When it comes to stories of gritty survival and of courage in the face of adversity, nobody tells them better than Reader’s Digest. However, the one story that the world’s most popular magazine hasn’t told is its own: The magazine’s Indian edition that thrived amid a ban on foreign media and bursts of socialism as well as anti-American sentiment.

If Digest does decide to tell the story, the potential headline could be “I Was Caught in the Socialist Whirlwind” or even “The Unforgettable Kindness of Nehru”.  It will surely cheer up the head office folk at Chappaqua, New York, as they try to wrench the company out of a bankruptcy mess and falling advertising sales. 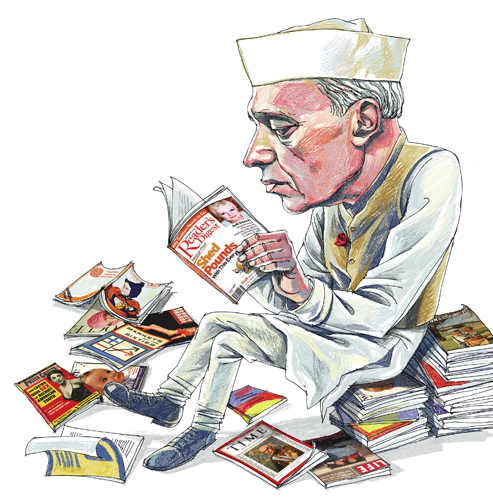 Image: Malay Karmakar
In 1954, nationalist fervor swept across India, fresh from independence but still hurting from colonial memories. It was in this environment that the British arm of RD started printing 40,000 copies priced at Rs. 1.50 each for shipment to India.
However, the government soon banned all foreign media. But Prime Minister Jawaharlal Nehru stepped in and said Digest would be an exception. The magazine would stay on as the only foreign publication in India for the next four decades.
The Digest began local printing in 1963. The next threat arose in 1977 when a socialist regime came to power and started throwing out foreign companies like IBM and Coca-Cola. Yet, the leaders spared Reader’s Digest as it moved to set up a company fully owned by Indians. In the midst of this mayhem, in 1979, the magazine and its four million readers celebrated its silver jubilee in India.
In the January edition of that year, the editors promised to “Indianize” the magazine further and thanked the readers for the “funny and thought-provoking” contributions. “Indians obviously maintain a great sense of humour,” they said.
Insiders at RD never felt the pressure of anti-Americanism, says Mohan Sivanand, the present editor of Reader’s Digest India. “The readership we catered to was never anti-American,” Sivanand says.
As circulation stands at 5.5 lakh today, some critics see this as primarily a marketing success than an editorial one. “They were the earliest players to use direct mailing as a primary source of acquiring new customers and retaining existing customers,” says Mehul Desai, founder of Regency Direct Marketing. The direct mailers were part of the childhood of generations of Indians who grew up along with a growing pile of RD copies in the attic.
For Sivanand, however, the best argument in favour of Reader’s Digest has always been its story-telling. Recently, he was flying from Dubai to Mumbai. A brooding man sat next to him, behaving strangely and rudely and thwarting all communication. When the flight landed, he demanded to disembark first, ahead of business class passengers. Some got irritated and asked him what the matter was.
The passenger said his wife and child had died in an accident and he was going home to claim the bodies — hence the urgency. “That day, I realised I shouldn’t judge anybody,” recalls Sivanand.
The incident became a story in Reader’s Digest India.

Tweets by @forbesindia
A Call to the Faithful
Channel Squeeze