A Call to the Faithful

For Muslims hesitating to invest for the fear of breaking Islamic principles on money, the Kerala government offers a way out

Funds for infrastructure projects, and Shariah-compliant investment opportunities for  Keralite Muslims — with one stroke, the Kerala government has come up with a solution for these two problems.
The state government is in the process of setting up a Rs. 1,000 crore investment company that will offer equipment leasing and home loans, and invest in Islamic compliant ways. This will be India’s first government-controlled Islamic company.

The Kerala government’s decision is intelligent. Of the Rs. 43,288 crore that were remitted into the state in 2008, Rs. 18,998 crore came from non-resident Muslims, says a report by the Thiruvananthapuram-based Centre for Development Studies. This money may not be invested in a way that gets the best returns because Muslims fear that the investment may run foul of Islamic investment principles. 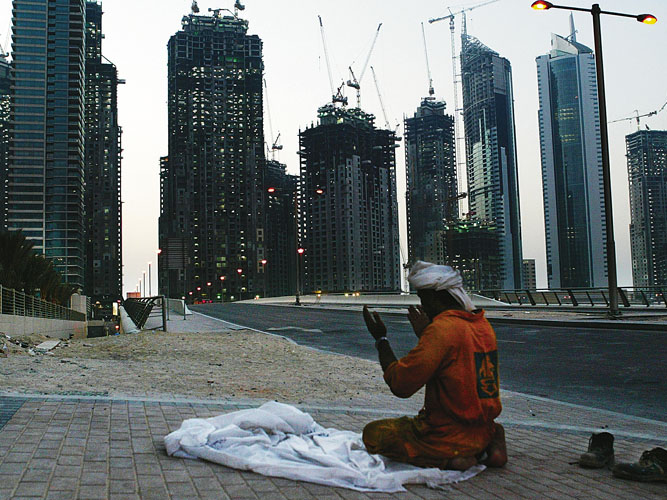 Image: Anwar Mirza/Reuters
Muslims are not allowed to invest in pork, alcohol or gaming companies.
The Shariah, which stipulates dos and don’ts for observant Muslims, prohibits earning or living off interest. Muslims are not allowed to invest in pork, alcohol or gaming companies. They are not allowed to invest in banks and other companies whose debt is more than a third of their market capitalisation and receivables are less than 5 percent. Most non-resident Keralite Muslims therefore let their money generate sub-optimal returns.
Shariq Nisar, director at Mumbai-based Shariah investment consulting firm, Taqwaa Advisory and Shariah Investment Solutions, says, “A survey found the Malayalee Muslims use their remittances to buy jewelry, real estate or open bank accounts offering no interest. Now the government wants to use it for infrastructure development and to give better returns to these non-resident Keralites.” Nisar’s firm is advising the Kerala government on setting up the Islamic investment company.
The company will ensure that investors’ funds are deployed in Shariah-compliant ways. So, initially it will provide finance for cranes, trucks, wagons or other equipment to infrastructure companies, through a lease-to-own system known as Ijara. Here, the company would buy the capital equipment and the user would pay an instalment that consists of rental for use and part-payment.
The Kerala government’s step is significant. While some small companies have provided some Islamic products, the first government-backed company could provide much needed stimulus to the floundering Islamic investment sector in India. Islamic Funds in Saudi Arabia and Malaysia, two major markets for such investing, have more than $23.86 billion under management, according to a report by  professional services company, Ernst and Young.
The report lists India as one of the countries with high potential because of its large Muslim population and large untapped market thanks to a lack of Islamic financial products including bonds, insurance or mutual funds.
“This allergy the central government had [to religion-specific financial products], meant that Shariah-compliant investments from the Middle East and South East Asia went to European or US companies rather than here,” says Syed Beary, whose construction company has Shariah-compliant funding for his 1.2 million square foot office development project near Bangalore.
Hasib Ahmed, principal investment officer, who manages Asian Development Bank’s Islamic Investment Fund among others, says, “Just because India does not have a banking law for Islamic banking, does not mean that it would be losing out on remittance inflows, as these funds go to support families living at home and are absolutely essential. However, Islamic investment flows might and possibly do not come to India as banking laws do not provide Islamic structures for investments.”
Will Muslims from Kerala invest? Kerala’s industries minister, Elemaram Kareem says, “We want to honour Malayalee Muslims. They invest in Europe or with small religious groups here. Why not us?”
While there are few precedents for this in India, elsewhere for Ijara and Murabaha (home loans where the financing company buys the property, adds a mark-up, and sells it to the user on instalment), the rental or mark-up (rate of return) is often linked to the interest rate in the market. In India, the expected return should be around 9 to 12 percent, Nisar says. Foreign investors who had made Shariah-compliant equity investments, are likely to get returns of around 20 percent, he says. Beary, whose office development project is built with Shariah-compliant funding, says returns could be between 20 and 25 percent.
“Right now we are looking at an NBFC [non banking financial company]. When regulations change we will look at creating an Islamic Bank,” Kareem says. If this happens, it could be India’s first Islamic Bank.
It could go a long way in attracting Islamic investments from non-resident Keralite Muslims. Already, these prefer investing in India’s nationalised banks to banks in the Middle East, some of which went down during the global economic meltdown, says Irudaya Rajan, writer of the study on remittances to Kerala.
The Kerala government says its company, in which it holds 11 percent equity while the rest is held by non-resident Keralite investors, will work to change regulations at a local and national level to allow growth. “The state government’s involvement will bring a comfort level to the central government,” Beary says.
All things considered, answers to some vexing regulatory questions would have to be found before the company can scale up. For instance Murabaha has been hard to introduce in India because it would mean an added cost of getting registration and stamp duty done twice, Nisar says. But it is an area where the state government could amend regulation to allow this.
Making projects Shariah-compliant on a sustained basis is a challenge too. ADB’s Ahmed says he once invested Shariah-compliant money into buying aircraft but the airline had to ensure that alcohol would not be served on it.
To address this, the Kerala government will form a board of Shariah experts to review investments on a quarterly basis. “There is a huge opportunity of channelling Middle Eastern money for such investments,” says Luis Miranda, chief executive of IDFC Private Equity.
The regulatory dimension and difficulty in implementing this, makes involvement of the government, though unusual, a logical decision. “Since this is a first of a kind, we want to assure investors of government involvement and support,” says T. Balakrishnan, principal secretary, Kerala State Industrial Development Corporation, through which the state government is investing in the company. “But it will be professionally run.” ADB’s Ahmed says India’s banking acts will have to be amended as investors would like protection for such investments in the law.

Ijarah
A finance company buys an asset and leases it out to users for a fee. The asset must be used by Shariah compliant companies and both parties should know what it is being used for.

Musharaka
A finance company and the customer buy an asset in joint ownership. The periodical payment from the customer goes towards increasing his equity in the asset until he gains complete ownership. The company makes money from the profits as long is it owns part of the asset.Murabha
A finance company buys an asset and sells it to a user at a profit. The ownership is transferred to the user who pays back the amount in installments. The rate of return is fixed in advance and is for the time value of the money.Takaful
Takaful is a communal insurance where liabilities are shared by the community.

Tweets by @forbesindia
Is India running out of Water?
Life's Like That