When the Soviet tanker Uzhgorod, carrying 11,000 tonnes of diesel, sailed into Mumbai harbour in August 1960, it was a defining moment for India — one that foreshadowed the country’s geo-political leanings for the next few decades.

Western oil companies Shell, Caltex and Esso controlled India’s oil refining, imports (both on the east and west coasts) and retailing since the turn of the century. The Uzhgorod’s entry marked the end of their time. The companies slowly reduced supplies after pricing disputes. They also insisted on being paid in dollars — a tall order when foreign exchange was scarce. When the Soviets offered a three-year, rupee-based deal, the multinationals (MNCs) refused to handle the ‘red kerosene’.
Fledgling national oil company, Indian Oil Company (IOC), stepped in to unload the fuel into Army-owned oil-tanks at Antop Hill, Mumbai. In coming decades, the company would take charge of fuelling the growing economy, to ensure that India was never again at the mercy of the MNCs.

The era was defined by extensive support by the US and British governments to push their oil interests in various corners of the world. The CIA and MI6 often intervened politically to protect MNCs. They were behind the coup in Iran to unseat Prime Minister Mohammed Mossaddeq, because he nationalised the Anglo-Iranian Oil Company (which later became British Petroleum).

But India’s first prime minister, Jawaharlal Nehru, was clear about the need for self-sufficiency. IOC and the Oil and Natural Gas Commission (ONGC) were formed in the 1950s with a mandate to achieve energy independence.

Early help for the energy industry came from East Europe. IOC built its first refinery at Noonmati near Guwahati, with Romanian help. The project was imported lock, stock and barrel from Romania down to the last bar of steel. Old refinery hands recall the rooftops were designed to prevent ice from forming, a phenomenon unlikely to occur in Assam. 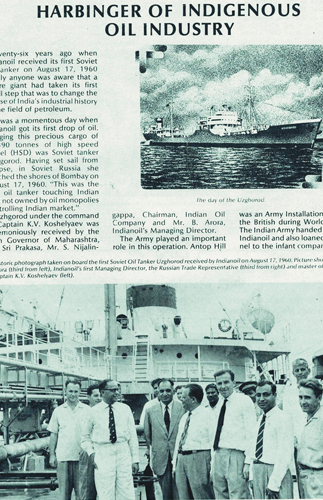 FIRST STEP: Indian Oil officials on board Soviet tanker Uzhgorod that sailed into Mumbai on August 17,1960 with 11,000 tonnes of Diesel
Over the years, Indian Oil became a nursery for management talent for the Indian oil and gas industry. This was because of the management’s foresight during the initial years when it groomed managers for board-level positions. IOC managers rose to lead ONGC (Subir Raha), Gas Authority of India (Prashanto Banerjee) and Reliance Industries (P. Raghavendran). Others like Sumantra Ghoshal went on to become academic and management gurus. The navratna developed a unique culture, with succession planning being a key part.
Indian Oil Company Ltd. was renamed Indian Oil Corporation in 1964 following the merger of Indian Refineries with it. IOC has since grown into the country’s largest commercial enterprise and 18th largest oil company in the world.
It lost steam in the 1990s, when uncertainty set in with government plans to restructure the industry by breaking up IOC into smaller companies. Problems were compounded by challenges from private oil companies like Reliance. IOC however, grew in this period, by buying out the Kolkata-based oil marketer, IBP. They also made international forays through a retailing venture in Sri Lanka (Lanka-IOC).
Today, the country’s largest Fortune 500 company accounts for nearly half of India’s petroleum consumption and the group owns and operates 10 of India’s 20 refineries.

Tweets by @forbesindia
Henry Mintzberg's Leadership Formulas
Do Happiness and Billions Go Together?