Do Happiness and Billions Go Together?

Should we include happiness in how we measure the economy?

Counting Error
Let’s face it. Gross Domestic Product (GDP) is the most accepted measure of national economies, but hardly an accurate one. It leaves out so many variables that it shows many countries to be richer or poorer than they really are. GDP ignores the depreciation of capital, be it disappearing forests or ageing labourers, says Romina Boarini, an economist at the Organisation for Economic Co-operation and Development (OECD). And GDP nonsensically goes up after a natural catastrophe. When an epidemic spreads and people spend on medicine, it goes up again.

Bhutan shows the way
At least one country has known the value of happiness all along. Bhutan has been measuring its Gross Happiness Product as its standard of living since 1972. It seems to have worked somewhat. Bhutan was ranked the happiest country in Asia and the eighth-happiest in the world by a University of Leicester survey in 2006. Bhutan has a Gross National Happiness Commission and in 2008, the government found that 68 percent of Bhutanese classed themselves as being happy. Its first democratic elections were held last year. Yet the Bhutanese economy remains one of the least developed. You decide. 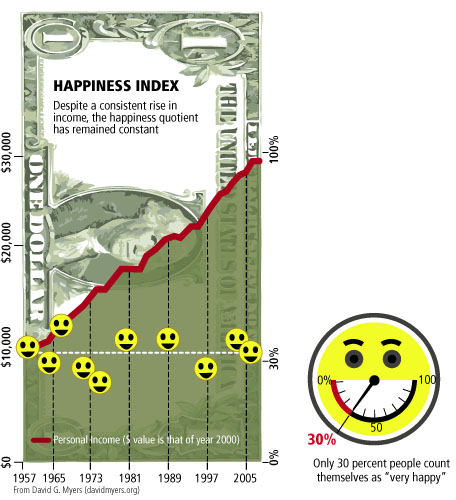 Image: Hemal Seth
Bhutan has been measuring its Gross Happiness Product as its standard of living since 1972. It seems to have worked somewhat
Measuring Smiles
Will happiness work as an indicator of economies larger than Bhutan’s? French President Nicholas Sarkozy thinks so. He even set up the International Commission on the Measurement of Economic Performance and Social Progress and asked economist Joseph Stiglitz to chair it. A report by the commission, authored by Stiglitz and Jean-Paul Fitoussi, says the inclusion of happiness and other factors of well-being would cut the per capita GDP gap between the US and France by
at least half. Currently, US’ per capita GDP is 14 percent higher than France’s, according to Financial Times.
Subjective Indicators
The problem with GDP is its objectivity, says Ed Diener, professor at University of Illinois. He says subjective indicators tell the story much better. For example, people who are happy with their jobs are likely to stay in these jobs, boosting the economy. Sarkozy’s commission found that GDP may be a good indicator of the level of the financial economy, but could hardly fathom the depths of the social economy. Stiglitz says, “The loss of a job has a greater impact than can be accounted for just by the loss of income.”
The value of money
More money doesn’t always bring happiness. A study cited by the Sustainable Scale Project in the US during 1957-2002 showed that as incomes kept rising, happiness levels increased up to a certain level and reached a plateau at some point. David Myers, professor of psychology at Hope College, Michigan, says, “Once people have enough money to feel secure, more money appears to yield diminishing returns.” This is seen in our daily lives too. “If I’m three times richer than my grandfather, and my car goes 65 mph faster, am I happier? It’s not a sensible measure,” Andrew Oswald, a member of Sarkozy’s commission, says.
Happiness is imperfect too
The problem with happiness is it is not easily quantifiable. Diener insists measures of happiness can be incomplete because it has both both broad and narrow connotations. It cannot accurately convey what should be assessed when guiding policy decisions. For countries like India, the need for measuring financial success will not go away for a long time. Oswald explains, “For developed nations, we need to move toward a focus on mental health. [But] countries where there is not enough to eat have different problems. For now, they still do need to measure the growth of their economy [through GDP].”

Tweets by @forbesindia
Xtra Premium: IndianOil Was the Nation's Premier Petroleum Find
Will Single Make a Comeback For Music Fans in India?