How we survived: Zypping through a pandemic 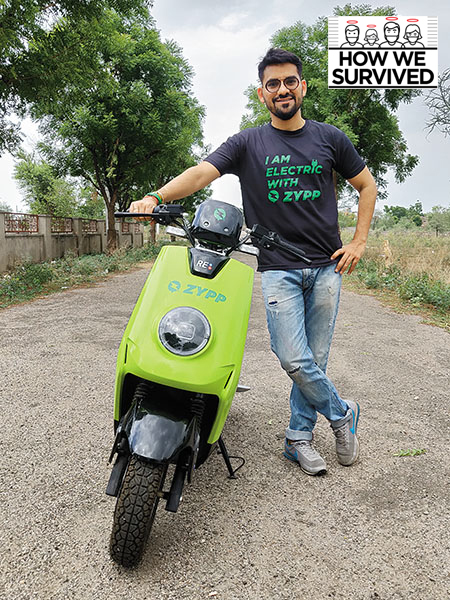 Akash Gupta. co-founder of Zypp, says the company plans to expand to 50 cities in over two years

'How We Survived' is a series of stories on businesses—big and small—that innovated or pivoted during the coronavirus crisis to survive. For all the stories in this series, click here It was perhaps the smartest move to make on April Fools’ Day. Akash Gupta didn’t even think twice in making the switch. Last December, the co-founder of Zypp—an electric bike rental service to individuals and corporates—had taken baby steps in exploring a different business model. “I just wanted to pilot and see if it works,” recalls Gupta, alluding to hiring two full-time drivers to start a delivery service for an ecommerce player. For Zypp, which had spent a good three years—resources, energy and time—with Plan A, it was not easy to take tentative steps in moving to Plan B. The hesitation was understandable. Gupta was never comfortable with the idea of having riders on his rolls.

The baby steps turned out to be a giant leap in confidence for Gupta, who added three more riders the following month. “Every time the vehicle was running, we were making money,” he recounts. Buoyed, Gupta took the tally of riders to 15 by the end of March. It seemed he had found his spark. All that was needed now was a fire.

The pandemic, lockdowns and zero business for over a week till April 1 was the fire that gutted the old business model. Gupta quickly adapted to the ‘new normal’. He shifted to delivery with his fleet of riders, and added three business layers. First, delivery for ecommerce players and setting up charging stations for them. Second was offline-to-online vertical, where small and big brick-and mortar stores—from kiranas to chemist shops to single-brand chains—were added. And third was on-demand vertical for restaurants and bakeries, who could use the riders whenever they got orders. “Within 45 minutes we started doing express deliveries for them,” Gupta recalls.

Nine months into the pivot, the gambit seemed to be moving at an express pace. From being present in one city with 15 riders doing 15,000 deliveries for five B2B clients in April, Zypp has expanded to six cities in December, is doing two lakh deliveries for over 250 B2B clients with 50 riders. Zypp has built 50 battery swapping stations in Delhi-NCR, and plans to take it to 500 over the next three years. “This crazy growth has come after the pivot,” says Gupta.

Though the switch to delivery was seamless, execution was the crazy part for Gupta. Getting a right set of riders, and fixing the app to meet the requirements of the new world of delivery posed huge challenges. “Another big ask was to ensure discipline in delivery,” he says. “Timing, and being on-time, was tough to manage.” 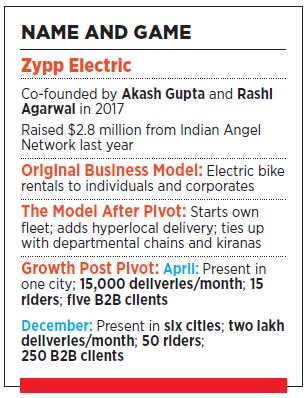 On the client side, the problem was ‘right’ utilisation of the riders. Gupta created a dashboard and dug deep into data to offer solutions. Take, for instance, a single-brand retail chain that has 25 riders working for deliveries. “We would find out who is the most profitable rider for them,” says Gupta. From the number of deliveries per store, deliveries per rider, idle time of the rider, kilometres travelled, weight carried to numbers of hours logged in, Gupta fleshed out every granular detail to give his clients customised offerings. Analytics was also used to see how the driving pattern—whether he was a rash driver—of a rider. “These things helped in better data and journey for us,” he says.

Investors, for their part, are betting big on the ‘eco friendly’ journey of Zypp. When the Indian Angel Network (IAN) Fund invested in Zypp last November, recalls Padmaja Ruparel, co-founder of IAN, the strategy for the company was to build a B2B business. The founder steered the company into last-mile deliveries with electric vehicles (EV). “Zypp’s mission of reducing carbon footprint in every delivery aligns with the IAN Fund’s focus on ESG (environmental, social and corporate governance) as well,” she says. Zypp, she lets on, has forged quick partnerships during the pandemic. “The company is now on a fast growth trajectory.”

For Gupta, who has had stints with Airtel, Dell, Infosys, Snapdeal and Mobikwik, the entrepreneurial journey has been gradual. He started in 2017 with Mobycy, a cycle-rental platform. The idea was to solve the last-mile commute by tackling pollution. Travelling under five kilometres, Gupta contends on the basis of a study, makes up 50 percent of all personal mobility in India. Cycles, he thought, was the best way to solve the problem. After six months, Gupta rolled out the first electric two-wheeler for rent. It was named Zypp. The name of the company too was changed from Mobycy to Zypp.

Change in name, though, didn’t change the fortunes. Reason: People didn’t know how to use batteries, the scooters were low-end, and the first batch of 50 scooters was owned by Zypp, which was a drag on the finances. “Financing for electric two-wheelers was almost non-existent,” he rues. Gupta devised an ingenious programme to change the asset-heavy model to asset light. Early this year, he posted a message on social media, inviting people to turn entrepreneurs by investing in e-scooters and earning `2,000 per month. “It was a wild shot,” he recalls. “But it worked.” Over 50 HNIs bought 200 scooters in two months. “This gave us confidence that EVs can work,” he says. Another smart move to tackle the issue of driver attrition was hiring women riders. Ten percent of the riders are women, and Gupta plans to add more to the gang. “We have zoomed,” he says.

Zypp plans to expand to 50 cities in over two years. The target, contends Gupta, is not at all ambitious. Ecommerce players deliver across the country, over 500 cities, he says. Gupta knows about the flip side of over-exuberance. “We are cautious. But we won’t be timid.”