How we survived: Betting big on buses

As trains came to a halt during the lockdown, IntrCity RailYatri's bus business, with an emphasis on quality and service, has driven growth and a rebound 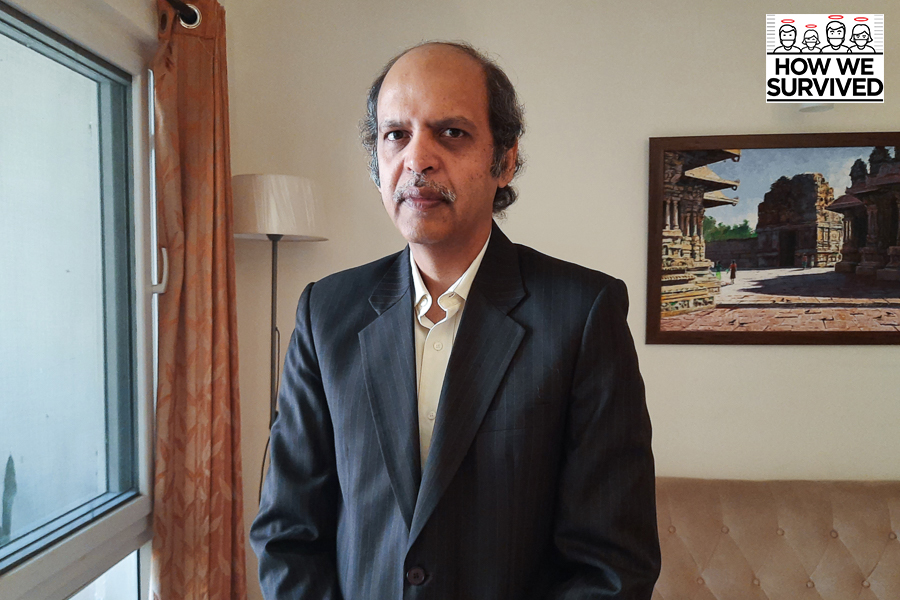 'How We Survived' is a series of stories on businesses—big and small—that innovated or pivoted during the coronavirus crisis to survive. For all the stories in this series, click here April 2016. Nandan Nilekani boarded the train. The co-founder of Infosys and former chairman of UIDAI (Unique Identification Authority of India) decided to back RailYatri, a startup providing analytics-based real-time rail travel information—ticket availability, delays, possibility of ticket confirmation for waitlisted passengers—to users. Nilekani had identified a unique venture—already backed by a bunch of big VCs such as Helion Ventures, Omidyar Networks and Blume Ventures—which had recently rolled out the option of pre-booking meals for commuters. “This is a new-age product made by Indians for Indians,” Nilekani reportedly said. The prospects looked exciting.

April 2019. Three years later, the train comes to a screeching halt. The Delhi High Court reportedly declares the business and operation of RailYatri as unauthorised. In a complaint filed in 2017, Indian Railway Catering and Tourist Corporation (IRCTC) alleged that RailYatri was providing illegal bookings and meals on trains. The verdict in the case, which dragged on for over two years, came at a terrible time. RailYatri had doubled its business: Revenues jumped from Rs 5.5 crore in 2017-18 to Rs 12.2 crore in 2018-19. Ironically, the startup, which specialised in making analytics-based predictions, failed to predict the mishap. The prospects looked bleak. 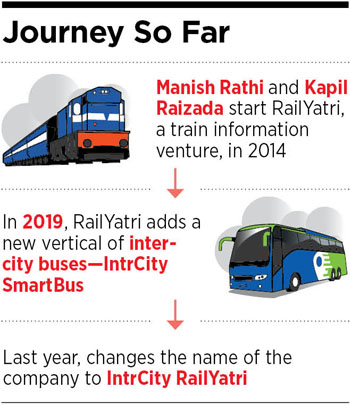 Fast forward to December 2020. “The litigation made us realise that we had put all eggs in one basket,” recounts Kapil Raizada, co-founder of IntrCity RailYatri. The learning was profound. Raizada and his team hunted for another basket. A month after the verdict, RailYatri rolled out IntrCity SmartBus, a fleet of inter-city bus services. The name of the company was changed to IntrCity RailYatri, reflecting the new reality and identity. In February last year, IntrCity raised funding of over Rs 100 crore, led by Nilekani and other investors such as Samsung Venture Investment, Omidyar Network and Blume Ventures. Buses were primed to drive the growth. And they did. For the March-ended fiscal 2019-20, revenues jumped to Rs 51.5 crore. The bus vertical, interestingly, contributed 75 percent to the revenues. “We had pressed on the accelerator,” he says.

At the peak of acceleration, though, the venture hit the Covid wall. Nine months into the pandemic, though acceleration is missing, buses and business are back on the road. “Buses have been driving the growth, and the rebound,” says Raizada. With train services shut down completely during the initial months of the lockdown—and still not fully operational—buses have helped in staging a comeback. The lesson of 2019—not putting eggs in one basket—came in handy for Raizada as he and his team have coped and survived the torrid months post the lockdown. 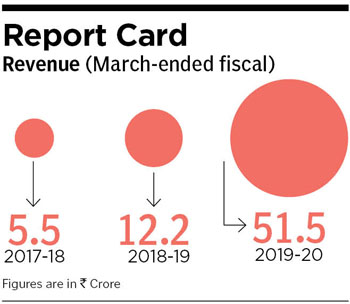 For any startup, the biggest survival hack would be to brutally cut expenses. “In our case, the biggest operational cost was running buses,” recounts Raizada. With buses not running at full steam during the first few months, there was nothing to worry about in terms of bleeding operationally. What was ‘slaughtered’ next was advertising and marketing spend. “They too came down drastically,” he says. Other variable costs were also pruned. What also came in handy was a funding round of Rs 100 crore that happened in February, a month before the lockdown last year. It helped immensely. “The fact that we had a fair bit of corpus with us gave us the confidence to survive,” he says.

What, though, was needed most to survive was strict discipline and loads of patience. “We always had these qualities in-built in our DNA,” claims Raizada, who failed to anticipate the severity of the Covid impact. “I got a heads-up from my investors early last year that a storm might be coming our way,” he recalls. Disbelief was the first reaction. Denial followed it. The gritty entrepreneur was taken off guard. Towards mid-April, things turned messy. There was no end to the lockdown in sight. “We went back to the drawing board and made a contingency plan,” he recalls. A crucial element, he lets on, was to reboot the system. “Covid gave us time. It was an opportunity,” he says. The fleet management system was upgraded; analytics, pricing algorithms and agent network automation was also looked into; and an exhaustive consumer survey was undertaken to understand the needs of travellers in the ‘new normal.’ The concerns were just one: Safety. 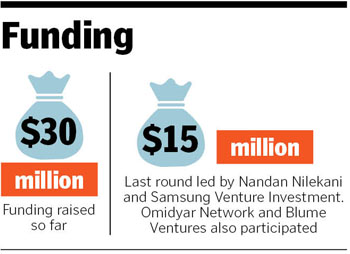 Raizada egged his team to deliver the best. From using sanitisers, thermal scanners, verification of travellers and replacing blankets on the buses, to training staff and partner operators in cleaning, steps were taken to allay all apprehensions. The effort did result in a slight increase in the cost of travel. But here’s the silver lining of the pandemic: Commuters didn’t mind paying the extra bucks. There has been a change in the mindset as well: Quality, which was looked upon as a luxury, became a necessity. “It would have taken us millions of dollars and years to change the consumer habit. The pandemic made it happen for free,” he says. Quality, he lets on, is now in the driver’s seat.

Back in 2016, there was another ‘quality’ issue that Raizada was grappling with: Failed travel. Thousands of users were finding it hard to get confirmed train tickets. Interestingly, the failed travel was most between cities which could easily be covered by road. The huge waitlisted passenger list turned out to be a blessing in disguise. Raizada offered the option to commuters to switch to bus. There was one glitch, though. Passengers didn’t switch. The reasons were plenty. First, there was a lack of definitive boarding points for buses. Secondly, buses were not perceived to be safe. Thirdly, the experience while travelling inter-city was also nothing great to write about. There was nobody to ensure discipline among unruly commuters. And there were many. Lastly, buses didn’t have toilets. For overnight travel, it was a pain. 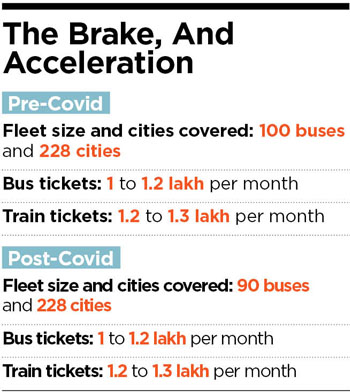 Three years later, in 2019, when RailYatri rolled out its fleet of buses, all these pain points were addressed. Bus lounges were rolled out; a bus steward was stationed inside buses to maintain discipline; toilets were introduced; on-time tracking devices and CCTVs were installed. “The buses were made smart,” says Raizada. The move paid off. IntrCity RailYatri now covers 228 cities; has over 90 buses on its platform; and books 1-1.2 lakh bus tickets every month.

Investors are impressed with the performance. IntrCity SmartBus, reckons Siddharth NautiyalI, investor director at Omidyar Networks, was an outcome of deep domain insights from its founders who had already invested several years in the Indian mobility domain. The biggest reason behind IntrCity’s growth, he explains, has been that the company understood the pain points of travellers and was able to craft a mobility product offering that directly addressed those pain points. Omidyar Networks, the VC underlines, invested in IntrCity to address the issues around standardisation, safety, convenience and on-time intercity travel built with the lower and lower middle-income consumer in mind. “IntrCity’s technology-first approach backed by strong consumer insights has helped them grow over 10X over the last two years,” claims NautiyalI.

Post-pandemic, too, IntrCity is best suited to make the most of the revival in travel demand. “We are already seeing stronger-than-expected recovery of inter-city mobility amongst lower and lower middle class Indians,” says NautiyalI. Train and bus travel, he lets on, will recover much faster than air travel, and there is already evidence emerging to validate this belief. Another strong trend that has emerged is a clear shift in travellers’ awareness and preference towards hygiene, cleanliness and social distancing during travel. “This is helping the professionally-run mobility brands to scale faster than the industry,” he says. IntrCity, he underlines, is well placed to lead a transformation in inter-city travel in India.

Raizada, on his part, too bets big on the future of organised and branded bus services in India. “In five years, the Indian bus industry should be at par with international standards,” he says. While the industry so far has not received adequate attention, technology and funding, the script will change over the next few years. “India still needs one national brand which one can trust and board anytime and anywhere,” he says. For IntrCity RailYatri, though the train might keep chugging, the bus will keep driving the growth and business.