The power to fix their problems lies in the hands of slum dwellers themselves. They need not look to the government or anyone else 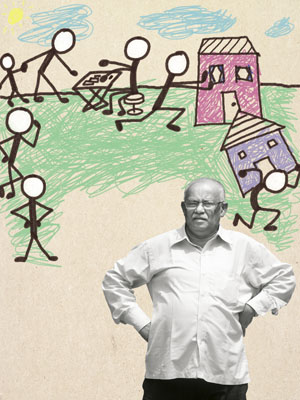 Nobody understands the plight of the hapless slum dweller more than Jockin Arputham, 63. Arputham was born in Kolar, Karnataka of Tamilian parents. He did not complete high school and moved to Mumbai when he was eighteen. He fought for the cause of fellow slum dwellers who were facing eviction. In 1969, he formed the Bombay Slum Dwellers Federation, which he expanded in 1974 to make it the National Slum Dwellers Federation (NSDF).

In 1985, Arputham linked his federation with the Society for the Promotion of Area Resource Centers (SPARC). In 2000, he won the Ramon Magsaysay award for his work in the area of community building and helping the urban poor.

Today, the biggest challenge is shelter, in which the United Nations (UN) has failed. I think the major issue for the world is this. Latin America, Africa, etc have a need for shelter; and in India the issue is very big because we are a big country with a large population. But all over the world, all the political leaders have failed; maybe because it is not in their control. I myself lived on a pavement after migrating to Bombay. It was a big shock to me.

It is also a fact that 70 percent people here do not have access to a toilet. And a toilet does not require a huge budget. My other concern is, can we try to see how open-defecation-
free the country can be? My organisations, National Slum Dwellers Federation and Slum Dwellers International, built $500 million worth of toilets. The next important issue is shelter. I am working with the poorest of poor. In my concept I accept slum as an option.

Therefore, I developed a mechanism as I started working in India. I started working in my slum, then in the neighbouring slum, then I worked in the city, and now internationally. Then we formed Slum Dwellers International and now we work in 38 countries and there are a lot of countries in the pipeline. Very simply, it is about not putting the onus on the government or anybody else, but putting the onus on the people. You have to do it, and you have to feel you can do it, only then is it possible. You cannot continuously expect that somebody else will do everything for you. That is my concept. And it is happening.

We found a solution by organising the community. They take the responsibility, they go to the government or whatever agency and say to them, “we have an idea for change. We would like to build.”
When we go to a settlement, we start working with women. We do a survey of the settlement starting with the hut count, the area’s boundary, the age of the slum. We ask when did you come, how did you come, who is the landowner, what are the facilities you have, do you have drainage, water — and many other questions like that. Then we call for a meeting.

In Mumbai, there are 150 settlements with no toilets. We tell them, write a letter to the corporator and go and demand action. Go and meet the corporator, ask him to come with us, go with him to the municipality and ask them for a toilet. Go and demand from the government. Create a demand driven system.
When no contractor comes forward, we prepare the group, and we say, as an employment, why don’t you do it yourself? Then our communities take over construction. Ninety percent of our projects are made by the community. No regular contractors are willing to come and work in the slum. They feel they will make very little money on this. So then, we organise the community and we say who are the best managers of this toilet in the community.

In the last 15 years, all the profit-making toilets are made by Sulabh and all the community toilets are made by us. Seventy percent are made by women participants who act as contractors or designers, etc. When the municipality gives the tender, nobody else applies for it; and even if they apply, they have a high charge. These people have experience with building as individuals. In the whole city, who is the mason for buildings? The slum dweller. Who is the plumber? The slum dweller. But they work as individuals. In our effort, we club them together. Now we are in many states including Orissa, Andhra Pradesh, Karnataka and Gujarat. Among other countries we are in Kenya, Uganda, South Africa, everywhere. For the housing projects also we have a similar model.

See, we have a simple model. Anywhere I see a mason’s house that has been built by an outside mason, I feel ashamed. In my organisation, we organise them. We have good quality control and keep costs low. This also gives them a sense of ownership. Then you are not on the receiving end; you are a change agent in society. So it is not changed by the top, it is changed by the bottom.

For housing projects there is a lot of corruption, red-tapism etc. So we say, let the community step forward. Government authorities realise now, that if they leave it to the community, there is less headache. Often, the government wants us to do it now because it is people-oriented and it is more sustainable.

Policymakers talk about solving the problem of 10 million people, two million people, 200 million, 10,000 million. The UN had given a call that by 2010 they would address 100 million. They have not even done one million. This cannot be addressed unless people get involved. People have the information and they make a lot of choice about where to go and how to live safely.

Now we are building 500,000 houses in Namibia, which is how much they need. When you compare, India is huge. I think this cross-country experience helps us to find the issue and solve it. We made a package here — where the money can come, what kind of tenure, what kind of house? It involves the community in large numbers. It gives confidence to the people that the solution is not with the government, it is with you. You want to live on the road? You want to have a shelter? You decide. The government has to facilitate the change.

So much time has passed and the UN has missed all its goals. They are not even able to identify the problem. The problem of accepting who the actors are, that can deliver and how this shelter for all or affordable housing can be delivered. The whole concept that we are trying to develop — where I am involved is — how to involve the community and let the community take responsibility and decide this is the way I want to live, this is the size of house I want. If you leave it to the planner, policy maker, architect they will take everything and make it into pieces or write so many thesis. Then the issue is not addressed.

We got money through Melinda Gates Foundation and Cities Alliance among others, to work on this in Africa. We got $4 million to work in Uganda. How to eradicate this in the whole country? Now they are asking us to take one more country, that is Ghana, and then there is a meeting to decide two more countries.

My concern is housing, security of tenure and eliminating defecation in the open. This will give them dignity. This is an issue for women. Men can walk one or two kilometres and find a toilet but women cannot.

Show me any document prior to 1995 where a government talks about this issue. Now they are forced to do that. If governments don’t do something by 2020 people will not allow it.

Tweets by @forbesindia
Padmasree Warrior: The Next Internet
Thomas Davenport: Disengage From the Information Stream