India in the 1980s: The lull that shaped the storm

It was the decade that saw irrevocable changes in the banking system, as well as the founding of some of India's biggest companies 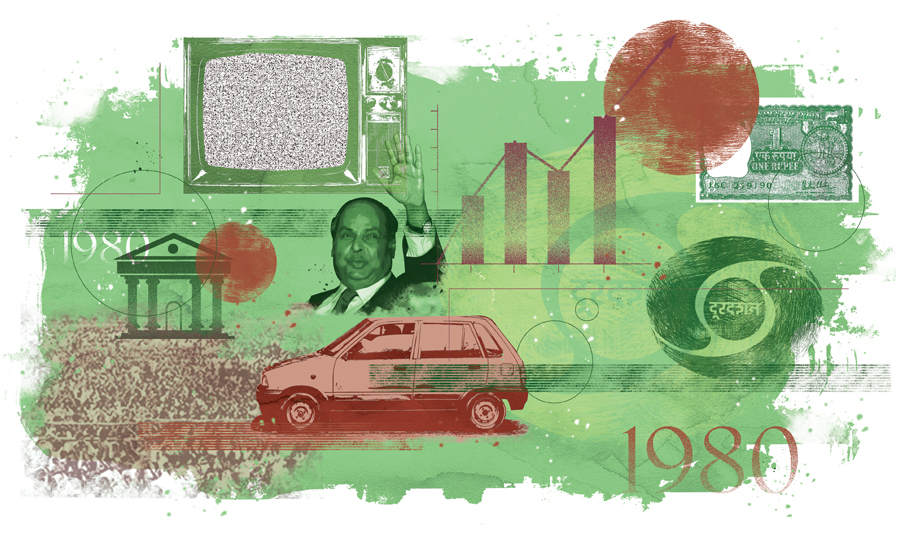 The 73 years after India got its independence can be broadly sliced into three phases: The three decades post-1947 till the 70s was when Jawaharlal Nehru and, then, his daughter Indira Gandhi went about the task of institution and nation-building. The 80s was arguably a lost decade, with Indira pursuing her gambits of nationalising banks and loan melas when she should have been ushering economic reform and deregulation. That eventually came in the 90s when the country’s coffers had dried up. The last three decades have transformed India, made a fraction of Indians richer, but poverty and inequality are still fetters in the eighth decade after India became a free country. Forbes India dives deep into these three phases of freedom Few people realise how dramatically the 1980s transformed India. It was accidental, true. But the change was cataclysmic, with tremors shaking the very foundations of India’s banking system and the entire economy.

To understand this, one must bear in mind a famous saying of communication guru Marshall McLuhan, that when you change just the medium of communication—not even the message—you could change the way people think. You change societies. And sometimes you change governments. What changed India was the adoption of a new medium, a new yardstick in politics, and a shameless recourse to public money. But more on this a bit later.

Go back into history. When India got its independence, the growth rate of India’s population and its economy were almost the same. By the 1950s, GDP growth swelled to 3 percent while population remained at 2.5 percent. The low GDP growth even made the famous economist PR Bramhananda remark that India suffered from a Hindu rate of growth.

By the 1970s, the GDP growth remained more or less at the same level, though it did climb to 3.5 percent in some years.

But in the 1980s, this growth rate catapulted to 5.6 percent; go to the BSE Sensex and watch it soar during this decade. Ditto with the Index of Industrial Production. Something was happening, though few knew what or how, at least initially.

And then the penny dropped. It was Indira Gandhi’s policy of placing a television set in the centre of each village, so that the entire country could see her face and hear her message. She talked about her dreams for India and how the Opposition was out to thwart these plans. Any opposition to her was unpatriotic and anti-national. And how her sweat and blood would go towards the transformation of this country. At that time there was just one channel—Doordarshan. So when a message went out on television, it was almost certain that everyone would watch her face and hear her message. And therein lay the rub.

Few realised that the television would export many other things too, in addition to Gandhi’s face. It exports not just the message—which is what newspapers and radios do too—but it also shows how people move, how they dress, how they live.

All of a sudden, dormant villages, cut off from the mainstream of urban life for centuries, began to see how other people lived and to compare it with the way they themselves lived. The roads, the vehicles, the clothes, the consumer products… all these became causes for sadness, even rancor. And while the adults could dismiss these as urban delights and try to be content with what they had, few had reckoned with the child tugging at the father’s sleeve pointing to a consumer product advertisement on TV and plaintively demanding “I want that”.

The stirrings of consumer demand had woken rural folk. But there was a big problem. There was no money to satisfy this demand. And, as any observer of social trends will point out, a surge in desire without the ability to satisfy it causes a rise in resentment. The groundswell of discontent became palpable.

The gambit that Gandhi had used, had begun to backfire. She had to provide the rural areas with the means to satisfy this demand.

Consolidating power
The prime minister found her answer in the Indian banking system. To understand this part, it is worth remembering that Indira Gandhi had already nationalised 14 banks by 1969. The justification for this was that banks had to serve the rural areas, which they weren’t doing. The spiel rolled out was that banks had to be nationalised to save India’s poor and rural areas.

The story would have been believable but for one bank. Syndicate Bank was formed to serve the rural areas. Many of its borrowers and depositors were rural folk, usually fisherfolk. Then came dairy farmers. Industrialists got added to the bank much later. More significantly, it was the only bank that had its headquarters in a village (Manipal was just a village then). There was no need to nationalise this bank. But that is what happened. In fact, hindsight shows that all the touted benefits of nationalisation could have been achieved even through an administrative order—like the rule which compels banks to engage in priority lending—without the government snatching ownership.

Obviously, like most political actions, what is stated is usually not the real reason. The real reason was that the prime minister wanted to cut the purse strings of industrialists, in much the same way she had done with the princelings earlier.

The princelings had become a threat to her by forming the Swatantra Party. They had managed to garner as much as 20 percent of votes in Parliament; almost all its leaders were erstwhile princes. That could explain why the prime minister moved a Bill to cut them off the Privy Purse endowments they were promised as a Constitutional Oath when they agreed to amalgamate with India at the time of independence. When the Supreme Court shot down the Bill, she waited. Riding on the crest of popularity after the Bangladesh war in 1971, she managed to get new judges into the Supreme Court and got the Privy Purses case heard again.  She won that case, and the Privy Purses stood abolished.

By 1980, she nationalised another six banks, bringing the total number to 20. With the princelings routed, and the biggest banks under her command, there were few who would dare challenge her now. Even industrialists had to kowtow to her as she controlled industrial licensing and credit lines. And the insurance companies—LIC and GIC—were always around to dip into their funds to bail out friendly industrialists if needed. That, unfortunately, remains the case even today. Insurance companies do not disclose their net worth periodically even though they have the largest investible funds in India (https://tinyurl.com/yyclq3bf). Funds for the Opposition would obviously not flow that easily. But more on industry decimation a bit later.

Loan melas
With this type of control over the financial sector, it was no surprise that, when the rural groundswell of discontent grew, thanks to the TV, Gandhi asked her minister to use the banks. The die was cast.

Janardhan Poojary, her finance minister in 1982, announced a loan mela (janardhanapoojary.com) whereby people could get loans, without offering any collateral, at subsidised rates of interest. Everyone knew that much of the money would not be repaid, which is what happened. The banks began slipping into poor health thereafter. Loans to favoured industrialists, some blessed with coveted licences, worsened the condition of banks with each passing year.

Unfortunately, even after this experience, the politicians’ penchant for loan melas and loan waivers has not stopped (https://tinyurl.com/y6ll8zno). India’s legislators overlooked the simple truth: That it is safer to give money to the farmer to repay the bank; it is dangerous to teach him not to repay the bank, as it cripples the entire credit culture. The advantage eventually goes to the usurious moneylender, not the farmer, not even the banker.

But spurred on by this easy money, the economy roared to life. The GDP galloped and the country began growing. But as the fundamentals of finance were weak, this growth was not sustainable. More money was printed, which led to higher inflation and even higher interest rates. Term loan interest rates climbed to 14 percent and higher. It was during this period that even lending practices were turned on their heads. Long-term interest rates (through domestic financial institutions) were lower than short-term rates. That in turn caused most industrialists to divert long-term funds for short-term purposes. White-washing of books became a common corporate practice.

This was also the decade when industrialists were hit by shock after shock. They had already learnt to dilute their shareholding during the 1970s, thanks to a high wealth tax and a crippling estate (inheritance) tax.

At that time, Gandhi decided to allow Swraj Paul to try to take over Escorts Ltd from the Nanda family using Paul’s overseas funds. For the first time in decades, almost the entire industry howled in protest. The matter got taken up by the courts. Finally, Paul gave up.

But Indian industrialists learnt their lesson. They would not allow the government to reimpose high inheritance taxes or wealth taxes which crippled ownership of their own companies. The claw back of share buybacks began, including for groups like the Tatas and the Birlas. Many kept their shareholding overseas, away from the Indian taxman. That is why, when the present government mooted the idea of reintroducing inheritance tax, industry did not take it very kindly. It is a surefire recipe for flight of capital.

But the decade also gave rise to a few favoured industrialists. They benefitted tremendously from industrial licences, the ability to block licences for potential competitors, and through customs duty changes from time to time. It was like insider trading, with the government and the industrialist holding the aces. Many of the groups came on to the scene, raised public money, and then disappeared.

But some hardy industrial groups survived, even thrived. And that included the Ambanis, the Ruias (of Essar) and the Jindals. It is to the Ambanis that India owes a lot for teaching India Inc to think big, set up large projects, and finance them through a galvanised capital markets.  The Ambanis showed thousands of industrialists how to use shareholders for financing projects, and risk. This was also the decade when government policies (and trade unions) hastened the death of the textile industry. Mumbai, Ahmedabad and Surat ceased to be textile hubs thereafter.

All things said and done, the underpinning of the Indian economy changed because of the eighties, either through the unanticipated consumer demand, the body blows to the banks, the corrosion of the credit culture, and most of all the emergence of groups that taught India to think big.

It is indeed a mixed bag. But the scars and opportunities of the 1980s are there for everyone to see.