Jaitley sets stage for a grand revival in Modi Budget 2014 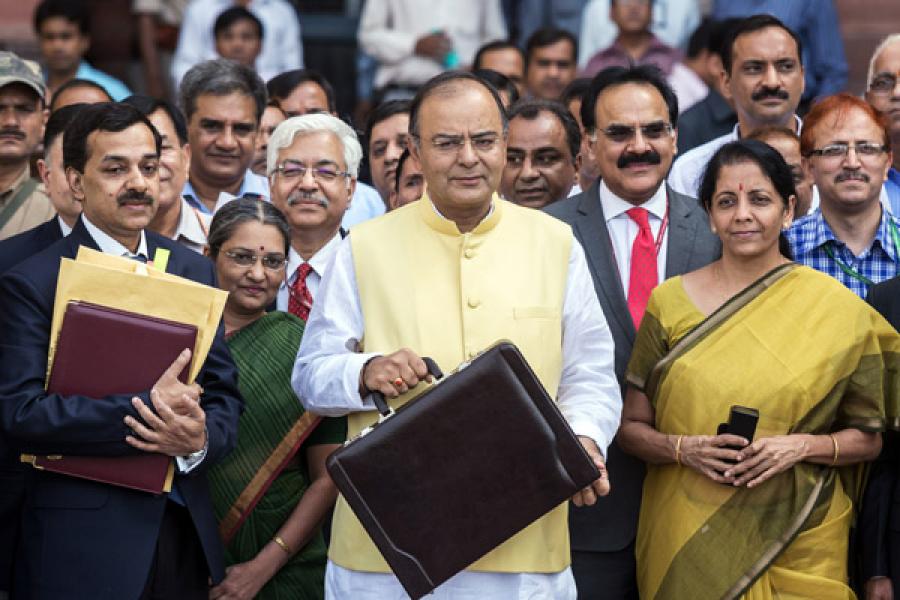 Like a batsman settling down for a long innings, finance minister Arun Jaitley, who presented the maiden Budget of the Narendra Modi government on July 10, chose to first get used to the playing conditions before coming up with the scoring shots. So it was a context-setting introduction to the Budget, and a few statements of intent here and there, before Jaitley really got down to demonstrating what he had in the bag.

Clearly, Modi’s Budget 2014 is a lot about the big picture and consolidation, even as it is conscious about the enormity of the task at hand. Consider Jaitley’s clear statement to that effect: “In the first Budget of this NDA government that I am presenting before the august House, my aim is to lay down a broad policy indicator of the direction in which we wish to take this country. The steps that I will announce in this Budget are only the beginning of a journey towards a sustained growth of 7-8 percent or above within the next 3-4 years along with macro-economic stabilisation that includes lower levels of inflation, lesser fiscal deficit and a manageable current account deficit. Therefore, it would not be wise to expect everything that can be done or must be done to be in the first Budget presented within 45 days of the formation of this government.”

An impatient market, straining at the bit for some big bang announcements from the finance minister, initially showed extreme disappointment and fell a steep 300 plus points at one stage. But by the time the minister was done with his speech which lasted well over two hours (with a five-minute break in between), the 30-share S&P BSE Sensex was up 450 points: A rebound of 750 points. The Sensex finally closed just 72 points — or 0.3 percent — lower indicating that the markets did not have any big problems about what they heard from the new FM.

The broad themes, if you will, of Jaitley’s Budget were inclusive growth, facilitating investment and entrepreneurship and sending a signal to the global investing community that India will work towards a stable policy environment. Whether one looks at the several proposals on education, health care, rural India, the farm sector or the underprivileged, or the broad tax proposals or those related to infrastructure creation and the capital market, it is these three broad themes which dominate Budget 2014.

Market friendly
What has gone down well with the corporate sector (which was unabashedly rooting for a Narendra Modi government in the run-up to the elections) and the markets is that Jaitley decided to take on the challenge of restricting the fiscal deficit to 4.1 percent of GDP for FY15, which he admitted was a tough task set out by his predecessor Palaniappan Chidambaram. For FY16 and FY17, the fiscal deficit target has been set at 3.6 percent and 3 percent respectively. Additionally, the disinvestment target has been hiked to Rs 58,425 crore. The FM has clearly decided to focus on fiscal consolidation despite keeping the growth and structural objectives in mind.

This has pleased Corporate India. Godrej Group chairman Adi Godrej, who has been vocal about the need for more reform and making doing business easier in India, told the media after the Budget that Jaitley had addressed some of the key concerns around growth and investment. Ashish Chauhan, MD & CEO of BSE, says: “In view of the difficult background, the efforts he has made in a short span of six weeks or less is commendable.” Chauhan specifically points to the “out-of-box thinking to expand the horizons and make the budget into a statement of policy instead of merely a statement of accounts”, citing the aggressive fiscal deficit targets and the aim of implementing the Goods and Services Tax (GST) by the end of the year as key elements.

Adds Puneet Chaddha, CEO, HSBC Global Asset Management, India: “This is a budget that focuses on speed, scale and skill. Speed - the push is for quick and time-bound decisions; scale - there is a lot of emphasis on improvement and more importantly expansion of infrastructure across a wider geography and skill - the effort is to improve the capability of individuals at the rural/small scale level to make them self-sustained.”

However, industrialist Harsh Mariwala, chairman of Marico, isn’t too impressed. “I had very high expectations of some pathbreaking reform measures. What has come has disappointed me. It seems more like a continuation of the United Progressive Alliance (UPA) budgets, not the kind I expected. There are some Rs 50-100 crore proposals here and there, but not much of a big picture. The investment allowance proposal is good. But to me it is a disappointing Budget,” he says.

There’s some good news for the capital markets, though. Chauhan feels his proposal of selling bank shares to retail investors will go a long way in improving market infrastructure and sentiment. He has also given a big boost to entrepreneurial activity by seeking to ease funding for startups. “BSE had requested for an SME fund of Rs 6,000 crore ($1 billion). The FM has not only accepted our request but also enhanced it to Rs 10,000 crore,” Chauhan points out. The markets and the corporate sector are also happy with the proposal to create infrastructure projects using the Public Private Partnership (PPP) model.

The proposals for deepening of the currency derivatives and corporate bond market, extending the 5 percent withholding tax to all corporate bonds, the revamping of Indian Depository Receipts into more exhaustive Bharat Depository Receipts are other proposals which the capital market has welcomed. The move towards a uniform Know Your Customer (KYC) setup across the financial sector and a single demat account for holding all asset classes are being seen as investor-friendly measures which would simplify the process of investing. The tax pass through status for real estate investment trusts (REITs) is also expected to galvanise such entities and spur the realty sector.

“Directionally, this is a good budget, where the FM has tried to address a whole range of issues that impact our everyday life as well as the ones that could make long-term impact and create sustainable economic as well as spiritual growth,” says Sudhir Dash, managing director of Investec Capital Services India. “The emphasis clearly seems to bring about fiscal discipline, review the government’s expenses and at the same time give a thrust to infrastructure and manufacturing.”

Stability of policies
While the Budget does not do away with the retrospective tax provision altogether, the FM’s intent was clear: The government would not “ordinarily” bring about any change retrospectively which brings about a fresh liability. Besides, all fresh cases arising out of the 2012 retrospective amendments would be scrutinised by a high-level committee of the CBDT before any action is initiated.

This move should go a long way in assuaging fears of foreign investors that India’s policy regime would not see sudden jolts in the future. Towards that end, the Budget also chose to broadly maintain status quo on tax rates while giving some relief to the ordinary taxpayer and encouraging savings.


Agenda for investment and reform
Jaitley’s Budget keeps infrastructure creation as a central pillar, even as it seeks to reach out to rural India and aim for inclusive growth. The creation of roads, waterways, new airports get enough prominence in the Budget speech and are expected to act as a multiplier, benefiting cement, steel, engineering and construction sectors, Dash adds.

On the other hand, the Budget also brings on the table the issue of consolidation of state-owned banks and seeks to enable banks to raise long-term funds to finance infrastructure without being burdened by statutory obligations. Investment banking circles see big positives in the moves to increase foreign direct investment (FDI) in insurance and defence which are now expected to have foreign strategic partners refocus their operations back to India in the hope that more such opening up will follow.

Entrepreneurship and skilling
With job creation as a prime challenge before the new government, one proposal which has gone down well is that of creating the Rs 10,000 crore fund of funds which would provide equity, soft loans or other funding options for startups. Another vexed issue, the lower capital ceiling for the definition of micro, small and medium enterprises (MSMEs) will also be sought to be raised, according to the Budget. Viewed together, these two steps should be cause for enough cheer for entrepreneurs and small businesses which are starved of organised funding and often see great ideas fall by the wayside. The Budget also proposes to launch Skill India, to skill the youth and focus on employability and entrepreneurship. A committee will also examine the financial architecture for the MSME sector.

Analysts, however, have also begun examining the Budget figures carefully with some wondering whether the revenue projections were realistic. The biggest relief for the corporate sector and the markets is that Jaitley has kept fiscal consolidation as a key pillar of this Budget and promised that his proposals would be met without compromising fiscal discipline. How the FM manages to do that will hold the key. The market, which has lauded Modi’s maiden Budget, is fickle and can change its mind pretty quickly. How Arun Jaitley executes his Budget over the next several months will be closely watched by domestic and foreign investors alike.