Gush of health science at IISc 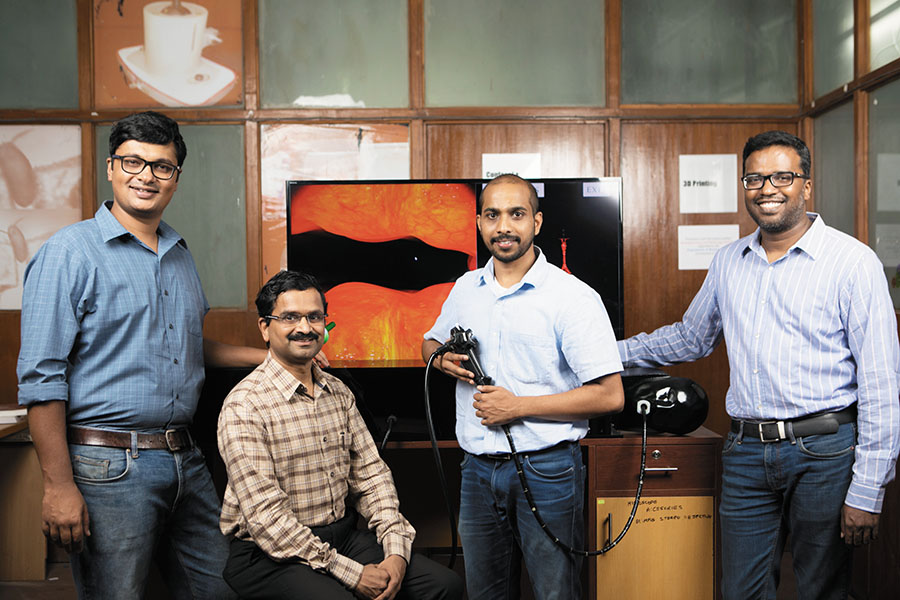 By the early years of the information technology boom, in the early 90s, Bengaluru’s standing as a hotbed of technology had already become well-established. Part of the reason why the city evolved into India’s Silicon Valley was the aura of science radiating from its prestigious educational institutions, among them the Indian Institute of Science (IISc).

The century-old institute, spread over 400 acres in the heart of the city, has always been a hub of innovation in engineering and the physical sciences. “[IISc] has laid a balanced emphasis on the pursuit of basic knowledge in science and engineering as well as on the application of research findings for industrial and social benefits,” says its director Anurag Kumar.

But in the last five years, IISc has also become a cradle of sorts for health care startups, thanks to new avenues of research in bioengineering. The institute’s life sciences departments have long coexisted with the engineering centres, but in the last decade-and-a-half, they have become a hive of activity through collaborations with the technology centres.

“At one end of the bioengineering spectrum you understand the fundamentals of biology using engineering principles, while on the other, you try to meet the unmet needs of the medical field,” says GK Ananthasuresh, professor and co-chair of the Centre for BioSystems Science and Engineering. “Work was happening, but it was never consolidated.” The latest interdisciplinary effort has resulted in a host of health care innovations.

Consider Mimyk Medical Simulations, for instance. The year-old startup, incubated at IISc, has developed an endoscopy simulator for gastroenterologists. Medical professionals insert an endoscope through the patient’s mouth or rectum (colonoscopy) to observe the digestive tract.

“Typically, a doctor needs at least 30 sessions to master endoscopy, while for colonoscopy it’s 10 times that, given the complexity,” says Ananthasuresh. “Some doctors whisper to us that they learn [endoscopy] by trying it on patients, which is not safe.” Mimyk’s simulator makes endoscopy easier by simulating the internal organs. Importantly, the device is designed for remote diagnosis of a patient.

In the US and Europe, simulator training in endoscopy is mandatory and the same rules are expected to be implemented in India too, where the devices are currently imported. “It’s a sophisticated instrument; something can go wrong [with it] and there’s nobody in the country [qualified] to repair it,” says Ananthasuresh, who, along with faculty members Vijay Natarajan and B Gurumoorthy, have been critical in supporting Mimyk.

The simulator is expected to be commercialised in a year. “It can be used internationally, and sold in India at an affordable price,” says Raghu Menon, 36, the company’s co-founder, who earned a master’s in design in 2005 from IISc’s Center for Product Design and Manufacturing.

Mimyk’s beginnings can be traced to the doctoral thesis of co-founder Shanthanu Chakravarthy, a 2016 PhD in mechanical engineering from IISc. For his thesis, Chakravarthy worked on haptics (technology that recreates the sense of touch) and simulation related topics for minimally invasive surgical (MIS) procedures. “It gave me an opportunity to build devices, which I enjoy doing,” says Chakravarthy, 32.

His initial research was carried out with the help of a ₹2 crore grant from the Robert Bosch Centre for Cyber Physical Systems at IISc. An additional ₹1 crore came from government grants. Balaji Gopal, 34, who worked as a project assistant with Ananthasuresh at IISc, and Nithin Shivashankar, 33, who has a PhD in computer science and automation, are the other co-founders. The four networked on the IISc campus.

Around 2015, after his PhD , Shivashankar began consulting with the centre to develop the graphics and simulation subsystems for Chakravarthy’s research. To that was added Gopal’s enterprise-building experience and Menon’s design and innovation management experience. “This [Mimyk] represents a collaborative project between the mechanical and computer science departments as well as the Centre for Product Design and Manufacturing at IISc,” says Shivashankar.

While Mimyk is a metaphor for the fresh avenues of research at IISc, it is not the only one. PathShodh Healthcare, incubated at IISc in 2015, has built a pocket-sized mobile lab that can run five blood tests and three urine tests for early diagnosis and management of multiple chronic diseases. For instance, this handheld device based on biosensor technology can measure glucose, glycated albumin (2 weeks average blood sugar) and HbA1c (3 months average blood sugar) in less than a minute, from just drop of blood.

Another biosensor product, the Fibre Bragg Grating Heart Beat Device, was developed two years ago by researchers at the institute led by Professor S Asokan of the Department of Instrumentation and Applied Physics. Based on optical fibre sensor technology, the medical device helps in the early diagnosis of heart and lung ailments.

Also worth mentioning is IISc-based startup MeduPlay, which has developed an advanced ICU simulator for training doctors and nurses in critical care. The simulator, operated either autonomously or by a trainer, was designed to present complex medical scenarios to challenge doctors and nurses. “The simulator’s commercialisation is now happening. Karnataka state [government] wants to give it to every hospital,” adds Ananthasuresh.

All of these innovations are aided by grants from industry and the government of India, which, led by the department of biotechnology, has sanctioned ₹25 crore to IISc for health care innovations. To the field of neuroscience research, the institute has received a ₹75 crore grant from Tata Trusts, while Infosys co-founder Kris Gopalakrishnan has committed ₹225 crore to the establishment of a Centre for Brain Research at the institute.

“We have someone developing a powder-based inhalable drug for tuberculosis, while someone else is working on developing magnetic nanoparticles for the treatment of cancer,” says Ananthasuresh, who himself along with two other faculty members has developed an intracranial pressure sensor. The wired device is inserted between the brain and the skull to help diagnose head injuries. “We’ve tested it. Now we want to commercialise it. We are also looking at a wireless option,” he adds.

But commercialisation is no walk in the park for any startup. As Mazumdar-Shaw puts it: “A lot of entrepreneurs focus only on product development and not on critical aspects like regulatory strategy, commercialisation, or the need for partnerships with companies. They think that if they have started a company they have to do everything themselves. I didn’t build Biocon that way. They have to start cross-leveraging expertise as one cannot do everything oneself.”

Tweets by @forbesindia
The selfie gene: Putting on our best face
Ideas in full bloom at AIIMS