Ideas in full bloom at AIIMS

The School of International Biodesign at AIIMS believes in the philosophy that innovation must not be left to chance, but to design 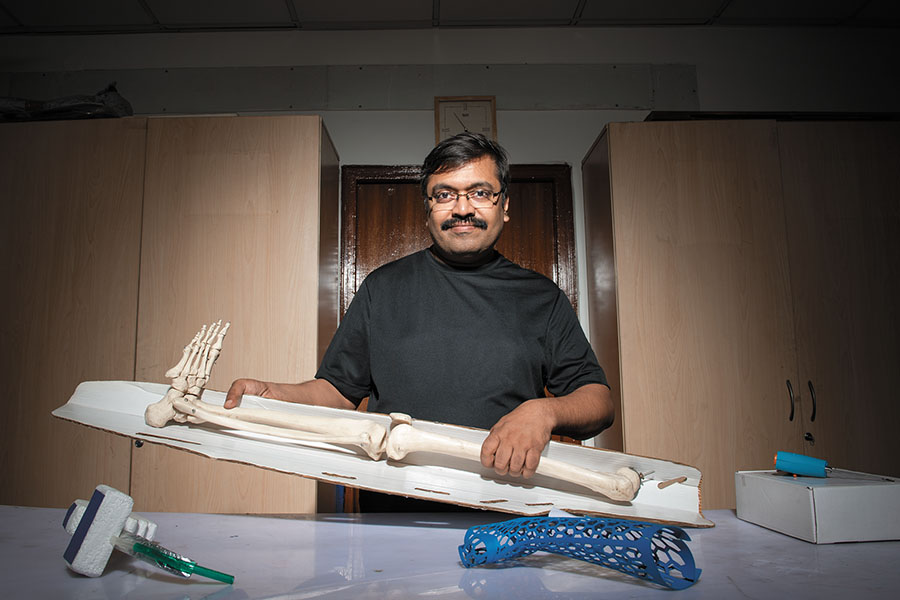 Dr Prashant Jha, fellowship director of the School of International Biodesign. The institute is funded by the ministry of science and technology
Image: Amit Verma

Nitin Sisodia can claim full credit for the spark of innovation that led to the idea of SOHUM—a low-cost, non-invasive device that screens newborns for hearing impairments. But a part of the credit for developing the idea from concept to market goes to his alma mater, the School of International Biodesign (SIB), and its fellowship director Dr Prashant Jha.

In the past decade, many of Jha’s students have gone on to build medical technology companies, which include Sisodia’s Bengaluru-based Sohum Innovation Labs, Consure Medical that has developed the faecal incontinence management device Qora, Flexi OH that has made a lightweight cast for fractures and Brun Health, known for its low-cost labour monitoring device.

“These companies have managed to raise upwards of $10 million in investor funding,” Jha tells Forbes India. “The belief of the programme [at SIB] is that we should not leave innovation to chance, but to design.”

SIB, located at Delhi’s All India Institute of Medical Sciences (AIIMS) is run by a consortium of Indian, Japanese and Australian universities and funded by the ministry of science and technology.

Every year, the school admits eight Indian and four foreign students as part of its one-year fellowship programme. The broad idea of the fellowship is to build health care products that can be scaled into a company. The government provides the students with stipends and meets other expenses during their tenure. Students spend time identifying unmet clinical needs, developing a product that can solve the problem, filing patents, and then scaling them up to companies. In return, the startups have to pay a certain royalty to the government once they start selling their products.

SIB began life in 2008 as the Stanford India Biodesign programme—a collaboration between Stanford University, AIIMS and IIT-Delhi with funding from the department of biotechnology. “At the time, the idea was to send Indian students to Stanford; after which they could return to solve some of India’s health care problems,” recalls Jha.

In the next three months, they are asked to define the problems they come across. The students also spend time in partner universities to validate the problems they face. “Many of the problems in India are also global,” says Jha. The third phase, spanning six months, involves designing a product. At the same time, students also file provisional patents and build prototypes, besides planning commercialisation.

Some students stay on for an optional second year to build their own companies. The final two phases include incorporating a company, raising funds and then deploying the product in the market. “So far, 10 companies have come out of the programme, and they provide employment to over 150 people, in highly-skilled jobs,” says Jha.

“Indians are good at analytical skills, medicine and engineering. But, when it comes to innovation, we lag behind. There are numerous low-hanging fruits that can solve many pressing needs. The programme helps with innovating new products and solving needs,” says Sisodia.

Jha wants to increase the student intake to 20 by 2020. While there have been dropouts, Jha reckons that over 80 percent of the fellows have become medtech entrepreneurs, while the others have joined multinational companies.

The school also has an intensive four-stage admission process, and Jha wants to maintain it that way. “We are under constant pressure to scale up but we want to resist that temptation,” says Jha. “We don’t want to attract the wrong crowd. We want genuine, hardworking students, who are willing to learn and solve a problem.”

Over the next few months, the school plans to make its classroom teachings available to budding entrepreneurs, particularly from the remote parts of the country. “That way, more people can try and find solutions for some serious health problems,” says Jha.