Weak players in organisations can overcome their dependence on powerful actors, but it comes at a cost

Alexis Tsipras, the new left wing prime minister of Greece, is in a tight spot. Having spent much of his time trying to coerce the powerful countries of Europe into accepting Greece’s rejection of the agreements signed between the EU and the prior Greek government, he’s not getting any closer to achieving his goals. He cannot reduce Greece’s dependence on the “troika” and has been unable to rally allies to his cause. Greece is running out of money, and out of time.

The case of Greece reminded me of my recent paper with Assistant Professor Gokhan Ertug, The Power of the Weak (2014), which examined the strategies weak organisational players can employ to attenuate their dependence on the powerful. Greece is the weak, but has tried to negotiate from an illusory position of strength. Such an approach was unlikely to work. To understand why, I would like to revisit our analysis of how weak organisational members can reduce their dependence on the powerful. 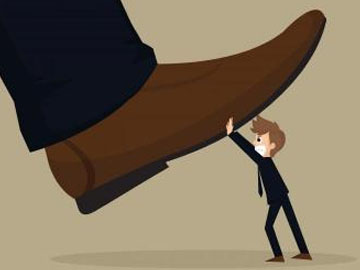 Image: courtesy INSEAD
The Inequality of Power
Power is unequally distributed in organisations. Typically, people in the higher echelons of the hierarchy depend on those below much less than the latter depends on them for resources. It is this asymmetry that confers power. Yet, weak organisational members can attenuate the negative consequences of their dependence by implementing a number of strategies that can reduce the power of the strong or at least curtail their ability to use such power.

Gaining Control
First, weak players can try to take control of resources important to the people they depend upon. For example, they could monopolise information or knowledge on a key issue of interest for the powerful party, increasing its dependence on the weaker player. This is behind the disproportionate influence wielded by technical experts in industrial disputes, or the privileges enjoyed by irreplaceable executive assistants.

Third, the weak player may try to build a tie with a third party that can have influence on the powerful individual. If successful, this manoeuvre should make the powerful party reconsider its behaviour towards the weak. In fact, research suggests that even creating the impression that such ties exist can make the stronger party think twice about using power against the weak.

Fourth, weak players can also enhance their position by forming coalitions with other weak parties, limiting the ability of the strong party to use its power in their relationship. Many new managers soon realise that they have much less power over subordinates than their formal position suggests. These subordinates have been working together for years and would easily come together if they feel that the new manager is abusing his or her power. This cohesiveness is ultimately what accounts for the power of cartels such as the Organisation of Petroleum Exporting Countries (OPEC) in the global economy. When employees can form a coalition, the manager’s ability to use power is drastically reduced. This was the case of the strike at Market Basket, when thousands of staff walked off the job to protest their boss’s firing.

The bottom line is to develop a network of relationships that go beyond the people you depend on. As I wrote in this earlier article, it’s also important to make sure your network is composed of people in different positions and at different levels. If you just flock with those like you, you’re less likely to build a network that can help you when you need it.

What Got You Here…
Unfortunately for Greece, Tsipras got it wrong on all four points. He has overestimated how much keeping Greece within the euro matters to the powerful parties in the European Union like Germany. His combative approach made it hard for him to get any sympathy from powerful countries whose populations are strongly opposed to giving Greece a break. It has also alienated potential allies like France, a powerful party which has been also reluctant to introduce structural reforms but which does not want to be identified with the hard stance taken by Greece.

Tsipras also failed to see that he was unlikely to get support from other “weak” parties like Italy, Spain and Portugal. These governments are confronting significant Syriza-like internal challengers that could be empowered if the Greek strategy were to succeed. Moreover, as their countries have started to recover, they don’t want to appear as “another Greece”.

A desperate Greece may want to leverage its strategic geographic location and try to create closer ties with Russia. Even if that turns out to be an option, it would be a dangerous one. Given the current tensions over Ukraine, such an alliance may put Greece (a NATO member) in a delicate position, further alienating it from the European Union and not just from the common currency. That may prove too much for the Greek people, which would ultimately bear the costs. Before pulling the trigger, it is wise to verify which end of the gun one is holding.

Like all weak players, Tsipras should have realised that not all strategies to rebalance a dependent situation are available in any given situation and play his cards accordingly. The weak can gain leverage on the strong, but not by pretending to command resources or allies they do not have. Seemingly oblivious to these facts, the prime minister has been playing a dangerous game in which others may be hurt, but ultimately he and his people may suffer the most.

In a follow up article, I will examine what weak organisational players have to do once they gain positions of power. The techniques used to overcome weakness often become irrelevant once you get beyond a weak position and the alliances and relationships you build could become shackles or, at worst, a trap in the next stage of your career.

Martin Gargiulo is an INSEAD Professor of Organisational Behaviour and programme director of the High Impact Leadership Programme, one of INSEAD’s executive development programmes.