Investors have pushed Rishi Shah's startup to a $5.6 billion valuation 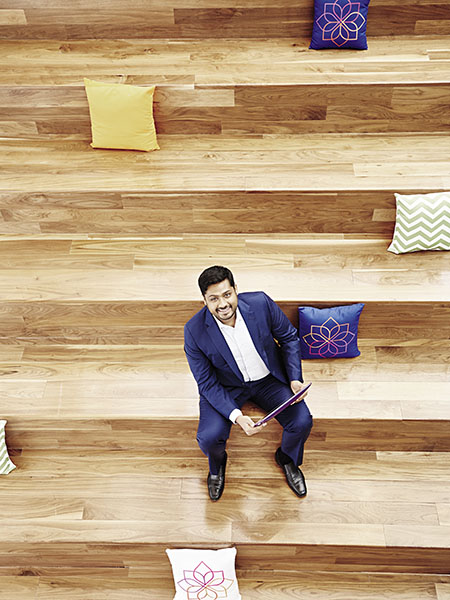 The intended outcome of Outcome Health’s marketing is clear. You’re meant to think it purveys sophisticated medical technology. Its website has slick videos and impressive-sounding statistics. Outcome, it says, provides “health intelligence to more than half a billion patients a year”.

But Outcome is really a media company; its CEO, 31-year-old Rishi Shah (right), launched it with president Shradha Agarwal and a third co-founder as ContextMedia nine years ago. It instals tablets and interactive screens in doctors’ offices that display medical information from Outcome’s 100 or so content partners—cancer data in an oncologist’s waiting room, say, or 3D depictions of anatomy for specialists to share with patients. It also displays ads, mostly from pharmaceutical companies such as Pfizer and Merck. Shah says Outcome had nearly $200 million in revenue last year, the biggest chunk from advertising.

Hardly life-saving. But after stonewalling investors for years, Chicago-based Outcome is now attracting money faster than if it offered a new wonder drug. In May, Shah announced an initial outside funding round of just under $600 million from firms such as Goldman Sachs, Google-affiliated CapitalG and the Pritzker Group, equating to a $5.6 billion valuation. That bullish number assumes Outcome will be in a majority of doctors’ offices in just three years. It also means that Shah’s 71 percent stake in Outcome is worth about $3.4 billion, even after accounting for company debt.

Such eye-popping numbers have some muttering about another Theranos. Investors say the company has long been profitable and does more than marketing. Perhaps Outcome fans did learn something from Theranos, though: They have a put option that lets them cash out their shares in six years, whether Outcome goes public or not. Just in case.

Tweets by @forbesindia
Byju's acquires TutorVista and Edurite from Pearson
The gate and beyond it: The soul-stirring Kailash Mansarovar