Reservation's fine, but where are the jobs?

Without job creation, the government's nod to 10 percent reservation for the poorer sections may end up compromising efficiency 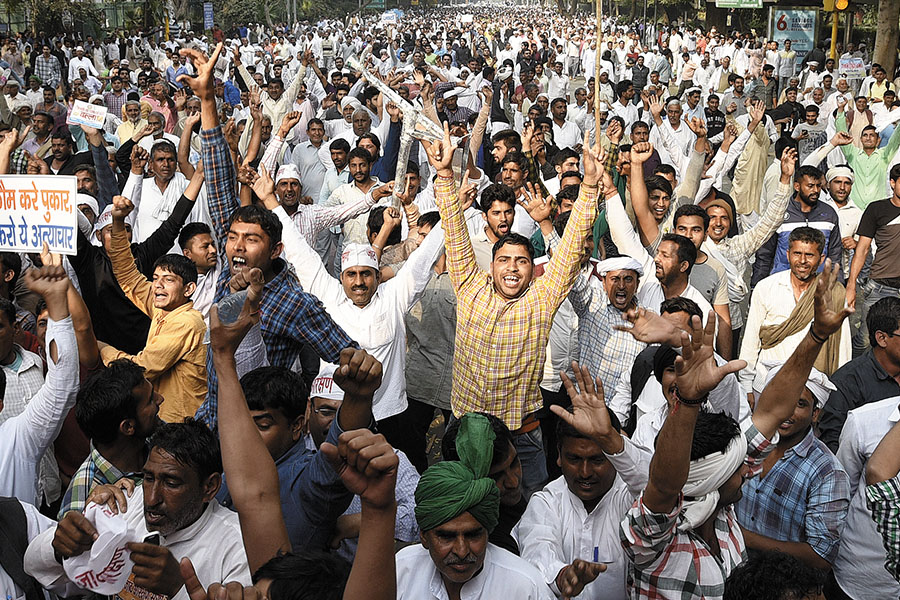 Blast from the past: Members of the Jat community protest in Delhi in March 2017, demanding OBC status, and reservations in jobs and educational institutions falling in line
Image: Sonu Mehta/ Hindustan Times via Getty Images

Prime Minister Narendra Modi has pulled a masterstroke ahead of the general elections. The government has given its nod to a 10 percent reservation in government jobs and higher education for the economically weaker sections in the general category. The new law categorises those who earn less than ₹8 lakh a year or have less than five acres of land as economically weaker. The latest offering will be over and above the existing 50 percent reservation for Scheduled Castes and Scheduled Tribes and Other Backward Classes that is already in place.
The question is how will the government navigate through the plan? At a time when India has not been able to create new jobs, it is unlikely that the government will create them to accommodate the latest requirements for reservation. “There certainly won’t be any new jobs that will be created,” says Madan Sabnavis, chief economist of Credit Analysis & Research Limited. “What will happen is that existing jobs will have to accommodate those who fall in the new reservation category, and that could lead to concerns over efficiency. What the government needs to do is to ensure that such policies are accompanied by better training to those who get the jobs so that efficiency won’t be affected. The policy is more progressive than caste-based reservations, but there will be lesser jobs available for people outside of the categories.”
India’s job growth turned bleak in the past year, as almost 11 million Indians lost their jobs, according to a report by the Centre for Monitoring Indian Economy. Individuals belonging to vulnerable groups were worst hit. “An estimated 9.1 million jobs were lost in rural India and 1.8 million in urban India. Rural India accounts for two-thirds of India’s population, but it accounted for 84 percent of the job losses,” the report said.
“What the government is doing is, taking things away from the left pocket and giving it to the right,” says Pranay Swain, chairperson, School of Humanities and Social Sciences at the National Institute of Science Education and Research. “There won’t be any new jobs that are likely to be created. What the government can do, however, is ask the private sector to accommodate some jobs, and in turn, provide them some benefits.”

Tweets by @forbes_india
Is the budget subsidy data telling you the real story?
10% quota could increase vacancies at educational institutions