There were a number of other tales that were a touch lighter than headline making World Cup and Winter Olympics. Here are 'Six of the Best' bizarre stories to have touched the world of sport in 2022 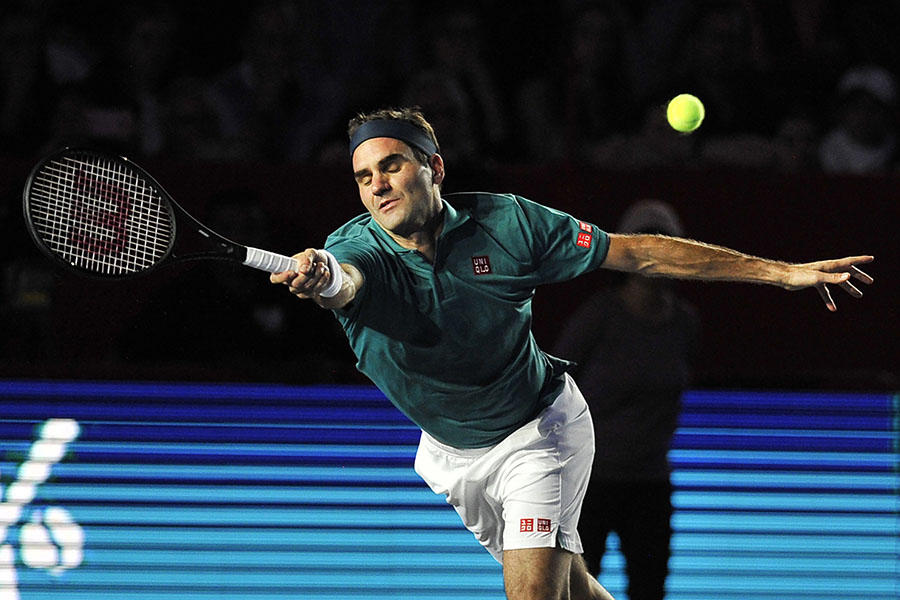 Roger Federer has won the Wimbledon championships eight times but a security guard at All England Club refused him entry because he didn't have his membership card. Image: Claudio Cruz / AFP

After the hiatus of the Covid years, the world of sport leapt out of the traps in 2022 to make up for lost time.

A Winter Olympics and World Cups in men's football, cricket T20, women's rugby union, men's and women's - and wheelchair - rugby league, a well as the women's Euros made for a busy 12 months, not to mention a full programme of individual sports.

All serious stuff that filled the front and back pages. However, there were a number of other tales that were a touch lighter.

This is AFP's 'Six of the Best' bizarre stories to have touched the world of sport in 2022.

Scientists in Serbia made quite the buzz when they named a newly-discovered insect species after tennis star Novak Djokovic, due to the bug's "speed and tenacity".

Biologist Nikola Vesovic described the insect on Instagram as "a specialised, blind, subterranean ground beetle found in a pit near the town of Ljubovija" in the west of the country.

"It is very quick and eats other small animals," he told AFP. "It is a predator in its underground environment, just as Novak is a kind of predator on the tennis courts."

It is the second such honour to be bestowed on Djokovic who has a habit of swotting away opponents on the court - a couple of months earlier a freshwater snail in Montenegro was also named after him.

Ugandan prison staff were banned from using their mobile phones during the World Cup, apparently because inmates might exploit the "excitement" surrounding the football tournament to escape.

Frank Mayanja Baine, spokesman for the Commissioner General of Prisons, said that the prison officers phones might "distract attention and interfere with the level of alertness".

Their cellphones obviously did not have enough bars.

In his heyday his was one of the most famous sporting faces in the world. Three months after his retirement, however, it seems Roger Federer is a forgotten man -- at least in London SW19.

That's the postcode of the All England Club where Federer won the Wimbledon championships eight times.

That, however, counted for nothing to a zealous security guard who refused the great man entry as he went in search of a cup of tea because he didn't have his membership card.

"I'm like, 'Uh, we have one?'" Federer told American TV programme 'The Daily Show'.

"Because when you win Wimbledon, you become a member automatically.

Also read:  Why an Indian owner of an elite football club could be a win-win

"Honestly, I don't know about membership cards. They're probably at home somewhere.

"I look at her one last time and I'm in a panic now...And I say, 'I have won this tournament eight times, please believe me, I am a member and where do I get in?'"

Federer was finally allowed in at another gate thanks to the back-up of a member of the public who vouched for his record on the famous grass courts.

Cricket 'bible' Wisden ruffled feathers when it announced that it was cutting two of WG Grace's centuries which it no longer considers first-class.

Given that the good doctor, arguably the sporting superstar of the 19th century, died 107 years ago in 1915, one might wonder who cares. Not WG at any rate.

It does mean, however, that his historic 100th century is no longer deemed to be the one he scored for Gloucestershire against Somerset—much celebrated at the time—on May 17, 1895, instead coming with no fanfare at Middlesex against Lord's a fortnight later.

The change does not appear to have damaged the memorablilia market, though, with original souvenir plates, issued in 1895 to commemorate the feat, still selling on eBay for £1,020 ($1,250).

Skiing in the sand

With the world trying to work out how to combat global warming, it may be that Saudi Arabia has found the answer: turn the deserts to snow.

That appears to be the plan at any rate after Saudi—which, let's be clear has an average temperature by the coast of 27°C to 38°C—was chosen to host the 2029 Asian Winter Games.

It will be held at an under-construction $500 billion futuristic desert megacity that planners say will feature a year-round winter sports complex.

Also read:  Fun and Games: How sports tourism is picking up pace in India

Just as the French play petanque and the English knuckle down to their marbles, so the Americans eat their hot dogs.

Boy, do they eat hot dogs. So much so that the playfully named Joey "Jaws" Chestnut wolfed down 63 - buns included - in just 10 minutes, to win the annual Nathan’s Famous Fourth of July Hot Dog Eating Contest on Coney Island in New York.

Multiple champion Chestnut apologised to the crowd, though, as he fell some way short of the 76 he crammed down in 2020.

"Joey Chestnut is a force from beyond who defies the laws of physics," said contest host George Shea who says the contest is "arguably the most iconic sporting event in American history".

Miki Sudo, who missed last year's event because she was pregnant, won the women's event with 40, eight shy of her own record.

Tweets by @forbesindia
What will 2023 bring for travel & hospitality
Forbes India 2022 Rewind: Top 10 stories you loved the most