Pugilist Nikhat Zareen has fought off challenges and broken stereotypes to become a world champion. Now her eyes are set on Olympics gold 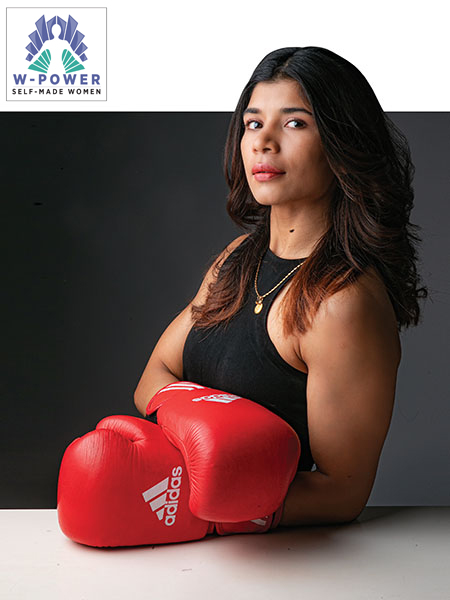 It all started with proving a point.  When she was young, Nikhat Zareen’s father, a sports enthusiast himself, took her to the Collector Ground in Nizamabad to train her in athletics. Zareen was a tearaway sprinter, but something else caught the eye of the then-13-year-old. While most of the other sports being played at the stadium saw mixed-gender participation, the boxing ring stood out as an all-male preserve. “I asked my father why, and he replied that people considered girls too weak for the sport,” says Zareen. “That’s when I decided to shift to boxing and I told my dad that, one day, I will prove everyone wrong.”

The returns came early. Zareen, who was the only girl sparring with boys, turning a blind eye to ogling passersby, won the junior nationals in 2010 and, within a year, emerged as the junior/world youth champion. But her transition to the senior echelons took a little longer: She won her first senior title in 2015, but then was out for a year in 2017 with a shoulder injury. Even when she was up and about, Zareen was overshadowed by a colossus in her category—Mary Kom, a six-time world champion. Matters came to a head when she sought a bout against Kom during the Olympic trials for her right to fight in Tokyo, to which the latter retorted: “Who is Nikhat Zareen?” 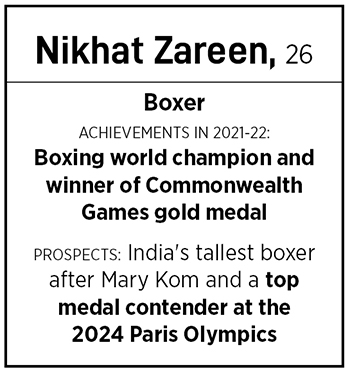 That’s one question Zareen can now bury forever. Not just because the two champions have patched up since, but also because of the spate of achievements she has notched up this year. In February, Zareen struck gold at the Strandja Memorial Tournament in Sofia, Bulgaria, one of the top tournaments in boxing, but her crowning glory came in May when she won the World Championships in Turkey, becoming only the fifth Indian woman to be crowned world champion. She continued her winning run at the Commonwealth Games in Birmingham, returning with gold in the light flyweight category.

“The World Championship tops everything else till now. It’s completed the full circle from the time I won the world junior crown,” says Zareen. “But, for me, the best is yet to come because my ultimate dream is to win the Olympic gold.” 2023 will be a busy year in her quest for the elusive title, beginning with the World Championships in Delhi and the Asian Games in China that will serve as a qualifier for Paris 2024. Which means more of getting into the zone and shunning “normal life”—hanging out with friends, going shopping, or skipping the biryani to watch her weight (“I’m a big foodie,” she says).
Watch now: Success In Life Is About Learning How To Fail Well: Abhinav Bindra On Pathbreakers

But Zareen isn’t taking shortcuts—she’s reconciled with the monk-ish life an athlete has to lead to achieve her “maksat [goal]”. Instead, she quotes Ronald Simms, one of her coaches, for a statement she lives by. “He had once told me that if you can train for two hours non-stop, why do you tire out during a match that only has three rounds of three minutes,” says Zareen. “Prepare yourself so well, he had said, that those three minutes are a cakewalk for you. It changed my entire outlook towards boxing.”

What makes Zareen such a formidable boxer? Her ability to think on her feet, says John Warburton, lead coach and head of the boxing programme at the Inspire Institute of Sports in Bellary, Karnataka, where the 26-year-old loves to train when she’s not at the national camp. “She doesn’t have to be told what to do—she knows when to box long range, when to change angles or the tempo,” says Warburton. “She reads her opponents well. When the going gets tough, she can fight back. A coach would never call his ward perfect, but I can say that she’s an all-round boxer.”

When Zareen took to boxing, she not only had to jab and punch her way through her opponents, but also societal norms that questioned why she had taken up a ‘man’s sport’. “We’ve had to face criticisms from even family and friends, but my father would always say that if I could win medals, all these naysayers would flock to take photographs with me,” says Zareen. That hour has arrived, and then some more.