Radha Basu, founder and CEO of iMerit, has been building a company that leverages the potential of artificial intelligence and machine learning while focusing on inclusivity and social impact 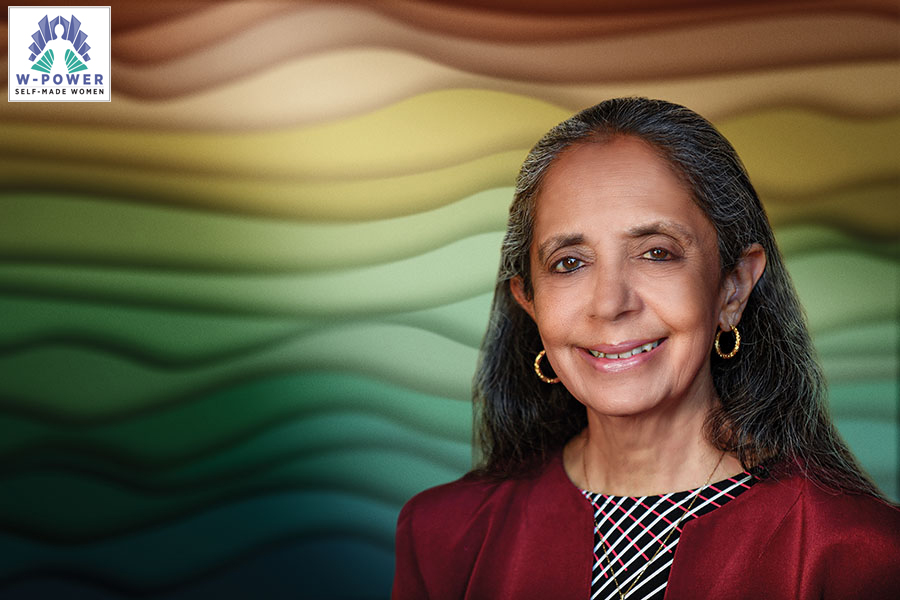 It was at an early age when Radha Basu realised the importance of inclusion. In 1966, she decided to make a career out of her childhood fascination for science, and enrolled into an engineering college in Guindy, Tamil Nadu. She was one among the 17 girls in a cohort with 2,500 boys. She had studied in an all-girls school, and college taught her how to adapt to unfamiliar environments. Years later, when she joined the male-dominated technology industry and launched her own company, this experience became foundational for her efforts towards ensuring not only diversity, but also inclusion of people from various backgrounds in the workforce.

Her company, iMerit, is an artificial intelligence (AI) technology organisation that provides data solutions to power machine learning (ML) and AI applications to large enterprises globally in a variety of industries, including medical AI, agricultural AI, financial services, geospatial technology and autonomous vehicles. It has close to a 6,000-strong workforce—“a large number” of which is in India, says Basu—trained in computer vision and natural language processing, among other things.

What is different about the business model is that this workforce largely comprises women and youngsters from rural or underprivileged backgrounds. The reason for this goes back to the time when Basu, after her master’s degree in computer science and biomedical engineering from the University of Southern California, had a successful 20-year career at Hewlett-Packard, including launching the operations of the technology company in India in 1985, and setting up the first software centre of any multinational in Bengaluru. 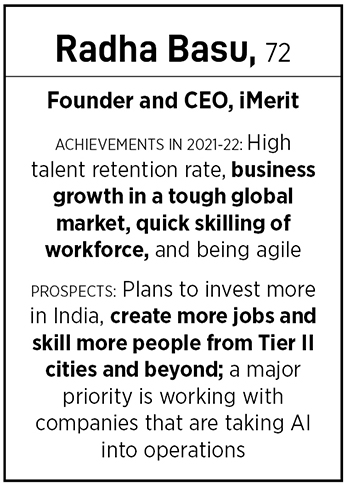 That was the time, Basu recollects to Forbes India, when IT was starting to show signs of being an industry that would spur immense wealth and job creation. But a lot of people did not believe, she adds, that young people from diverse, rural or underprivileged backgrounds, or young women, could be at the forefront of this technology. “So the whole idea was to be able to leap forward and bring these young people into the global digital tech world,” she says.

It takes a heavy amount of skilling, but the business value and growth of this dedicated workforce is immense, according to Basu, who divides her time between India and the US and is here almost every quarter.

In the 10-odd years that it has been around, iMerit has always had a workforce where 50 percent or more employees are women. “Our retention is the highest in the industry,” Basu claims. At a time when companies are seeing close to 30-35 percent attrition, “our attrition is less than 10 percent”, she says, adding that business also grew by 80 percent during Covid, while declining to share revenue numbers.

About 80-85 percent of iMerit’s clients are in the US, but AI in India—and Asia—is “growing and is going to be a really important market”, Basu says. “When we look at the workforce part of it, we are heavily invested in India, but are planning to invest in other countries as well.”

iMerit’s sister organisation, non-profit Anudip Foundation that is headquartered in Kolkata, is focussed on skilling and creating digital livelihoods. As per its 2021-22 annual report, it has trained more than 150,000 people and has impacted the lives of 100,000 women since its inception in 2007.

In India, iMerit has eight data centres, including in Visakhapatnam, Shillong, Hubbali, Ranchi and Bhubaneswar. It has raised close to $25 million so far, and investors include Omidyar Network, Khosla Impact, and the Michael and Susan Dell Foundation.

Basu leads her company with empathy and ambition, says Anand Srinivasan, COO, Michael & Susan Dell Foundation, which has invested in iMerit since 2015. “She pushes the organisation towards excellence while making sure that the team she leads is equipped with capabilities to solve the most challenging aspirations of iMerit’s clients,” he says.

“iMerit is helping companies unlock value from their unstructured data, while creating opportunities for employment in the global digital economy for segments that are typically ill-equipped and lack access to quality jobs,” says Shilpa Kumar, partner, Omidyar Network India, which first invested in iMerit in 2011. “Radha brought her past strategic and operational business experience to seed an impact-focussed company. This ensured that while there is a strong social impact anchor, there is an equally strong focus on building a technology-led sustainable and profitable enterprise.”

Tweets by @forbesindia
Nikhat Zareen: Punching her way to Olympics gold
Sam Bankman-Fried and the FTX crash: A quick recap of the rise and fall of crypto's blue-eyed boy