Women and math do go hand-in-hand, and Neena Gupta, a mathematician with multiple awards in her kitty, is a fine example of that 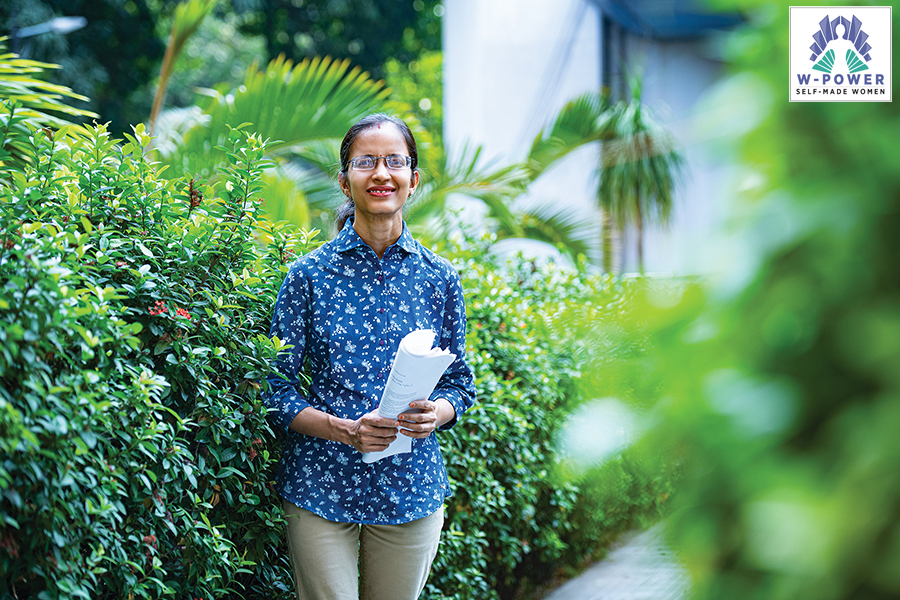 The subject most children fear is the one that Neena Gupta loved. “My mother never counted practising math in my study time,” says the 38-year-old professor at the Theoretical Statistics and Mathematics unit in Kolkata’s Indian Statistical Institute (ISI). “She thought it was my hobby.”

But that the hobby would culminate into bagging awards for exemplary research in the subject is something no one in the family, including Gupta, had ever thought of.

In 2014, she was awarded the Young Scientists Award by the Indian National Science Academy (INSA) for solving the Zariski Cancellation Problem, posed by Oscar Zariski, one of the most eminent founders of modern algebraic geometry.

“One of the best works in algebraic geometry in recent years done anywhere,” was INSA’s remark on Gupta’s solution. In 2021, she was awarded the Ramanujan Prize for young mathematicians for her series of outstanding work in affine algebraic geometry and commutative algebra, particularly for the Zariski Cancellation Problem, that had remained unsolved for 60 years until 2014 when Gupta cracked it. 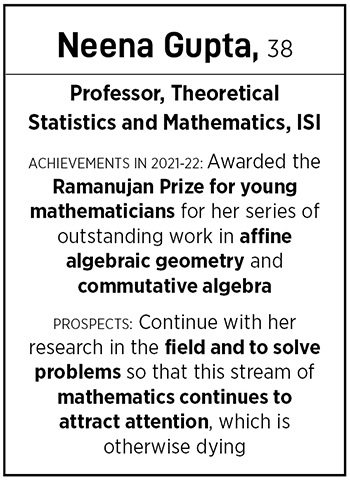 With this, she became the third woman and the fourth Indian to win an award given to mathematicians under 45 who have conducted outstanding research in a developing country.

For a problem that remains open for that long, it takes some amount of perseverance and self-belief to attempt it, according to Amartya Kumar Dutta, Gupta’s professor, guide, and fellow faculty member at ISI. “She is a problem-solver, who possesses originality, and is highly receptive,” says Dutta, who has known Gupta for 15 years. “Her growth has been phenomenal and she will continue with her stellar performance for as long as she can.”

Her love for math, Gupta says, came naturally to her as her parents were very good at it. “Although I liked all subjects, except literature which I was weak in, maths had a certain charm that was hard to describe and then it became a way of life for me,” she says.

With her, there was no question of feeling intimidated by science, technology, engineering, and mathematics (STEM). Her mother was her biggest cheerleader who never let anything come in the way of her studies. “When women support women, the fear disappears,” Gupta says. There have been instances when some teachers in school would tell the girls it was futile to pursue higher studies when they ultimately had to end up in the kitchen. “It hurt me, but it motivated me to do more than learn household chores or cook, which everyone, irrespective of gender, should know how to do. That can’t be a woman’s destiny,” she adds.

Gupta went on to complete her graduation in mathematics from Kolkata’s Bethune College, and her postgraduation in mathematics from ISI. She earned her PhD with commutative algebra as her specialisation later. “But I didn’t know that I could pursue research in mathematics because you’re never taught in school or college that this is a continuously developing field as well,” she says. “When I tell someone I am researcher in the subject, their first reaction is that I’m developing more formulae and making their life difficult,” she laughs.

While Gupta continued to solve problems, the Ramanujan Prize came as a surprise for her, on her birthday. “What else can a mathematician want?” she says. “It is a big recognition from outside India, and to receive it at an early age is said to be no easy feat.”

Having said that, for Gupta, the recognition is more than a personal victory. “It is a message to all the women that they need not fear STEM or mathematics.”

And things are looking up. “When I came to ISI to pursue my master’s, I was the only girl in my class. But I have seen a significant increase in the numbers since being a faculty member here.” She adds, “There are many great mathematicians in the country who are women, but we hardly know about them. They can be such great influencers on children.”

Tweets by @forbesindia
How to craft a fulfilling career
Nikhat Zareen: Punching her way to Olympics gold