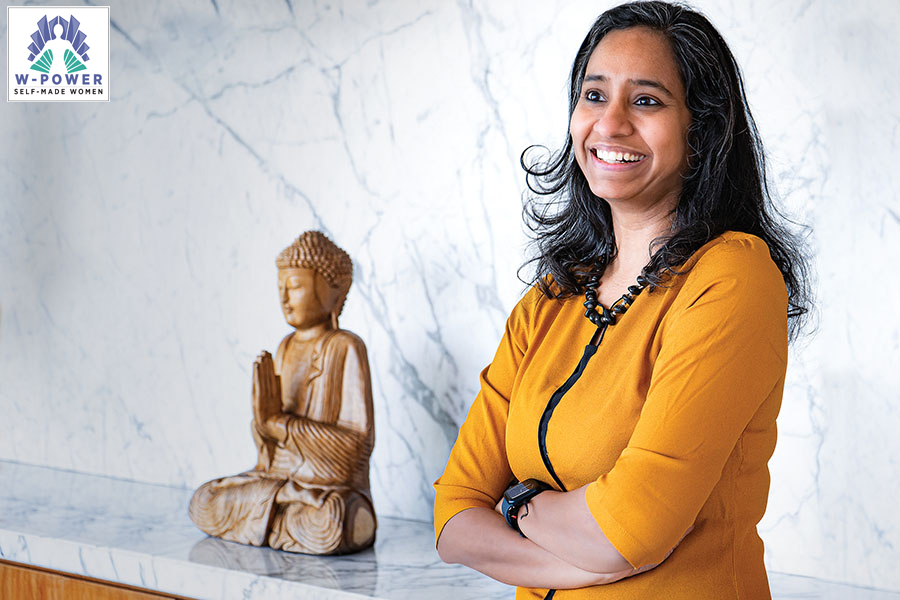 As a child, at every fancy dress competition, Lakshmi Iyer always dressed as a teacher or a doctor. “As a student I had a flair for science and I aced it as far as grades were concerned,” Iyer recalls. But destiny had other plans. Iyer’s knack for numbers opened new doors, and soon Iyer found herself in exciting but unfamiliar territory. “My love for numbers guided me into the world of finance,” says the chief executive of Kotak’s investment advisory business.

Iyer got her start in her early 20s, when she landed a job at the newly-opened firm Credence Analytics. She was part of the team that was responsible for curating and integrating financial data. “We used to sell the data on floppy discs,” she says with a laugh. “Today people talk about fintech, but as early as 1998, I was tracking bonds and trying to marry finance with tech.”

Iyer confesses she was not a coding expert. But she spent many afternoons at Mumbai’s Kitab Khana to read whatever books she could find on the subject. “The software guys did not understand the market, and the market guys were oblivious to coding. Here I found my opportunity,” Iyer says.

In a year or so, Iyer got a big break in her career. She was commissioned to assist Kotak Mahindra Capital with a software platform since she understood coding and markets. A few months down the line, she got an offer from the fast-growing financial conglomerate. “They made me an offer saying they are launching a mutual fund. I jumped in because there was so much to learn. This was a game changer,” Iyer says. 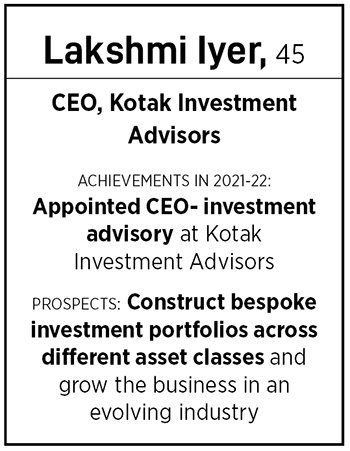 In 1999, Iyer joined the Kotak Mahindra group as its thirty-fourth employee. Sandesh Kirkire, former CEO, Kotak AMC, remembers hiring Iyer and her steady rise in the organisation as Kotak scaled operations. “Lakshmi was very hardworking and always focussed on learning. She was well-networked and had a lot of self-drive and self-initiative,” says Kirkire.

Iyer started off as a research analyst tracking bonds and money markets. “I tasted success and got the confidence that I was at the right place doing something I loved,” she says. “Then it was just like Kaun Banega Crorepati’s first level, second level, and so on. I climbed the ladder to the best of my ability,” says Iyer.

About five years later, Iyer got the opportunity to manage a debt fund. “The bond market at that time was not very developed. Explaining debt funds to fixed deposit investors was tough. But it was a moment of reckoning when I realised there was so much to do in this space,” Iyer says.

It was not a bed of roses. “As a fund manager you need to be on a daily treadmill of performance. You are [only] as good as your last performance,” Iyer explains. Being a woman in a male-dominated industry presented its own set of challenges. Iyer talks about her initial struggles of coping with what she calls the “minority complex”.

“Whether it is in the boardroom, or a presentation, or going to do a pitch, there is always this tendency of questioning yourself and wondering if you are doing things right,” Iyer elaborates.

At most points of her career, Iyer had to adopt a DIY approach, learning things as she went along. “This was an era where there was no induction or mentor-mentee relation. There was no LinkedIn or Twitter. The kind of access you have to people or information was not so easily available back then,” Iyer rues.

Nearly 23 three years later, Iyer took over as the chief executive of Kotak’s investment advisory business in November. Prior to this, she was the chief investment officer and head of fixed income products at Kotak Mahindra AMC. “I think I am as energised as I was 20 years back to take on this new challenge,” Iyer says.

And, what is Iyer’s advice for women trying to make a mark in their professional careers? “You need to be high on self-belief and energy to continue doing what you are doing. I feel very happy and content that I did not give up. There will be lots of trick-or-treat moments, where you are more likely to be tricked than treated. But you have to keep traversing those journeys to try and come out stronger each time,” she says.