Madhabi Puri Buch, the first woman at the helm of Sebi, the markets regulator, has brought in a data-driven approach 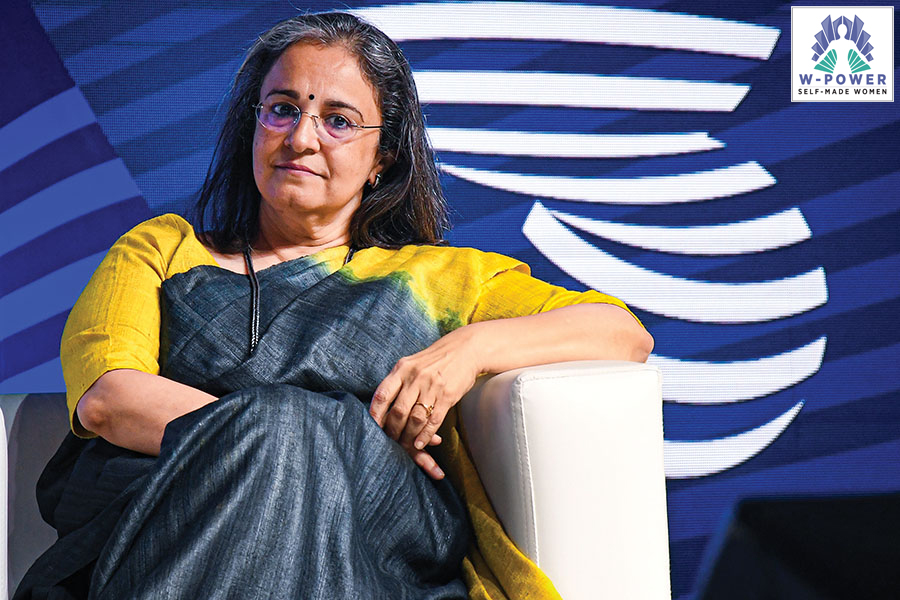 Unlike her predecessors, Madhabi Puri Buch, 56, hit the ground running. Appointed in March, Buch, the first woman to head the Securities and Exchange Board of India (Sebi), had already spent four years in the system as whole-time member. As a result, she knew the workings of the market regulator and spent no time settling down.

Those who’ve interacted with her say she is quick to come to a conclusion. “She’s [also] very data-driven and is open to changing her mind only if the data supports it,” says Anil Chaudhury, partner at Finsec Law Advisors, a financial services regulatory practice firm. This makes it worthwhile for various stakeholders from the ecosystem to present their views.

It was during her time that the total expense ratio of mutual funds was reduced in 2018—a conclusion that Sebi reached only after studying data and listening to the views of the industry. Expense ratios were introduced in 1996 and as the industry grew over the next two decades there was a view that these should be reduced. The decision was taken after data was studied and Sebi came out with a tiered expense ratio depending on the size of the fund. As a result, small schemes that have asset under management (AUM) of sub-₹500 crore can have an expense ratio up to 2.25 percent but for large schemes of over ₹50,000 crore the ratio comes down to 1.05 percent. The gains for long-term investors will prove to be immense. 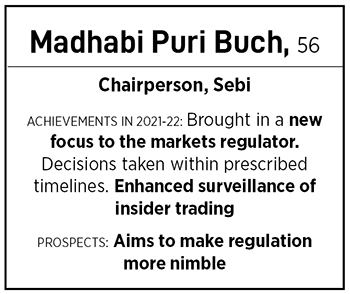 Her years in the private sector—at ICICI and later as founder at Agora Advisory—have allowed her to instill a work culture at Sebi that is goal-oriented. Insiders say that it is not unusual for them to reply to emails on Sunday and plan for the week ahead. She’s also worked to bring in top-notch talent. Case in point: Ananth Narayan, an ex-banker at Standard Chartered who heads the market intermediaries regulation and supervision department.

Still, Sebi has its job cut out and Buch’s public statements are carefully calibrated to deliver that message. A couple of months into her tenure the insider trading scandal at Axis Mutual Fund, where two fund managers were allegedly involved in front running, shook confidence in the system. While the case was still under adjudication in October, Buch acknowledged that there was work to be done on this front.

She has said that earlier front running was restricted to the spouse’s account but now moved to the mother, mother-in-law’s and brother-in-law’s account. “Now with WhatsApp and vanishing messages on WhatsApp, it is a problem. Regulation will be one step behind technology, but hopefully not too many steps behind. The idea is to make such violations harder,” she said at a public event. Work on algorithms to detect such violations has begun. Algos can now detect whether the leaks are at the mutual funds’ end or the brokers’ end. “If the trades of the same mutual funds are being front-run, then obviously the leak is at the mutual fund, and if the trades of multiple mutual funds are being front-run, then the leak is at brokers’ end,” Buch explained.

Participants hope that Buch’s tenure sees an attempt to make regulations more forward-looking. For instance, the regulatory sandbox launched by Sebi in 2020 has seen applications for newer fangled financial products like fractional ownership of shares or real time NAVs or withdrawal of mutual fund money instantly or the development of a stock market fantasy game. All these have been either withdrawn or rejected and the sense is that the regulator is not too comfortable in pushing the envelope. A bolder regulator should see more experimentation on this front as well.