Forbes India 2022 Rewind: Top 10 stories you loved the most 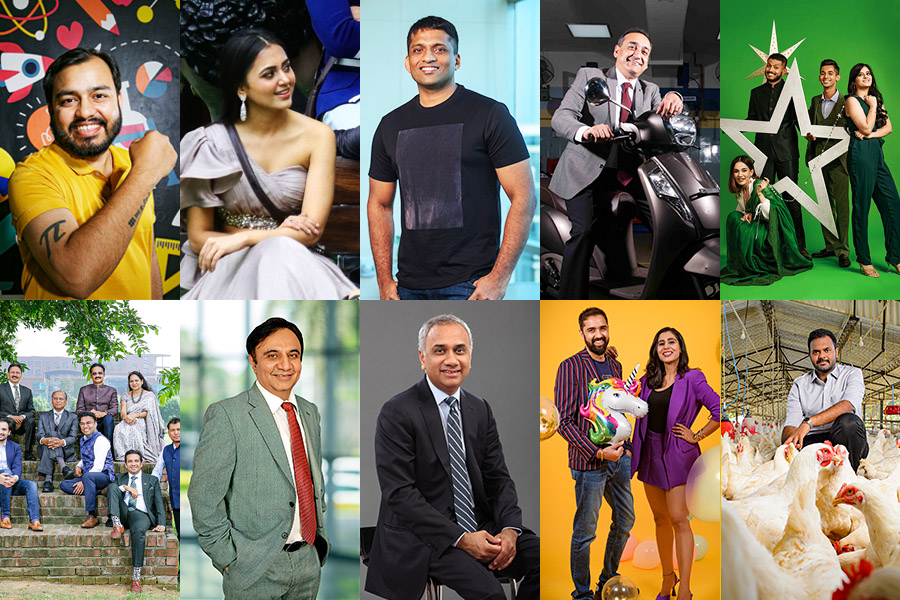 From physics to poultry, our most-read stories of 2022 are a colourful bunch

Forbes India’s top 10 most-read stories are a mixed bag. From the rise of an edtech unicorn to the analysis of Big 4 Indian IT CEOs' salaries, check out the full list:
1. Work, Force, Energy & PhysicsWallah: Meet 'Robinhood' Pandey, and his freshly minted edtech unicorn | By Rajiv Singh

Before it became a web series on Amazon's Mini TV feature on their shopping app, Alakh Pandey aka PhysicsWallah's origin story was captured by Rajiv Singh in June this year. Pandey's first teaching gig came when he was in eighth grade. By the time he reached Softways Coaching Institute in 2014 to teach physics to a class of 40 students, he was already a college dropout and only drawing a salary of Rs 5,000 by coaching in the evening. Pandey's first step to becoming one of the favourite physics teachers in India was taken with these words in that institute's classroom: Ye daayan nahin dyne hai (This is not a witch, but Dyne). This take on the unit of force earned laughs and applause. And Pandey's animated, approachable, and engaging style of teaching earned him an IIT and medical entrance coaching empire. Here's a riveting chronicle of Pandey's journey to making PhysicsWallah a unicorn. Read more2. Storyboard18 - Is Tejasswi Prakash the new addition to celebrity brands created by Bigg Boss? | By Tasmayee Laha Roy

Many find reality TV extremely easy to dismiss—be it the Kardashian-Jenner clan in the US or celebrities trapped in the house of Bigg Boss in India. This is underestimating the power of storytelling. The curated chaos of Bigg Boss has a massive fan following. The sixteenth season of the reality show is still reaching the top of the trends on social media and hijacking conversations on WhatsApp groups. This reality show has served as a rejuvenation lifeline for many celebrities who were either forgotten (for example season 1 winner and actor Rahul Roy) or require an image booster (for example Shilpa Shetty when she joined the fifth edition of Celebrity Big Brother in the UK). This Storyboard18 article explores how the fifteenth season of Bigg Boss changed the career of winner Tejasswi Prakash. Read more3. Full text of Byju Raveendran's letter to staff: Not all sunshine and rainbows, but we have grown in every dimension

Films have a strange impact on our lives. It is easy to understand a motive, an instruction, or a summary if its analogy is presented with a famous dialogue. Byju Raveendran, founder and CEO of edtech giant BYJU's did the same when he wrote an email to 50,000 employees in September this year, right after the company revealed FY21 financials. If you understand Rocky Balboa's allusions to the lack of 'all sunshine and rainbows,' you will understand what Raveendran was trying to say when he borrowed the line from Sylvester Stallone's character: All is not well, but we are holding on and marching ahead. The company was under public scrutiny for miss-selling courses to parents, losses, layoffs and a toxic work culture when Raveendran decided to write to 'BYJUites'. The text of the letter is one of the most-read articles on Forbes India this year. Take a look.4. In full throttle: How 'kam peeta hai' propelled Suzuki Access 125 to number 2 in the pecking order | By Rajiv Singh

“More power was perceived as more fuel, and higher cost of ownership,” rued Devashish Handa, vice president (sales, marketing and after-sales) at Suzuki Motorcycle India when he spoke with Rajiv Singh in September this year. It was the answer to the question of why Access 125 was still hunting for a place in the top-selling scooters club for almost a decade. Suzuki created a segment solely for 125 cc scooters in 2007 and still had stunted growth in 2017—even upgrades in styling, looks, features and rider ergonomics did not bring consumers. An appeal to the Indian mindset was the missing piece of the puzzle here. The brand rolled out a sharper brand positioning—kam peeta hai (it consumes less fuel). And that led to the story of how Suzuki Access 125 became the second-biggest scooter brand in India. Read more

Social media influencers have penetrated Indian lives unlike anyone before. Industry reports say that Indians spend an average of 2 hours and 36 minutes a day on social media platforms. This time is solely dedicated to influencers. Be it watching travelogues on YouTube created by the likes of Nikhil Sharma aka Mumbiker Nikhil or following Natasha Noel for practising better living and a healthy lifestyle, social media users are being influenced, just that some are playing the game better than others. To recognise this power, the strategies content creators use, the businesses they have built, and the stardom they have achieved, Forbes India and INCA, GroupM’s brand-safe influencer and content marketing solution, identified the top 100 digital creators, across nine categories to create the first ever India's digital stars list. Here's how our first India's Top 100 Digital Stars list was created. Read moreRead the complete package hereCheck out the list hereAlso read: Forbes India Rewind 2022: Our most loved podcasts of the year

6. From sweets to a university, Punjab's Lovely Group is far from done | By Mansvini Kaushik

From sweets to education to a jump into the EV play, Punjab’s Lovely Group, a 60-year-old family-run business, is achieving success in all three verticals. What started as a small sweets shop in Jalandhar, Punjab is today a group that owns 10 sweet stores, 25 auto stores, and a large university, enrolling 35,000 students. The family’s latest bet is in the real estate business. Having bought a large portion of land in and around Jalandhar, the Lovely Group, which is always on the prowl for the next big opportunity, is now constructing housing properties across the city. Hailing from Jalandhar, Forbes India’s Mansvini Kaushik wrote this story for the Regional Goliaths issue of the magazine, which appeared with some flavorful images of all the businesses that the Lovely Group has delved into—sweets shop, auto showroom, and their university. Read more

7. How Sandeep Bakhshi has quietly but firmly turned around ICICI Bank | By Salil Panchal and Neha Bothra

India’s second-largest private sector lender by assets, the ICICI bank, is being seen as the leader of the pack of India’s banks. Over the past three to four years, it has registered impressive profit and margin growth, as asset quality has improved and strengthened its liability franchise by growing deposits. For the Forbes India Leadership Awards 2021-22, the ICICI bank won the category of the best company in the private sector. Forbes India’s Salil Panchal and Neha Bothra’s story for the ‘FILA’ issue follows the stint of Sandeep Bakshi, who led the bank from late 2018 onwards while keeping a low profile through a turbulent phase and turning in a highly effective performance. His simple mantras, which are well-accepted banking principles, have been executed perfectly by ICICI's executives—and the CEO has succeeded in nearly erasing memories of a troubled legacy while making it poised to be a benchmark for other banks. Read moreRead the complete package here

You’d be surprised to read that the CEOs of four of India’s largest IT services firms—Infosys, TCS, Wipro and Tech Mahindra—earn a salary of about 200-1000x the salary of an average employee. Forbes India’s Samar Srivastava analyzed the compensations of CEOs of large IT and non-IT sector companies in India, and the findings were shocking. On the one hand, CEOs of the above-mentioned four companies earn a lump sum, on the other, the disparity in other large companies like Hindustan Unilever, Maruti, Bharti Airtel, and InterGlobe Aviation is even more stark. In the analysis, Maruti Suzuki stood out as it does not have any ESOP programme and the ratio of the average compensation between the CEO and the average employee ranges between 31 to 46 times. Read more

9. Varun and Ghazal Alagh's Mamaearth empire is built on the foundation of frugality | By Rajiv Singh

From some years of consecutive losses to trying ways to capture the market to raise funds and finally becoming a profitable unicorn, Mamaearth, the D2C skincare and beauty brand, has seen quite a journey. Started as a brand for baby care products by Varun and Ghazal Alagh in 2016, the company was able to achieve a valuation of $1.2 billion. Apart from strong backing from big names such as Sequoia Capital and Fireside Ventures, the couple managed to cash in some out-of-the-box, and sometimes frugal, ideas to attract customers and become a go-to name in the cosmetics industry in the country. Today, Mamaearth has morphed into a beauty and skincare Goliath that has bought three companies and has built its army of brands over the last two years. The story appeared in the ‘Profitable Unicorns’ issue of Forbes India. Read more

In 1984, brothers B Soundararajan and GB Sundararajan set out to change the poultry farming industry in India and make a mark for their brand Suguna Foods. With an investment of just Rs 5000, Suguna Foods brought to the fore many innovative ideas for procuring and selling poultry, one of them being contract farming. Today, they work with over 40,000 farmers from more than 15,000 villages across 18 states. And have become a Goliath, clocking in a turnover of Rs 9,155 crore in FY21. The company has a pan-India and international presence and focuses on four verticals: Farms and feed as B2B, and food and soya as B2C. The story appeared in the ‘Regional Goliaths’ issue of Forbes India magazine. Read more

Tweets by @forbesindia
From Djokovic's bugs, to Federer's snubs: Six sports offbeat stories in 2022
Not much to show with scooters, Piaggio wants to win over the three-wheeler market