In full throttle: How 'kam peeta hai' propelled Suzuki Access 125 to number 2 in the pecking order

From a distant Number 5 in 2015, Suzuki Access 125 toppled TVS Jupiter to become the second-biggest scooter brand in India. Can it now take the crown from the formidable Honda Activa? 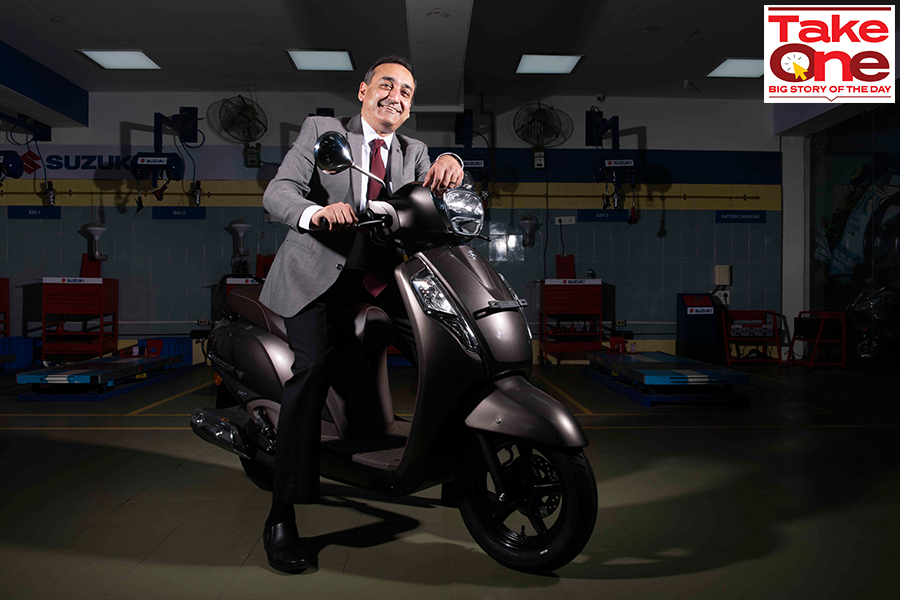 In September 2007, the Japanese baby was born in India with a definite name: Access 125. The name, interestingly, was not only self-explanatory, but also outlined the game that the newborn gearless scooter was about to play. Access 125 was the first scooter in the 125 cc segment, a category that Suzuki Motorcycle India created. While the wholly-owned arm of the Japanese Suzuki Motor was way ahead of time—scooter market in India was, and is still, dominated by 110 cc—Suzuki knew that the premature baby had a good chance of turning into a teen sensation if it mastered the right game.For close to a decade, Access 125 stayed in the hunt. What was missing, though, was a sharp strategy to win the game. The stunted growth was largely due to the erroneous perception that a scooter with a stronger engine would consume more fuel. “More power was perceived as more fuel, and higher cost of ownership,” rues Devashish Handa, vice president (sales, marketing and after sales) at Suzuki Motorcycle India. Consumers largely stayed apprehensive, and there was no easy acceptance. In FY16, while the Japanese counterpart Honda had a thumping grip over the scooter market with Activa—over 24.66 lakh—the second in the pecking order was TVS Jupiter with 5.37 lakh, followed by Hero Maestro Edge and Hero Duet with 4.98 lakh and 2.14 lakh, respectively. Access 125, in contrast, was a distant number five—1.76 lakh (see box). 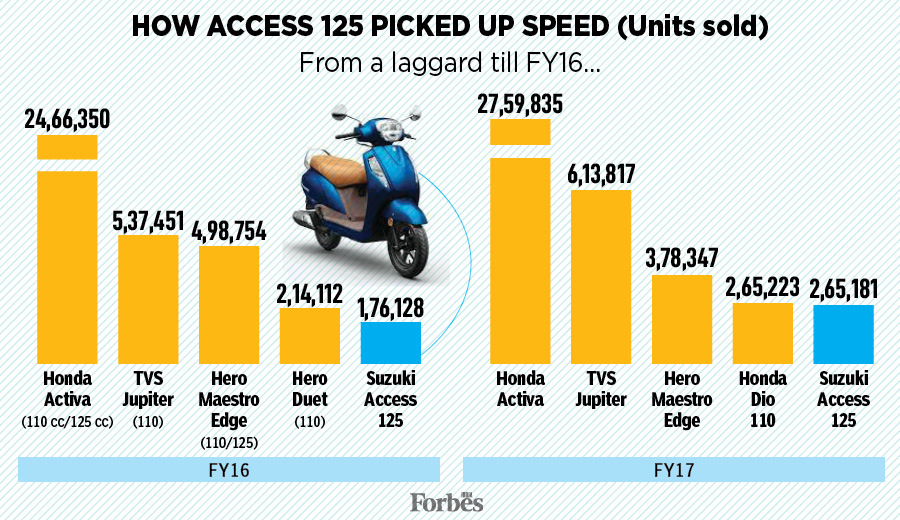 Meanwhile, in the same year, Access 125 switched into a celebratory mode. The next year, it was turning 10, and Suzuki decided to prepare for the birthday blast by loading the young one with cool features: A more powerful engine, quicker acceleration and a higher fuel efficiency which was a few notches above what it was born with. “It was reengineered. There was a major upgradation from frame to the engine,” says Handa. The scooter was spruced up in styling, looks, features and rider ergonomics. The idea was to make it more appealing to the consumers. Finally, the value proposition that a potential scooter buyer looks at from the lens of a family scooter, stresses Handa, fell in place.

The move worked. In FY17, Access 125 grew at a furious pace: From 1.76 lakh to 2.65 lakh. But something was still missing. Suzuki accepted a steeper uptick. The old ghost came back to haunt. A new engine with higher acceleration was again widely perceived to be a drag on the mileage. This time, though, Suzuki decided to swiftly exorcise the ghost. The brand rolled out a sharper brand positioning—kam peeta hai (it consumes less fuel). “We wanted to reinforce that while performance stays intact, fuel efficiency is significantly superior,” says Handa. The new brand positioning, interestingly, was also born out of consumer insight. Handa explains. The scooterisation of the two-wheeler industry has gone hand-in-hand with the pace of urbanisation. Though consumers in urban India felt the urge to upgrade from 100 cc to 125 cc, what inhibited a smooth transition was the notion of Access 125 not being a family scooter due to the false perception around mileage. 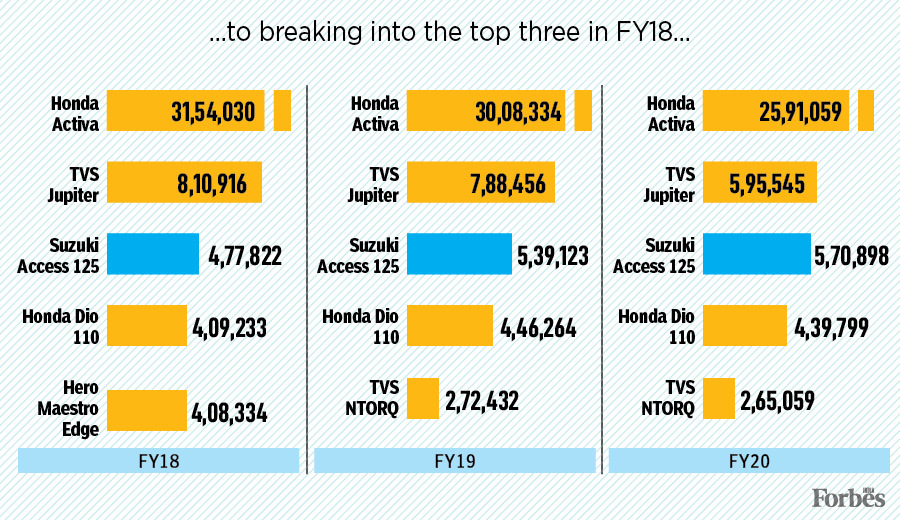 The irony, though, was that Access 125 was always a family scooter in terms of its consumer base. “It ranged from 18 to over 50 year old,” says Handa. The family product, though, needed to sell the Indian family the right story. For family use, Handa points out, fuel efficiency becomes a significant consideration. “This was a great insight for kam peeta hai,” he says.  The gambit paid off. In FY18, Access 125 leaped two slots to the third rank. In FY21, it pipped TVS Jupiter to become the second-biggest scooter brand in India. And in the first five months of FY22, the brand has managed to maintain its position. “It’s a decent Number 2, and ahead of TVS Jupiter which used to be significantly ahead for years,” says Handa. “That’s quite a journey for Access 125.”

For auto analysts, what has finally brought fame for Access 125 is the right name and playing the right game for over a decade. The brand not only created the category but also stayed invested. The patience was amply rewarded as consumers started upgrading to 125 cc over the last few years. “People got used to slightly more powerful engines, peppy performance and good on-board electronics,” says Jaspreet Singh Bajwa, management consultant (automotive industrial consulting group) at Nomura Research Institute. “They made an early bet on this segment, and the claims of being the most fuel efficient in 125 cc fuelled growth.”  What also helped was a simultaneous rise of a new generation of consumers who wanted more power and class. Core customers for the 125 cc segment, explains Bajwa, are the young office-going professionals and college students. “They look for extra power and performance,” he adds. Access 125 cc had all the answers.

For marketing experts, though, the success of Access 125 lies in its crispy brand positioning. In order to simplify decision-making in a complex world, buyers apply simple mental short-cuts and narrow in only on one attribute that matters the most to them, reckons Jessie Paul, chief executive officer of Paul Writer. While TVS Jupiter chose the marketing route of highlighting all its good features—easy fuelling with external cap, mileage, digital dashboard and threw in Amitabh Bachchan for good measure—Access put 125 in its name to highlight its engine capacity. “In marketing, it focussed on only one attribute—mileage. Kam peeta hai conveyed the message,” she adds.Paul explains why a silver bullet wins over multiple bullets. Mileage matters a lot in India, and by making it the talking point, Access got into the consideration set of consumers. Interestingly, for the two-wheeler maker, there was a precedent from the Suzuki family. In 2013, Maruti Suzuki, the biggest carmaker in India, positioned itself as the most fuel-efficient in the country with “kitna deti hai” campaign. “So Suzuki had a heritage to build on,” says Paul. At times, highlighting all benefits without identifying a single position that matters to customers can end up confusing them. Access 125 found its sweet spot and positioning in mileage. 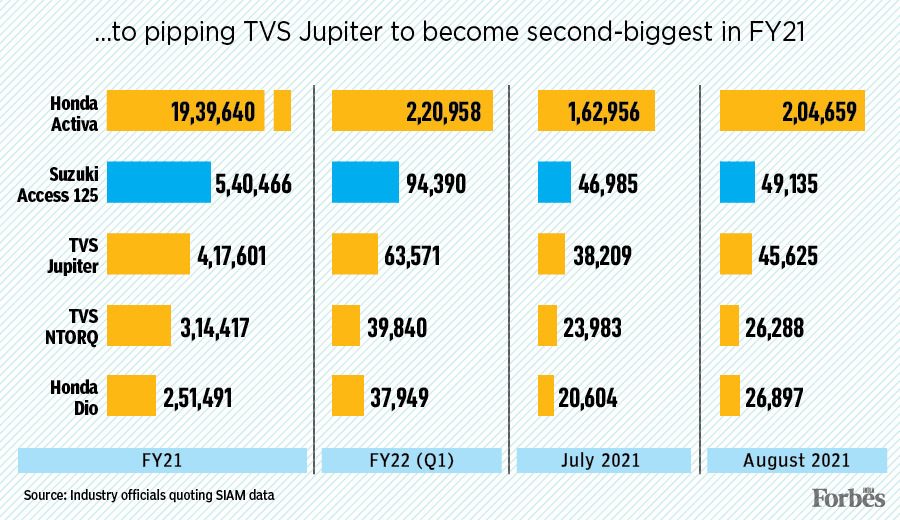 The going, though, might not be easy for a bunch of reasons. The biggest being the overwhelming domination of Honda Activa. The gap between the leader and the runner-up makes Access 125 a distant second—19.39 lakh versus 5.4 lakh in FY21. Dethroning the leader will take time, and won’t be easy.Handa, for his part, is aware of the big ask. “I will be honest, there is a large gap between the top player and us,” he acknowledges. “We would like to consolidate our position and take one step at a time.”

The second big challenge is not from any rival but the evolving two-wheeler landscape. With the central and state governments consistently doling out incentives for electric vehicles makers and consumers, original equipment manufacturers are fast moving towards EVs (electric vehicles). Handa, though, prefers to play a wait-and-watch game. There are still a lot of grey areas in terms of infrastructure. “Charging infra has to first prove out as a business model for the people who are setting up,” he says. The company, he underlines, doesn’t have any plans to roll out EVs this year. 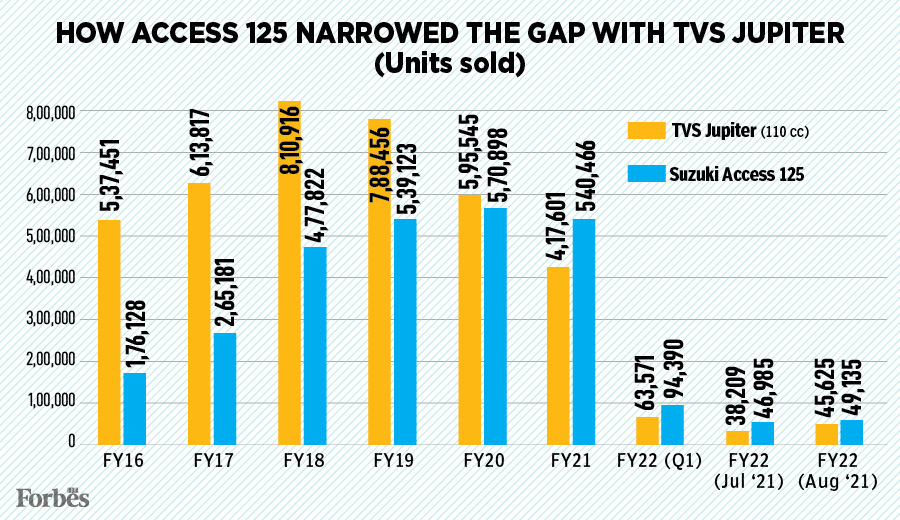 EVs, reckon industry watchers, will turn out to be the biggest challenge not only for Access 125 but all petrol scooter makers. And the chances are high that the teen—Access 125 is 14 years old—might have to brace up for an electric life, and fight, much before it turns an adult. A bunch of Indian players have a headstart in rolling out EVs, and Suzuki’s first-mover advantage in 125 cc would come to a nought. While kam peeta hai worked brilliantly in a petrol-driven world, the electric world would revolve around mileage, charging power and stability. And whenever all players turn electric, consumers might go back to kitna deti hai!

Tweets by @forbes_india
Search visually on Google; Amazon launches Astro; and a chat with Kris Nair of Kawa Space
Sparkles, lingerie, disco: Fashion gets back into party mode