Love letters and tax returns: Bolivia's sidewalk scribes and their typewriters do not distinguish

In Bolivia, much administrative paperwork is unavailable online and must instead be submitted in typed form. Therefore typing serves as the means to earn bread for the day 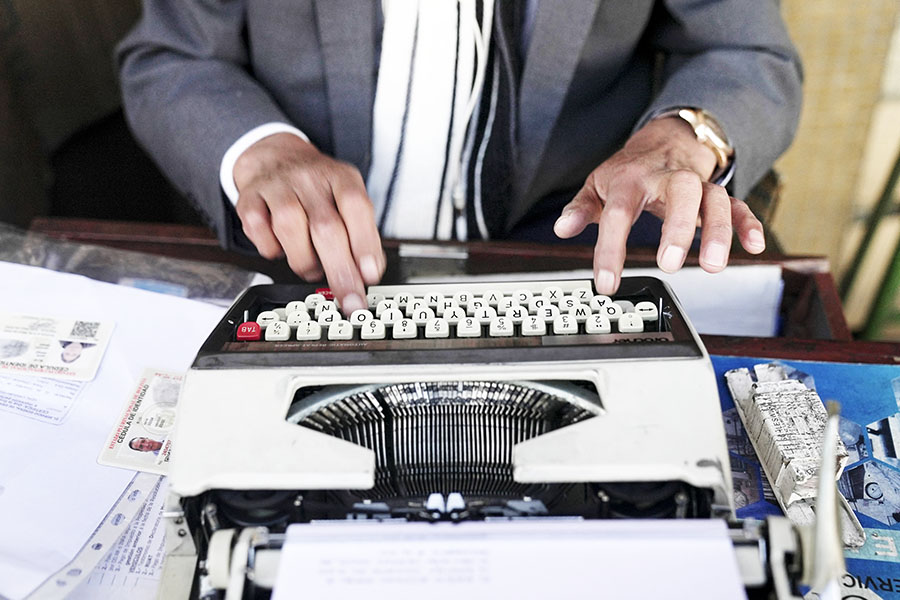 In Bolivia, much administrative paperwork is unavailable online and must instead be submitted in typed form

Dressed in a suit, a feather in his hat, Rogelio Condori sits bent over a small table on a sidewalk in La Paz, tapping on a typewriter with his index fingers.
As clients line up by his desk, which is perched at an angle, 61-year-old Condori fills out a tax form here, a divorce application there, on his Brother Deluxe 1350 vintage typewriter in the Bolivian capital.
For a fee of up to seven bolivianos (about $1) per page, "we handle everything related to national taxes," he told AFP with obvious pride from behind a full-face plastic mask.
Condori and his colleagues also dole out what advice they can.
"We can't complain," he said of his livelihood, which covers "the bread of the day" in a poor country with a minimum monthly wage of about $320.

Condori competes with nine other typewriter scribes on the same street, but said he has regular clients.
In Bolivia, much administrative paperwork is unavailable online and must instead be submitted in typed form.
About 60 percent of Bolivians have internet access, but connections are often slow.
"I have not had good experiences with accountants and lawyers," said Lazario Cucho, a 56-year-old farmer who has used Condori's services.
"And on top of that, they charge a lot."

As the sun climbs in the sky, Condori opens an umbrella to cast some shade over his workspace.
He looks up from his work to see a couple, both grim-faced, who have come for help with a divorce form.
Another client wants him to fill out a bank loan application.
"Every now and then, we do love letters," Condori said, smiling amid the din of traffic and street vendors on the corner that has been his outdoor office for the last 37 years.
Once, a man approached him for help with a souring relationship.
"I wrote: 'My love... let our years together not be in vain. Please reconsider our situation'," Condori recounted the letter he composed for the man.
The man "sent the letter and came back a month later to say: 'Mr Rogelio, we have reconciled thanks to the love letter,'" the typist said.
Condori recently set up an office complete with internet and a computer, but he much prefers his "exciting" sidewalk perch.
"Typewriters are easier to use, and they are fast," he said.
At 3:00 pm, Condori packs his mobile desk onto a cart, which he pushes to a nearby warehouse where it will stay overnight.
"I think this typewriting thing will continue," said Condori of his craft.
"They will always come for love letters."