A night-time tour through the secrets of Grič

A man cloaked in black and a 19th century journalist reveal the medieval history of a town in Zagreb that experimented with democracy, fought Turks and invading Mongols, survived a fire, carried out witch hunts and suppressed peasant revolts 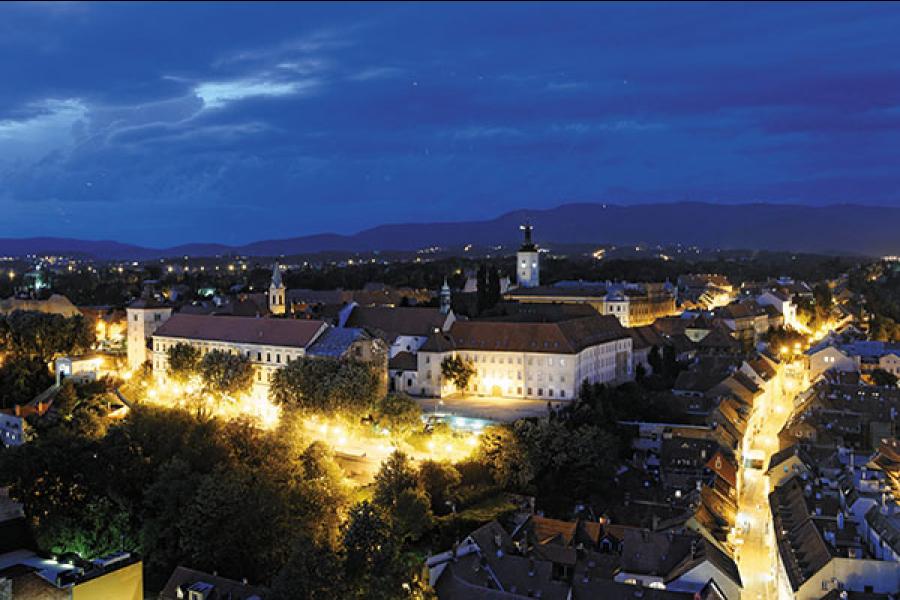 A  flyer, surreptitiously wedged between the cupboard doors in my hotel room at Zagreb, promises to take me back in time. A quick read reveals more cryptic clues: ‘Psst. Can you keep a secret? Show up on Saturday at 9 pm, at the crossing of Ilica and Mesnička Street, where a man in a black cloak will whisper to you the secrets of Grič.’ I’m not surprised. Anything is possible in the Croatian capital of Zagreb, which straddles old and new Europe, and epitomises a Balkan culture that appeals to jaded tourists.

The promised time travel experience is a nocturnal, theatrical tour of Grič (pronounced gri-ch), the medieval heart of Zagreb. In the 13th century, during the dreaded Mongol invasion of Europe, King Béla IV of Hungary and Croatia issued a charter, or the Golden Bull of 1242, declaring Grič to be a ‘free royal city’. This early experiment in self-governance, a rarity for its time, allowed the town to come into its own. Citizens elected magistrates and leaders, and built fortifications against future Mongol raids. Today, remnants of the medieval towers and walls that encircle the town stand witness to the tumultuous era. And the ‘Secrets of Grič’ tour draws on its medieval past, with a healthy dose of witches and lore.

I arrive at the assigned spot that night to find myself one of 25 people who couldn’t resist the flyer’s lure. At 9 pm on the dot, a man shrouded in black meets  us at the intersection of two charming cobbled stoned streets. “Follow me,” he says, leading us to a nearby narrow stairwell. (Note to readers: I do not follow strange men clad in black into unlit stairwells, but an internet search and a chat with my hotel’s front desk staff assured me that ‘Secrets of Grič’ is a reputed and well-known tour run by the Zagreb Tourist Board and an event management company, Katapult Promotion.) 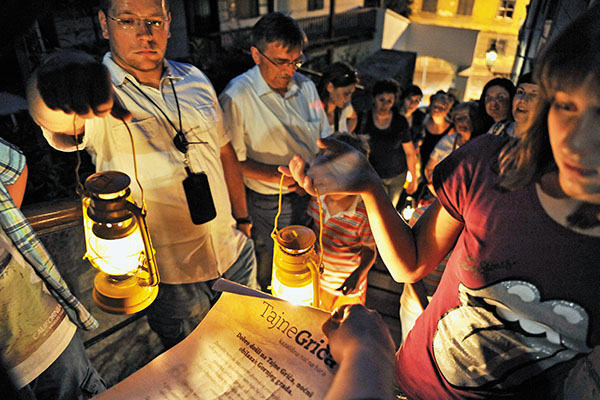 Image: Zagreb Tourism Board
Tourists gather with lanterns on the Capuchin Stairs for The Secrets Of Gric walk

Our guide is silhouetted against the light from his lantern. With practised flair, he says in a booming voice, “We stand at the foot of the Capuchin Stairs, the oldest entrance to Grič or Gradec.” Setting aside his lantern, he tells us in a more natural voice that Zagreb grew out of two hills, Gradec and Kaptol.

He slips back into character, and his voice echoes through the dimly lit cobblestone streets. “At the top of these stairs, Croatia’s first woman journalist Marija Jurić Zagorka, born in Zagreb, awaits your arrival. Had she been alive, she would have been over a hundred years old.”

Zagorka—that’s her pen-name—was one of Croatia’s most famous journalists and novelists. Born in 1873, she started her career at a now defunct newspaper called the Obzor (Horizon), and found her niche in reporting on politically sensitive topics. Despite opposition from the male publisher of the paper, she became the newspaper’s editor-in-chief in 1903. In 1910, she started writing romance novels with strong female protagonists. Her plots were often set against the haunting backdrop of Grič. 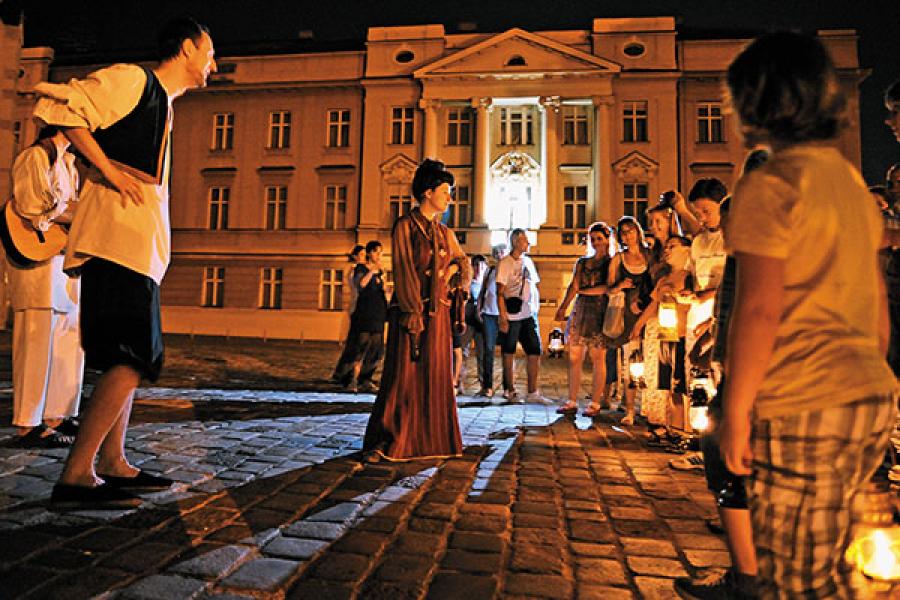 Image: Zagreb Tourism Board
An actor dressed as the legendary journalist Zagorka joins the walk

In what I’ve come to identify as Zagrebian quirkiness, the tour appropriates the famous journalist to become Grič’s spokesperson. Clad in a taffeta gown and a lace embroidered hat, the actress playing Zagorka stands atop the Capuchin Stairs. Behind her is the imposing Lotrščak Tower, a fortified white stone edifice mounted by a bell, which overlooks the south side of the city. “In Grič, the tower was used to spot advancing armies. During the Middle Ages, much of Eastern Europe lay ravaged by Mongol invasions, followed by the Turkish [Ottoman] invasions of the 15th century. The Turks had captured large chunks of northwest Croatia, but despite reaching the banks of the [nearby] Sava River, they never managed to stake claim on Grič,” says Zagorka.

This history lesson meanders into folklore. I’m told that when the Turks “with malice in their hearts” were camping across the Sava River, the cannon atop Lotrščak malfunctioned. It blew away a cooked rooster on a platter, which happened to be a Pasha’s lunch. Fearing the quality of marksmen in the town, the Turks immediately retreated.

The tour moves on to the oldest pharmacy in Zagreb; built in the mid-1300s, it remains operational to this day. Above the entrance, a wrought-iron crest bears an eagle with an inscription, ‘K Crnom Orlo’, which roughly translates to ‘The Black Eagle’. With its display of lotions in quaint porcelain bottles, the store’s window dressing seems frozen in time. Inside the pharmacy, though, the potions are replaced by packaged pills, and dusty vials give way to Vaseline and Viagra. It seems that Nicolo Alighieri, the Italian poet Dante Alighieri’s great-grandson, worked here as a pharmacist towards the end of the 14th century. On cue, an actor playing Nicolo greets us, and even suggests a remedy for a cough that’s plaguing a fellow tourist.

I exit the pharmacy, turn a corner and enter another long, narrow cobblestone street, flanked by buildings with red rooftops. Here, women in gowns and men in top-hats play furtive lovers beneath oil lamps that are lit manually twice a day. Zagorka draws our attention to these remnants of a different time.

Without any warning, the mood shifts, and screams pierce the night as we watch a fire engulf the town. With 3D backdrops and a fantastic play of spotlights, the tour recreates one of the worst disasters to have hit Grič. Actors covered in soot cry for help as the tour group, caught in the moment, watches helplessly. With a tear-streaked face, Zagorka explains that the Great Fire of 1731 ravaged parts of the town. But miraculously, from the ashes emerged an untouched painting of the Virgin Mary.
The fire and the painting altered Grič’s history. The Catholic church, stripped of its power by the Golden Bull, once again asserted itself over the city. Zagorka claims that the painting of Virgin Mary that graces the Stone Gate, the only medieval entrance to the town—there were once four gates—to have survived the fire, is the very same one. 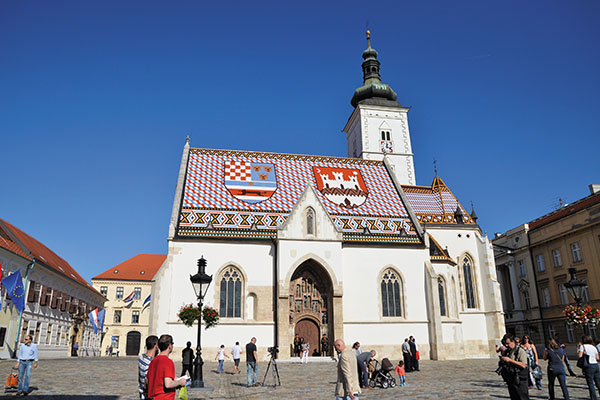 A few feet ahead, another dramatic scene unfolds: A witch hunt, a common occurrence in 18th century Europe. As a woman is about to be burned at the stake, a shrill voice passes judgement: “Be done with her now”. The people who have gathered for the burning avert their eyes in superstition. Some join their hands in prayer. But before the flames engulf the witch, a knight in shining armour gallops through the crowds on his steed, grabs the woman and rides off into the night. Zagorka lets the suspense play out. “To find out if their love story ends happily, read the Witch of Grič, a series of seven gripping novels, written by me. The books will take you through the great witch hunt of the 18th century, when taboos and superstitions prevailed, but a few brave men and women knew better,” she says.

Like a seasoned time traveller, Zagorka takes us to the year 1573 to meet Matija Gubec, the leader of the Croatian peasant revolt. The Golden Bull may have negated the power of the royalty, but class distinctions were inherent in Grič society. Gubec, a peasant, governed a band of revolutionaries who protested the cruel treatment of serfs by the nobility. The revolt was crushed in 12 days with the beheading of Gubec at St Mark’s Square. 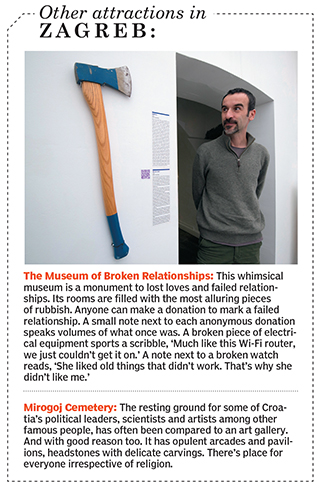 A distraught Gubec sits in the middle of the square dominated by St Mark’s Church, which dates back to the 13th century. It is one of Croatia’s oldest churches. A colourful tiled roof sits atop a largely Romanesque structure, interspersed with Gothic portals that bear key Biblical figures including those of Mother Mary and the infant Jesus. Before he is beheaded, the actor playing Gubec utters the revolutionary leader’s last words, “A time will come when my eyes will look down on a free and happy Croatian people.”

We get to meet other famous townsfolk including Miroslav Krleža, a 19th century Croatian bard who joins the tour to intellectually spar with Zagorka, and a former countess who seems oblivious to our lowly presence.

The hour-and-a-half-long tour comes to an end, and the cast and crew emerge to take a bow. As I share rakia (brandy) and sweets with Grič’s inhabitants, it’s not difficult to forget for a brief second that I’m in the 21st century. Medieval Croatia battled Turks and Mongols, superstition and class conflict. And its modern history is no less turbulent. It was only in 1996 that the country became a member of the Council of Europe after it broke away from Yugoslavia. Perhaps now, after all these centuries, peasant revolutionary Matija Gubec is smiling down on a free and happy Croatian people.

Tweets by @forbesindia
Kiran Mazumdar-Shaw: Not just make but also innovate in India
Once Upon a Time in Venice