Nothing quite beats getting close to all the action 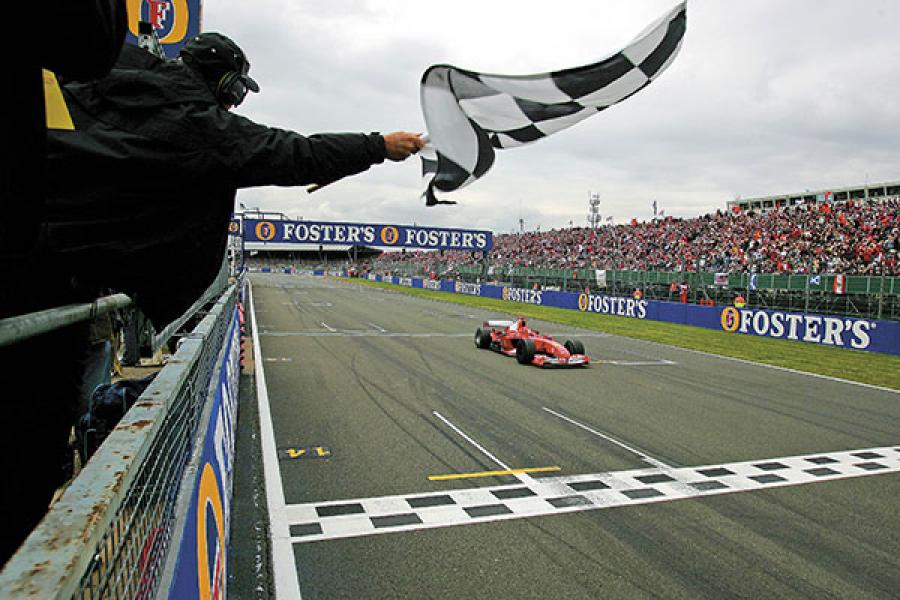 Image: Corbis
The racing track at Silverstone in the UK, built on a disused Royal Air Force airfield, is one of the fastest in the circuit. The British Grand Prix in 2004 saw Ferrari’s Michael Schumacher registering his 80th win

You haven’t seen fast and furious till you have actually been to a Formula One (F1) race. It is tailor-made for the lifestyles of the rich and famous.

I had a boyfriend who was hooked on to the sport, and because it was more appealing than cricket, I allowed myself to get drawn into this world. It helped that the driver I was rooting for won the Formula One World Championship. The year was 1997 and Jacques Villeneuve became the rare Canadian to take the title. What made his win even more poignant was his victory at the Belgian Grand Prix (GP) that year. The son of legendary race car driver Gilles Villeneuve, Jacques was only 11 when his father died after a crash in the 1982 Belgian GP. When the son stood triumphant on the same podium 15 years later, I couldn’t stop the tears. These are stories, this mystique, that makes F1 more than just a car race.

When I went to São Paulo, Brazil, for its fashion week in 2009, I cut down on shows to be able to visit the monument built in honour of racing driver Ayrton Senna, who died in an accident in the 1994 San Marino Grand Prix. Installed at the entrance of the tunnel under Ibirapuera Park, São Paulo, it is a stylised interpretation of an F1 car conceived by Brazilian artist Melinda Garcia.

I remember vividly when my love for the sport was clinched: It was after I received an invitation by Foster’s Group to be their guest at the British GP in 2004. I never questioned why a fashion magazine was included. I just landed there post haste. I knew it would be an exciting race; the track at Silverstone is one of the fastest in the circuit. Like a lot of racing tracks in the UK, Silverstone was built on a disused Royal Air Force airfield. It saw its first race in 1948, but it was the 1951 race that was historic. That was the first F1 race not won by an Alfa Romeo. Instead, the more fuel-efficient Ferrari scored its first win.

The 2004 trip was all the more special because I had access to the Paddock Club. Essentially a VIP area, you can sip champagne through the day and chat with visiting F1 drivers. At some point before the race starts, you can even walk across to the pits where the cars are raring to go. (As an aside, they look smaller in real life.)

It was also a great opportunity to see British fashion, up close and personal. No one does sporty chic better than the Brits. It sounds ridiculously old-fashioned but, somehow, from their loafers to their well-tailored trousers, they get that loose, long-limbed elegance down pat. I am a huge fan of British fashion. During my first visit to London as an impressionable tween, I was introduced to the goth and punk subcultures. Fierce mohawks, crazy body piercings and black, tattered shrouds roamed the streets. It was all so edgy and cool. Brit fashion is about street cred: It straddles technological innovation and vintage at the same time. No wonder the poster child of Brit Cool is Kate Moss, cheeky and rebellious, all the time. 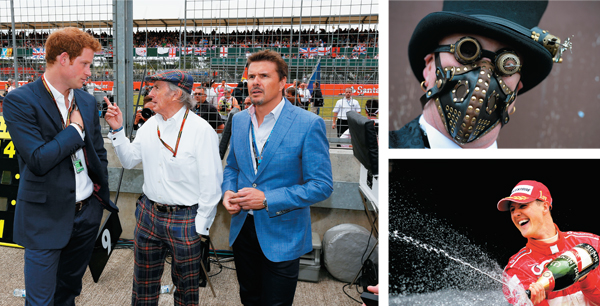 Image: British GP: Corbis: Reuters
Clockwise from top: Britain’s Prince Harry (extreme left) with F1 legend Sir Jackie Stewart (centre) and musician Mark Stewart at the 2004 British GP; Heath Waller during the Goth festival in Whitby, England, in 2013; a celebratory Michael Schumacher
What I did forget is a key lesson about British fashion—it is always determined by the weather. Which is why everyone is a stylist and an expert at layering. Like a good Mumbai girl I came dressed for summer, since it was July. Silly me. It was so cold I gladly accepted fashion’s greatest faux pas: The fleece jacket. (Of course, I still have it. Do you really expect me to throw away my F1 merchandise?) But the chill faded away, as we made our way to the stands.

Nothing beats the moment the race starts. So great is the noise of these cars shooting out like mini planes that you are literally jolted out of your seat. No one warns you about the noise, but perhaps the earplugs you are handed when you enter the stands are an indicator.

Every gear change sounds like gunshots. It’s noisy, but it is also silent. A result of the tension, I think. It leads to a particular tautness in the air. In this case, it was justified. With just 20 laps to go, Jarno Trulli (driving for Renault) had a spectacular crash, right in front of us. The car spun, hit the barrier and rolled over! Trulli was safe, but the car was in pieces. Till the safety car cleaned up all the debris, a lone tyre stood on the track, trembling as competitors hurtled past. It was a tough race with some incredible driving. Just three seconds separated the top three. And then the winners were on the podium, popping open bottles of champagne to celebrate.

It was a magical moment, made even more special by the fact that it was Michael Schumacher’s 80th win. It is one of life’s tragedies—and ironies—that the German racing driver is still recovering from a near-fatal head injury that he sustained during a skiing accident nearly two years ago. To my mind, however, he will remain the finest driver ever to race in F1. I saw enough evidence at Silverstone.

Tweets by @forbesindia
Beauty and the Beast: Coming soon to India
Jesper Sørensen: Why do entrepreneurs take the leap?