You Can't Buy an Olympic Medal

Steel magnate Lakshmi Mittal, who has set up the Mittal Champions Trust to nurture medal hopefuls, tells Forbes India that athletes have to position themselves for victory 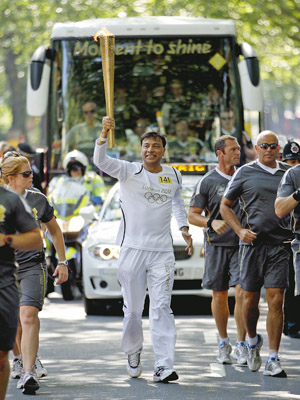 RALLYING ON Lakshmi Mittal on the final day of the Olympic torch relay in London on July 26, 2012. He has decided to extend the funding of his trust till Rio 2016

Chairman and CEO of ArcelorMittal, Lakshmi Mittal, set up the Mittal Champions Trust (MCT) with son-in-law Amit Bhatia, founder and senior partner of private equity fund Swordfish Investments. CFO of ArcelorMittal and Lakshmi Mittal’s son, Aditya, is a trustee of MCT along with Mahesh Bhupathi, former world number one tennis doubles player. Manisha Malhotra, who was part of the tennis team in the 2000 Sydney Olympics and also won mixed doubles silver in the 2002 Asian Games, is the CEO of the trust.

Q. What is the aim of the Mittal Champions Trust?
LM: To absolutely support individual sports. We have even decided to support for the next Olympics.

Q. How was the MCT born?
AM: My father was instrumental in establishing it. Eight years ago, we both were at the Games in Greece. The Indian team [put up a poor show with Rajyavardhan Singh Rathore winning the lone silver], so it was a big disappointment. We felt we needed to change that. That was when the trust was established. We saw a few medals in Beijing and it’s just continued.

Q. How much personal interest do you take?
AB: My father-in-law takes a lot of interest. In terms of who guides the trust and gives it its vision, that comes from my father-in-law, me and Aditya [who is also one of its trustees]. We try to give it its overall direction and shape. Manisha Malhotra runs the trust in India.

Q. How much money have you put into the MCT?
AB: When we first launched the trust, my father-in-law decided that we’ll invest $10 million in the corpus of the trust. Like any organisation, there were checks and balances; we were prudent in our ways.

We subsequently realised that to be able to run a sports initiative like this, having a set budget in mind is very difficult. If, all of a sudden, an athlete needs reconstructive surgery, it’s not something you can budget for.

We send our athletes to the same training centres that Tiger Woods or Kobe Bryant may train at. We send our athletes to all the best centres around the world. The boxers come to Bradford, the wrestlers go to Russia, Korea and Cuba. We realised very quickly that things were very expensive, especially as the number of athletes went up to 40. So the number of $10 million was thrown out of the window a long time ago.

Q. What was your thought trajectory?
AB: We decided that we were going to stick with the idea of best in class and that it was going to cost whatever it may. The other thing that changed was that we had decided we would fund the trust until London 2012; we are now going to fund it until Rio 2016.

Now, we just draw down on a need basis and the number changes from time to time. If an athlete requires major surgery, or major equipment changes, or lots of travel, that just shoots the budget.

Q. Can you buy a result in sport?
LM: No. You can’t buy an Olympic medal, but if you keep putting yourself in a position to win, your percentages will be better.

Q. What do you actually do with your chosen sportspersons?
AM: We create a programme for them depending on what the key requirements are. Usually, it’s a mixture of coaching as well as very specialised opportunities to train abroad or train with some specialists within the country.

Q. What have you observed about the passion that’s needed?
AB: It’s supposed to be the most central thing to a person’s life. Look at the dedication. It’s very hard to do a whole lot else if you’re going to train eight to 10 hours a day. If an athlete doesn’t want that kind of commitment, they’re not going to have success at the highest stage.

Q. What are the similarities between business and sport?
LM: No success can be gotten without perseverance and hard work. To be able to face problems and work through them are the keys to success in all walks of life.

Q. What strategies do you apply in the MCT that you use as the chairman and CEO of ArcelorMittal?
LM: It is important to be efficient in everything we do. So everyone must have targets that they are trying to achieve. 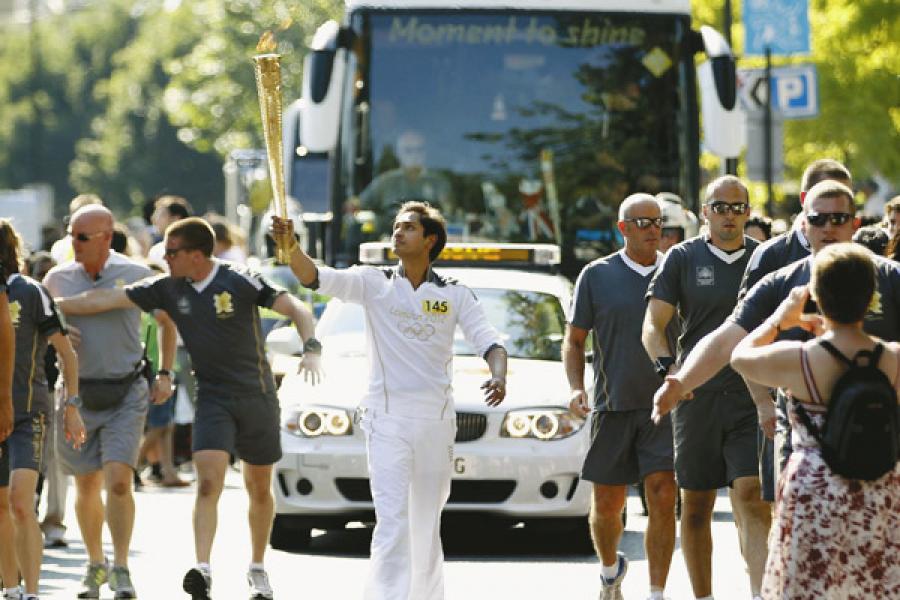 Image: Tom Shaw / Getty Images for Arcelor Mittal
SON SHINE Aditya Mittal, who is a trustee of the Mittal Champions Trust, at the torch relay in London
Q. There is no other person/body in India giving as much to Indian sport as you are. Aren’t you doing what the Indian government should be doing?
LM: Yes. But to fight the system is too tough, so it is more effective to supplement and plug the holes.

Q. Still, couldn’t the government be doing more?
AB: Everybody could be doing more. The government could do more because as a nation we’re not succeeding at the Games. The first couple of years were very difficult. They offered resistance. Slowly, as they understood that we’re a not-for-profit, we’re only trying to help people, we’re ready to work alongside, we’re willing to support them in their endeavours, they’ve changed.

If Mahesh Bhupathi had the chance to sit down with some of these decision-makers, he could teach them so much about how they could make more active, prudent and efficient decisions.

Q. What do Indian athletes need to do to get their performances to peak level?
LM: Training, training, all types of training. They need to have a great physique, a great mind, and they should understand technique. They have to have a look at world-class players and see how they get gold medals. You have to train yourselves with commitment and determination.

Q. Do Indian athletes need to spend more time abroad?
LM: Not necessarily, no. If we can provide good training in India, as we have done in the MCT, then other business houses can also do the same.

Q. Aren’t you still a lone voice, though?
LM: No, I think other business houses seem to be getting interested now. They’re talking about it. So if we succeed here, I’m sure more business houses will come on board.

Q. Who chooses the athletes that you develop?
AB: We’ve set up, with Manisha’s help, a great network of local experts, of former Indian sportspersons who have excelled in those fields. They tend to know about a lot of the young, up-and-coming athletes. They see them in domestic, local and national competitions and through that network they report back to the trust. Then we send scouts to watch them, and eventually sign them.

Q. How do families of limited means react to one of them doing sport full time?
AB:  The family may view it as one less breadwinner. In many cases, Manisha has gone and sat with the family and told them that they must take pride in their children’s accomplishments. We’ve also tried to mobilise local media to carry stories about their successes so that they, their families and the local community can feel proud. All these things will deter families from thinking that they’re wasting their time. We have, on occasions, provided some amount of financial support to athletes, and by extension, to their families.

Q. Would you like to subsidise the families?
LM: Maybe in the long term. We are still fledgling players in sport.

Q. What values do you hold that you instil at the MCT?
LM: Perseverance, the will to be the best, and striving for excellence.

Q. A non-sporty question. What are your plans for further investment in India?
AM: We remain interested in India. Clearly, we have projects in various states in the country. We remain frustrated with the slow progress that is occurring because of land acquisition issues, environmental clearances. Nevertheless, we remain focussed on achieving some sort of presence in steel and mining within the country.

Q. Aditya, you’re a second-generation Mittal based in London. How does India figure in your mindset?
AM: I still retain my Indian passport. So do my kids. That says it all.

Q. What difference has the MCT made?
LM: Sport is a unique discipline where a lot of factors put together have to culminate to be able to get results. You have to put yourself in the position for victory and then hope for results. The MCT has given its athletes the best training, and everything else they might need. It has prepared them in the best possible way to put them in a position to win medals.

Tweets by @forbes_india
Podcast: Guardians of the spirit of Independence
The Olympic Cauldron: From 204 to a Single Flame