What Makes Marwaris Thrive in Finance

A strong head for numbers and an instinct for trading have helped the Marwaris thrive in the financial industry, says Vimal Bhandari 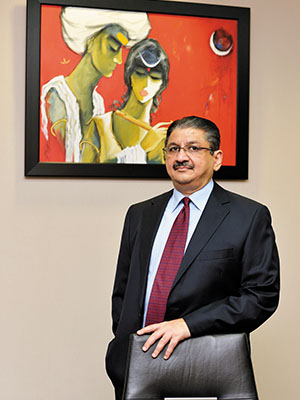 Vimal Bhandari, CEO and managing director of Indostar Capital Finance, a wholesale credit institution, has been a part of the Indian financial industry for over a quarter-century. Bhandari has headed the financial services business of IL&FS Ltd for close to 17 years; he was, later, country head of Dutch life insurance and pension company AEGON NV in India.

Needless to say, he is well-networked in the financial community. Consider that he is also a former member of the Listing Committee and Executive Committee at NSE. Bhandari continues to be an independent director on boards of several prominent companies including Piramal Glass, Bayer CropScience Ltd and Bharat Forge.

His perspective on Marwaris is bolstered by the fact that Bhandari has his roots in Rajasthan, which he still nurtures. He has worked closely with Marwari entrepreneurs, helping with their corporate finance requirements including takeovers, structured lending and fund-raising activities. Here are his views on the community’s dominance in the financial business:

Marwaris and Money
Marwaris usually have a very strong feel for numbers. They understand and can control them. That gives them an advantage in business over those who are not as adept. This ability is a function of our genetic pool as well as formative years, when one is able to benefit from exposure to the business ecosystem. It is probably similar for communities like the Chettiars, Gujaratis and Sindhis. All of them have a strong grasp on business—be it trading or manufacturing.

The Changing Face
Owners reach an inflexion point when they realise they need professionals and processes to take the business to the next level, either in the same vertical or by diversifying into other areas or new geographies. This change is not easy because owners are used to the control.

There are three primary models—family-owned and managed companies, like the Zee, Bangur and the JK groups, where the promoters are still very hands-on managers; family owned-but largely professionally managed such as the Aditya Birla, Sterlite and Essar groups, where the owners are more involved at the strategic level, while operations are handled by the empowered professionals; the third category is family-owned but entirely professionally managed, where the promoters are only strategic investors and the company has a dispersed shareholding, including internationally. Not too many companies in India have reached this stage.

The current stage of growth opportunities and the competitive environment requires a fair amount of entrepreneurial risk-taking. This is why many Indian businesses are substantially family-owned and managed. But this is likely to change as new opportunities emerge.

The Parta Way
The Birlas are commonly associated with following the parta system (broadly a system that indicates profit and loss on a daily basis—net to pocket, in a sense). Though it may no longer be fashionable, many of our businesses still have what I’d call an informal parta system, super-imposed with modern reporting. All true-blue businessmen know their matrices on the back of an envelope. And the most important information is always about cash flows.

Marwaris probably tend to focus on cash inputs more than others. This has cultural and social dimensions. The community has historically been in the money-lending business. They understand the power of knowing their cash flows. Many of the big bankers in the post-independence era were from Rajasthan—the Bangurs, the Birlas, for instance. They practiced tight financial rigour. The philosophy is clear—the cash you earn is the profit.

Parta is like a daily health check for any business. We use it to measure business efficiency. We teach it to our boys even after they return from overseas with fancy degrees.

Marwaris in the financial industry
The financial community in India largely started in three cities—Bombay (dominated by the Gujaratis), Calcutta (Marwaris) and Madras (Chettiars and Marwaris). These communities were involved in stock-broking and lending. Many of them moved on to start banks. The Birlas had UCO bank, for instance. After nationalisation, some of them started NBFCs (non-banking financial institutions). In the 1980s, when India’s capital markets exploded, many Marwari entrepreneurs could see how this would evolve and entered merchant banking. You had Enam Securities (promoted by Vallabh Bhansali), C Mackertich (Ajay Kayan) and Stewart & Co promoted by Utsav Parekh in eastern India.

In the next phase, many new entrepreneurs with a head for figures came on the scene. These were what we informally call ‘value investors’. They were stock pickers, managers of HNI money and investors—people like Rakesh Jhunjhunwala of Rare Enterprises, Radhakishan Damani and others.

The economic and business landscape changes almost every decade. And entrepreneurs have to re-adapt to it. Some new promoters from the community moved up to become integrated financial service providers: For example, Motilal Oswal, Anand Rathi, Emkay Global and Nirmal Jain of India Infoline. There are new players coming in continuously; among the most recent is AU Financiers from Jaipur. It is also no surprise that most of the applications to the RBI for new bank licences are from Marwari entrepreneurs.

The financial services community is strongly promoter-led. This is true not only of Marwari groups like Srei Finance, Bajaj Magma (which is into truck financing), but also of others like Yes Bank (Punjabis) and Kotak Mahindra Bank (Gujaratis).

This evolution will continue. Many are likely to move into agri-finance and warehousing-based financing as opportunities open up in commodities. At the core, though, it is about a strong trading instinct and a head for numbers.

Community support/funding
The Marwaris are an affluent community with good access to capital—social linkages allow them to dip into the eco-system. But, to the best of my knowledge, there is no formal community organisation that financially supports a Marwari entrepreneur. However, you can always find backers for a good proposition. This is quite unlike the Kutchis (Gujaratis from Kutch) or the Palanpuri Jains (a community that dominates the diamond trade) who often lend to each other.