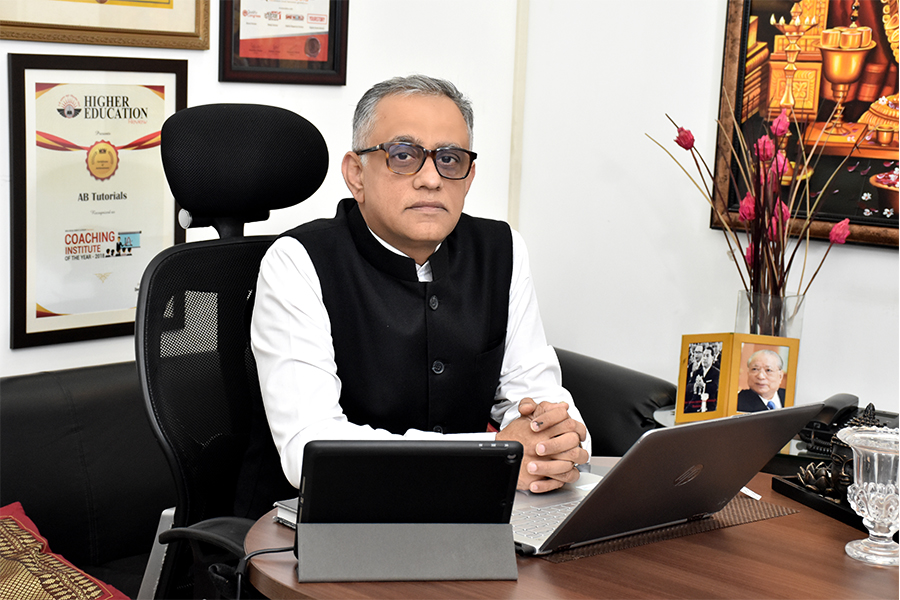 For over 25 years now, AB Education (AB Tutorials / AB Education Research & Development) has been empowering thousands of students by giving them the gift of appropriate education; Websites: www.abtutorials. com / www.aberd.co.in Having held senior positions in many international companies in the area of maritime and international contracts in quasi-legal and operations, Gaurav Bhatara took a sabbatical in 2000 to return to India to take care of family matters after losing his father. Thereafter he worked as a senior partner with an international trading company. However, soon he left to join the exam training enterprise which was started as philanthropy by his mother, eminent educationist Dr. Anila Bhatara, under the guidance of her husband late Col. RK Bhatara, VSM. One thing led to another, and he found his life’s calling in education and developed the exam training vertical AB Tutorials at New Delhi. He later diversified into education research & development with AB Education Research & Development (ABERD), headquartered in Delhi. EMPOWERING STUDENTS Since its inception over 4,000 students of AB Tutorials have joined top NLUs and become lawyers in India, and over 1 lakh students have been guided through ABERD, of whom 15,000 were guided in 2019 itself. Till date, Mr. Bhatara has personally mentored over 2,500 students to join top national law universities. What sets AB Education apart is the highest level of personalised attention that each student receives, and the strong holistic approach towards the students. Mr. Bhatara guides students to not only become accomplished lawyers but also accomplished human beings and create value in society. Even his wife Pallavi dedicates her time to helping women become self-reliant through her NGO, Ashi Foundation. HOLISTIC VIEW OF EDUCATION Coming back to India after over a decade was a challenge for Mr. Bhatara. Another challenge he had was resisting the temptation of growth at the cost of quality, while retaining the holistic personal approach of the organisation. He quotes his mentor, Buddhist philosopher, educationist, and peace activist, Dr. Daisaku Ikeda, who stated that education “is not only the realising of an individual’s true potential but also the transmission of humanity from one generation to another.” He states that an idea does not need to be fully developed in its conception stage. It evolves as you work and changes to take proper form and shape. His mantra for achieving success is believing in one’s innate ability and leading a balanced life. Practising Nichiren Buddhism, he believes in helping others (who are unhappy) to the best of one’s ability. Quoting Nichiren Diashonin he said, “If you light a lamp for another, your way will be lit too.” BEYOND BUSINESS Mr Bhatara is a proud SDG Ambassador, thanks to his support and contributions to United Nations Sustainable Development Goal 4 ( UNSDG4) to ‘ensure inclusive and equitable quality education and promote lifelong learning opportunities for all’ by 2030. The SDGChaupal 2030 initiative was launched with NITI Aayog as the lead agency and the first SDGChaupal was put on ground at Gorakhpur in the presence of Secretary General Commonwealth Secretariat Ms Patricia Scotland QC. He is currently setting up a road map to connect over 10 lakh youth in India into SDG literacy by 2030. AWARDS AND HONOURS: • Received the Delhi City Icon Award – Excellence in Legal Education (Radio City), 2018 • Awarded the Coaching Institute of the Year – ‘The Higher Education Review’ Magazine, 2019 • Felicitated with the Education Company of the Year – ‘Silicon India Magazine’, 2019 • Awarded National Quality Excellence Award (India’s Top Law Exam Institute), 2019. Disclaimer: The views, suggestions and opinions expressed here are the sole responsibility of the experts. No Forbes India journalist was involved in the writing and production of this article.