'Entrepreneurs Should not Manage Business Hands-on' 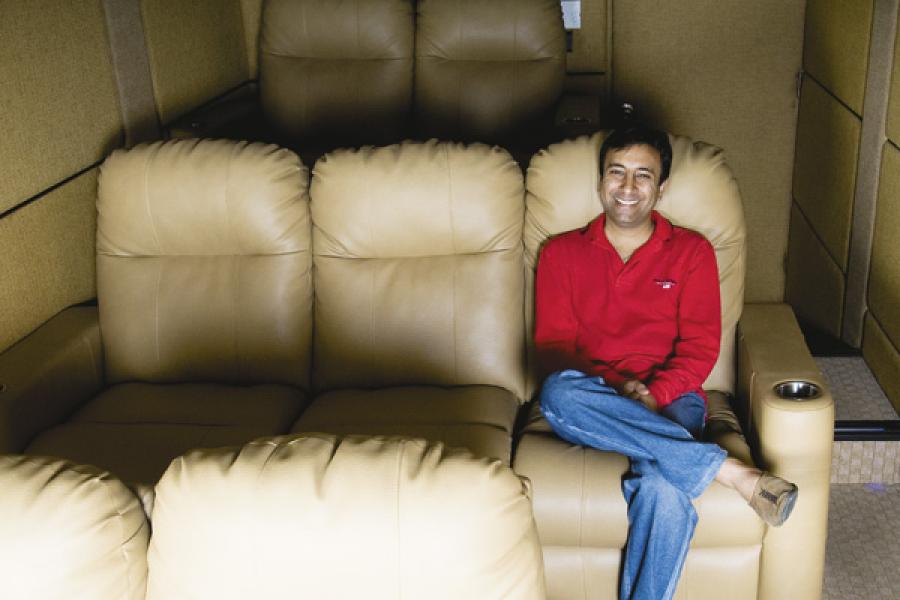 Puneet Dalmia
Designation: Managing Director of Dalmia Cement (Bharat) Ltd. He first joined the company in 1997 at age 25, but left in two years and set up JobsAhead.com with Alok Mittal
What He Has Done: Transformed the 70-year-old family-managed business into a professional organisation where the role of the family is less hands-on and more about big-picture strategic planning
How that Has Paid Off In 2004, before the transformation began, the organisation’s topline stood at $100 million. It will be around $800-$850 million by the end of 2010
What He’s Doing Next Changing the gene pool of the organisation to cater to fast growth, training a staid old economy company to be more consumer-focussed, and instilling performance management measures and variable pay

I worked in Dalmia Cement (Bharat) Ltd. from 1997-99 and then I started JobsAhead.com. I sold it and came back in 2004. I could see things with fresh eyes. There were huge strengths in the company that weren’t being fully leveraged. One, we had always had superior profitability compared to the industry. Two, operating margins were consistently one of the highest in the industry.

Yet, over 10 years, we had lost ground. Competition had grown significantly even though all of them, except ACC, entered the business after we did. Competition was aggressive in timing their investments ahead of the market and they were willing to take bigger risks and were focussed on market share.
Our capital allocation process was structurally inefficient. Three family members were running the businesses — my father was running the cement business, my cousin was running the sugar business and my uncle was running the refractory business. The capital provider and capital receiver was the same.
I spotted a brownfield expansion opportunity at Dalmiapuram near Trichy. It was a low capital cost project since we already had the infrastructure in place. We had a 1.5 million tonne plant at that site. We wanted to expand this by 2.5 million tonnes. No one was investing in the business and we could buy machines cheap. I spoke to the family; the answers were, “We are not sure whether we should invest here, or in sugar or in refractories.” We had a very unclear sense of priorities.

Till now, we had looked at business year-on-year. We needed to look at a five-year plan and invest in whatever gave us the best returns. Each business could raise its own capital to support its business plan.We made a committee of senior executives and family members and each business presented its five-year plan. This opened our eyes — we were sitting on cash but we had no projects to deploy that cash. We didn’t have a growth pipeline of projects. We were just lucky that we had a brownfield project that we could immediately deploy that cash on. Otherwise it would take us three years to incubate a project.
That started the thought process — how we should look at business 5-10 years ahead. We had to redefine the role of the family — it had to be less operational and more strategic. Entrepreneurs don’t manage business hands-on. We were deep into problem-solving at the operating level. We were not spending time on business opportunities, M&A opportunities and lobbying for changes in regulation.
We had to redefine the role of the promoters. That’s still a journey. When the change comes to you, it becomes real and painful. It also means you have to reinvent yourself. I attended a course conducted by Prof. John Ward at IMD, Switzerland. I realised that the problems we were facing were all pervasive. Eighty to 90 percent of businesses in the world are family-run — it’s a model for entrepreneurship across the world. But how do we get the best out of it?
After that Prof. Ward conducted another course at ISB — our entire family including my wife and my cousin’s wife attended. It helped give everyone the same perspective. This taught us in every generational transition there are huge opportunities and huge risks. And the third generation is most susceptible to the risks: First generation creates, second generation preserves and the third destroys. Family businesses have great inherent advantages compared to professional businesses. One, we can take a very long-term view. Two, a family business has a core shareholder base which thinks in terms of generations and not quarters. There is a huge commitment to create and enhance value because you have big skin in the game. Family unity and preserving the core shareholder base is crucial. Our family has split in the past and that has weakened us.
We used Prof. Ward’s help to redefine the family’s role. We separated capital allocation from capital receivers and got CEOs in every business. Our elder generation said that they will add value in policymaking and not day-to-day operations. For the policy level stuff we created two bodies, the Family Council and Governing Owners Council (GOC). We also created a Family constitution which defined the decisions that will be referred to the Family Council and for each of these decisions, we defined the decision-making process. We divided these decisions into 10 categories. Earlier, every decision was a consensus decision that was the unwritten rule. Now only two things are consensus: Dilution below 51 percent and exit.
This would have been a lot of pain for my father and my uncle. It’s a sudden transition from a very hands-on leader. We haven’t spoken about this explicitly, but there are many meetings that my father doesn’t attend. My father issued a notice saying, “Our role is only advisory from now on so please don’t refer any issue to me.” He said he’d make a public announcement because it is important for everybody to know this. But we are missing out on some personal touch which they used to bring. They can go to a plant, talk to people and create enormous inspiration.
We are leveraging complementary skill sets in the family. All other decisions are majority decisions. But since we are just four people in the council, there can be a 2:2 split — and a stalemate. In such a case, one person will have the casting vote. For every decision depending upon the skill-set of the person, we choose who will have the casting vote.
We want to run the family like a socialist and run the business like a capitalist. We have huge disagreements. The question is do you have a decision-making process to resolve conflict? We have created a process on most of the decisions before even the need has arisen. Whether I am happy or unhappy doesn’t impact us as much as whether the process is fair or unfair. There is a huge emphasis on process and transparency. For any point that needs to be discussed, a formal note must be circulated at least five days before the meeting.
We realised that in many cases, the family’s judgment and wisdom is limited, so we need an external input. We formed the GOC which meets quarterly. The GOC has been very carefully crafted and has four family members and M.V. Subbiah of the Murugappa Group and S. Gurumurthy. Subbiah has run a large family business. He taught us that the fairness and rigour in the process is a must — then any outcome is acceptable. Gurumurthy comes with enormous experience in Indian values which is very core to us.
The family system and the business system is a collision of two very different ecosystems. [In] the family world the values are love, affection, equality and opportunity and the business world is [all about] performance, ruthlessness and risk taking. When these two worlds collide either there can be a huge explosion or if you can leverage the best of the both worlds, you can have a great symphony.
(As told to Neelima Mahajan-Bansal)

Tweets by @forbes_india
IATA Chief: No Point Supporting a Failing Airline, Even if it's the National Carrier
Safe Social Networking