How Micromax, Intex, Lava and Karbonn—aka MILK—lost their dominant position 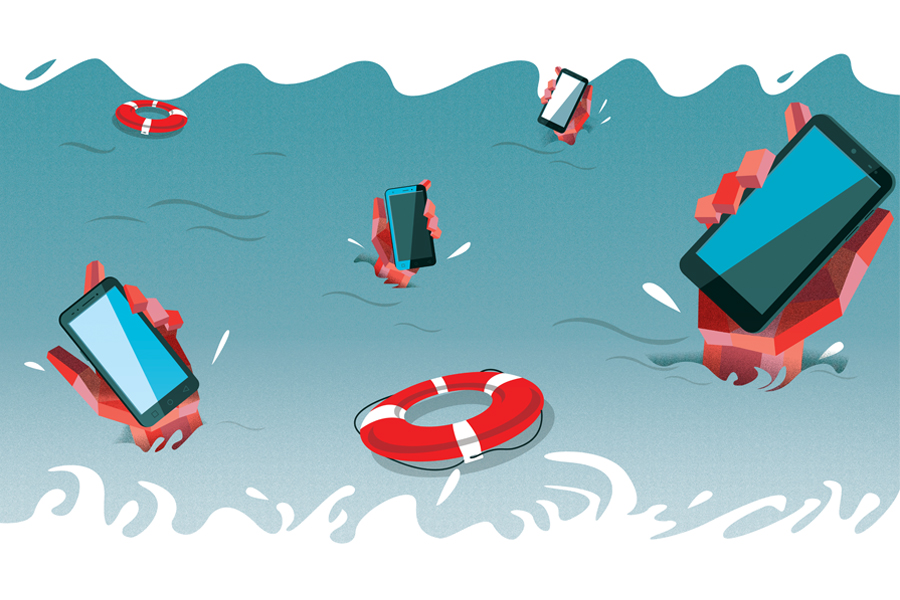 Illustration: Chaitanya Dinesh Surpur
August 2014. India is getting decked up for Independence Day celebrations. In sync with the nationalistic spirit comes the news that domestic handset makers have together captured more than two-thirds of the market. In fact, Indian players have dominated over half of the smartphone market during the second quarter (April-June). Micromax, in a first, has overtaken mighty South Korean rival Samsung to become India’s biggest handset player with a 17 percent share. What’s more, the desi hustler has pipped Finnish giant Nokia to become the leading feature phone brand. Two other Indian players, Karbonn and Lava, are among the top five feature phone makers. Karbonn is also the third biggest smartphone brand during the quarter. 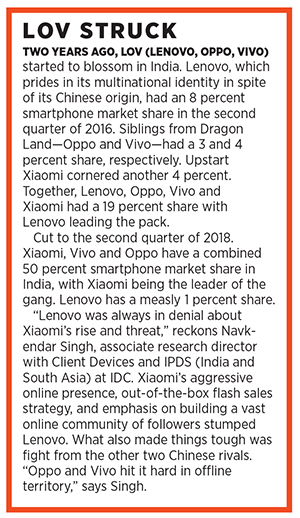 Cut to August 2018. In a dramatic anti-climax, Indian MILK (Micromax, Intex, Lava and Karbonn) has turned sour. Four of the top five players today are Chinese; the fifth is Samsung. Together they control a record 82 percent share of the smartphone market, according to the latest second quarter data released by market research firm Counterpoint.

While the Chinese are sharing the spoils in smartphones, in feature phones it’s Jio that rules the roost with a 47 percent market share in the same period.

From a high of 19.1 percent in smartphones in 2014, the share of Micromax, the biggest among MILK, plunged to 1 percent in the second quarter of this financial year. The crash in the overall handset market share during the same period is equally phenomenal: From 16.6 percent to 1 percent.
Intex has followed suit; from a high of 10 percent overall handset share to a paltry 1 percent. It’s been quite a fall for the homegrown player that captured the attention of the nation by becoming the owner of the Pune Warriors India team in the Indian Premier League for two years. Lava has also turned cold, although the slide hasn’t been as steep: From 3 percent in smartphones to 2 percent, and from 5 percent to 4 percent in overall handsets.

Karbonn, till not too long ago the second best performing Indian brand after Micromax, has fallen with a thud. From a 6 percent smartphone market share in April-June 2014 to less than 1 percent now, it is struggling to stay alive. 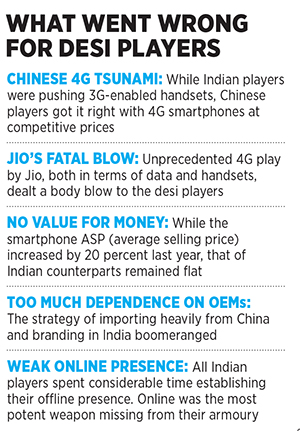 “When you are in the game just to survive, then you are almost out of the game,” says Deepak Kumar, founder analyst at B&M Nxt. “The market dynamics have changed so much that a comeback would be quite difficult, if not impossible, for the Indian players.”

The MILK brigade stormed ahead of Nokia and Samsung because of its swiftness in adding features that suited local consumers. However, with the Chinese brands doing all of that and much more, the innovation spurt of the local warriors has proven to be unsustainable.

Take, for instance, Micromax. In February 2015, global smartphone research firm Canalys declared Micromax the winner. “Micromax has been quicker than its competitors to improve the appeal of devices, for example, by including a wide variety of local languages on its Unite phones,” according to analyst Rushabh Doshi.

To be fair to the former tenth largest handset maker in the world that roped in Hugh Jackman to endorse handsets in 2013, Micromax did disrupt the Indian market with its set of innovations. Take, for instance, 30-day battery backup, dual Sim phones, Qwerty keypads, universal remote control mobile phones and the first quad-core budget smartphone. All these features were firsts by any handset player in India.

The desi players were also quick to see an opportunity in addressing the latent needs of a price-conscious customer segment. “They packed more features at attractively low prices while keeping their input costs even lower by leveraging a make-in-China model,” says Kumar. This helped them unlock the potential of a large, not-so-brand-conscious customer base that was not catered to by multinational brands such as Nokia, Samsung and Motorola, among others.

Five years ago, value-for-money offerings turned out to be the biggest USP of local brands. In this era of Micromax and its ilk, reckons brand strategist Harish Bijoor, sturdy offerings by Indian players that did not cost the earth promised excellent functionality and durability for Indian conditions. They dumbed down the features to offer the best at a price that no one else could match. “They tore into Nokia and the space it occupied,” adds Bijoor. 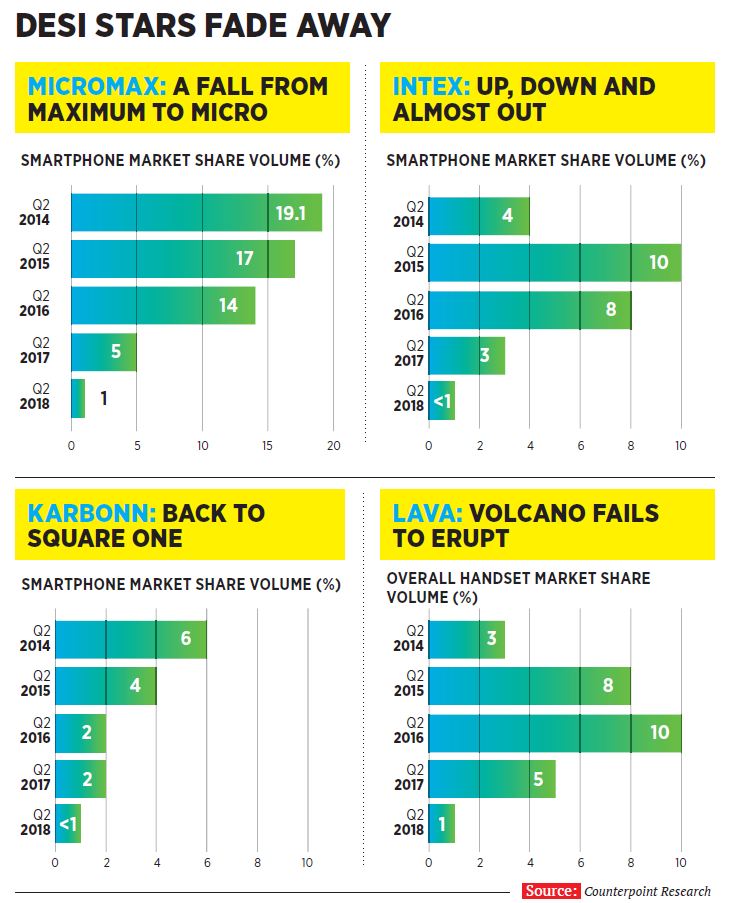 However, the Make-in-China model—sourcing handsets from China and selling them under Indian branding at lower prices—turned out to be a bane when ‘original’ Chinese handset makers entered the Indian market. The desi Chinese clones, consequently, came under pressure.

What, however, turned out to be a body blow for Indian players was the speed with which the smartphone handset market switched from 3G to 4G. Micromax and other local players were left stranded as Chinese players flooded the market with 4G handsets loaded with high specifications and features such as a dual selfie camera and sensor recognition. What accelerated the market towards 4G was the aggressive push by Jio.

It was not the likes of Xiaomi that did most of the damage. Vivo and Oppo turned out to be the chief villains. Not only did they aggressively advertise on TV, they also spent insane amounts in marketing and painting the town red with their blue and green logos, respectively. Indian players, contend marketing experts, yielded ground by not pressing on the gas.

“Their strategy of lying low to evade the Chinese storm was a blunder,” says Ashita Aggarwal, marketing professor at SP Jain Institute of Management and Research. They should have matched the might of the Chinese not in terms of spending marketing dollar but in terms of getting aggressive online. “That’s a crucial trick that they missed,” she adds.

Chances of a comeback look slim. “For any has-been, the chance of coming back is impossible,” says Navkendar Singh, associate research director with Client Devices and IPDS (India and South Asia), IDC. The market dynamics have changed radically with the top five players cornering most of the market. “There is not much breathing space left for other players.”

It seems, there’s no point crying over spilt MILK.