Women need to be at the front and centre of Covid-19 recovery: Mitali Nikore

The founder of Nikore Associates, a youth-led economics research think tank writes about how women have consistently been left out of India's growth story, and why changing that will make all the difference 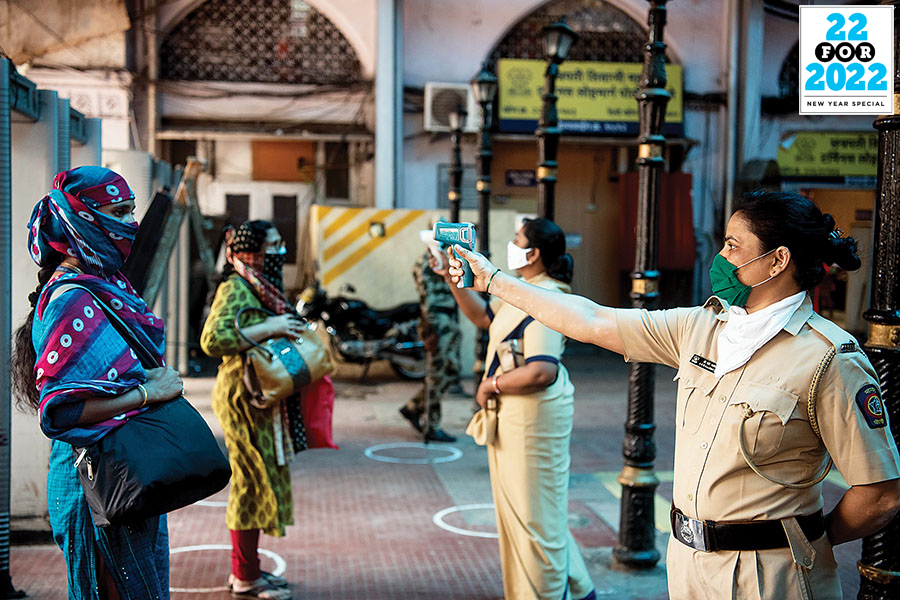 A multi-stakeholder approach is required for increasing women’s participation in the workforce
Image: Shutterstock 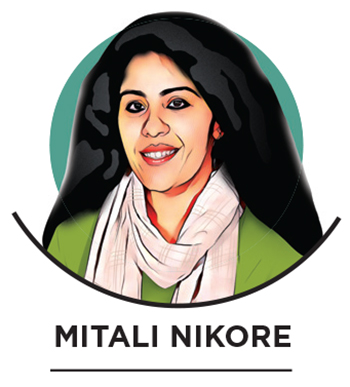 The recent release of the fifth round of data from the National Family Health Survey (NFHS-5) has been accompanied by a singular focus on one particular statistic—the increase in the total sex ratio from 991 to 1,020 women per 1,000 men. This one statistic led to a misleading inference that there are now more women than men in India. There was collective amnesia about the fact that this statistic was an estimate based on a survey of about 6.4 lakh households, representing 0.2 percent of India’s 300 million (3 crore) households, and a conclusion on the absolute number of women exceeding men in a country as vast and gender-unequal as India, should only be based on the findings of a comprehensive national census.

At this time, therefore, it becomes pertinent to reexamine available evidence, and remind ourselves of the persistent gender-based discrimination that limits women’s choices about their lives and livelihoods, and their economic participation.

First, confirming that discrimination against the girl child begins at birth, there is strong evidence for continued prevalence of the preference for sons. The sex ratio at birth (SRB) has only increased by about 1.6 percent over the last 15 years, between 2005-06 and 2019-21. While at the national level, the SRB has increased from 919 (2015-16) to 929 (2019-21), it has actually declined in 13 states and Union Territories, including some of the most populous states such as Maharashtra, Bihar, Jharkhand, Tamil Nadu, Odisha, Chhattisgarh, and Kerala.

Second, this gender-based discrimination permeates into girls’ education and training, creating barriers to women’s entry into the workforce. Gender gaps in primary and secondary enrolment have narrowed considerably over the past few decades. The gender parity index crossed 1 (indicating parity between girls and boys) for primary enrolment by 2007, and for secondary enrolment by 2011, according to World Bank data.

However, school closures during Covid-19 have threatened the progress made on girls’ education. Consultations by Nikore Associates between August 2020 and May 2021 with over 60 community-based organisations (CBOs), self-help groups and academic experts reveal a distinct male preference for continuing education, access to digital devices, and online schooling, especially when faced with income constraints. Stakeholders also shared anecdotes of increases in child marriage among girls.

In addition, tertiary education and vocational training have continued to show persistent gender gaps over the last few decades. Currently, about 41 percent of women in India have more than 10 years of schooling versus 50 percent of men, as per NFHS-5 data. Only 9 percent working age women received skill training in 2019-20, versus 19 percent men, and about half the trained women did not join the labour force, according to data from the National Statistical Office (NSO).

Women also faced the brunt of Covid-19 lockdowns and associated economic distress. Between March and April 2020, 27 percent women moved out of the labour force versus 13 percent of men. Moreover, as the second Covid-19 wave hit rural India with an unexpected ferocity, nearly 80 percent of job losses in April 2021 were among rural women, according to data from the Centre for Monitoring Indian Economy (CMIE). 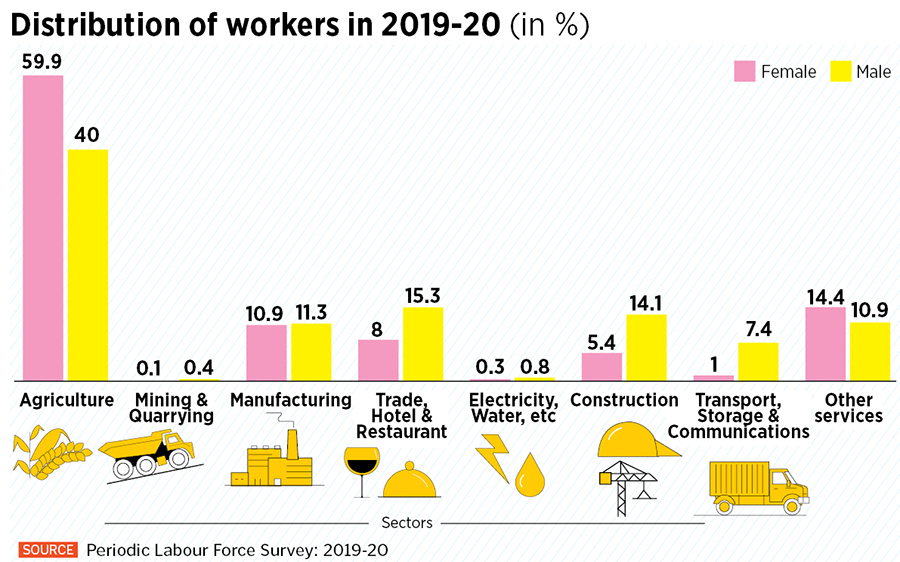 Fourth, deep-rooted social norms govern women’s lives, agency, decision-making and even time-use, let alone the decision to work outside the home. Encouragingly, nearly 89 percent of women in India are now able to participate in household decisions, up from 37 percent in 2005-06, as per the latest NFHS data. Yet, women undertook 10X more unpaid care work than men in 2019 (NSO data) and faced severe mobility restrictions, such that only 41 percent of married women were allowed to go to a nearby market, visit a health facility and go outside their village/community alone in 2015-16 (NFHS data). Our consultations show that women across income groups and occupations, be it farmers, corporate workers, or entrepreneurs, consistently reported an increase in domestic workload and faced increasingly severe mobility restrictions during the pandemic.

Finally, in the post-Covid-19 era, the gender digital divide has emerged as another barrier constraining women’s full participation in the growing digital economy. Even in urban areas, about 52 percent women report they use the internet in 2019-21 versus 73 percent men. In rural areas, the gap is wider—25 percent women versus 49 percent men—as per NFHS-5. According to the Mobile Gender Gap Report 2021 by GSMA, the global association of mobile network operators, women in India are 39 percent less likely to own a smartphone, and 15 percent less likely to own a mobile phone of any kind.

Moreover, our consultations reveal that digital illiteracy and unfamiliarity with digital platforms deter women from optimally using their devices, leading to their exclusion from online schooling, skill training, entrepreneurship, and work opportunities.

In 2017, India was the fastest growing emerging economy in the world. Ironically, it was also the year when women’s workforce participation hit its nadir. Women have consistently been excluded from India’s growth story—they must now be placed front and centre, at the heart of the post-Covid-19 recovery. This necessitates a shift in the nature of interventions, as well as service delivery modalities.

Government schemes and public sector initiatives should take the lead and adopt a gender-mainstreaming approach so that a gender lens is applied when designing infrastructure and development programmes at the centre, state, district, block or even village level. For instance, ensuring sufficient street lights when a new road is built, or provisioning for crèches when a new work site is established.

Gender Action Plans should be prepared alongside government-supported projects, based on inputs from relevant women’s groups, and including clear outputs, outcomes, and impact indicators to ensure public expenditure is gender-inclusive. Programing should focus clearly on women’s needs, separately from the investments required in children.

The Government of India’s Gender Budget has remained below 5 percent of the total expenditure budget, and below 1 percent of the Gross Domestic Product (GDP) between 2005-06 and 2021-22. This demonstrates clear resource gaps for provision of women-focussed infrastructure and services. However, in light of Covid-19, with the fiscal deficit projected to touch 6.8 percent of GDP in FY22, there are limits to expansion of the Gender Budget.

This necessitates the deployment of innovative service delivery models such as public-private partnerships (PPP) to incentivise private agencies or CBOs to implement gender equality and women empowerment (GEWE) programmes. For instance, CBOs can be provided government support to operate and maintain one-stop shelters on PPP basis for violence survivors, or run childcare centres staffed by women, thereby creating employment and entrepreneurship opportunities for women.

A special focus is required for increasing women’s participation in the workforce. Central and state governments can support this through specific measures including quotas for women across all levels of government jobs, preferential procurement from women entrepreneurs in government contracts, and expanding access to education and skill training for women and girls, especially in STEM sectors. In addition, public and private investment in care work infrastructure and services are required to reduce women’s time poverty. Ring-fenced funding and schemes to expand access to finance are essential to support women entrepreneurs and can be offered by both public and private sector banks.

Private sector corporate social responsibility programmes should recognise the need to integrate GEWE considerations in their community-level interventions across sectors. Moreover, corporates can bring in policies to promote diversity and inclusion within their workplace, and even among the suppliers in their value chains, thereby influencing wider marketplaces.

There is a need to step away from the traditional approach of solely relying on the public sector, and move towards a multi-stakeholder, partnerships-based approach with greater contribution from the private and social sectors for truly charting a gender-inclusive post-Covid-19 economic recovery.

Tweets by @forbesindia
Big Brother in the workplace: Do employees accept behavior tracking?
Sunil Gupta, CEO of QNu Labs, on post-quantum cryptography and building a deep tech company in India