Anshu Jain, who helped transform Deutsche Bank from a conservative middle-market lender in Germany into a Wall Street giant and who eventually became its first non-European CEO, died Saturday in London, where he lived 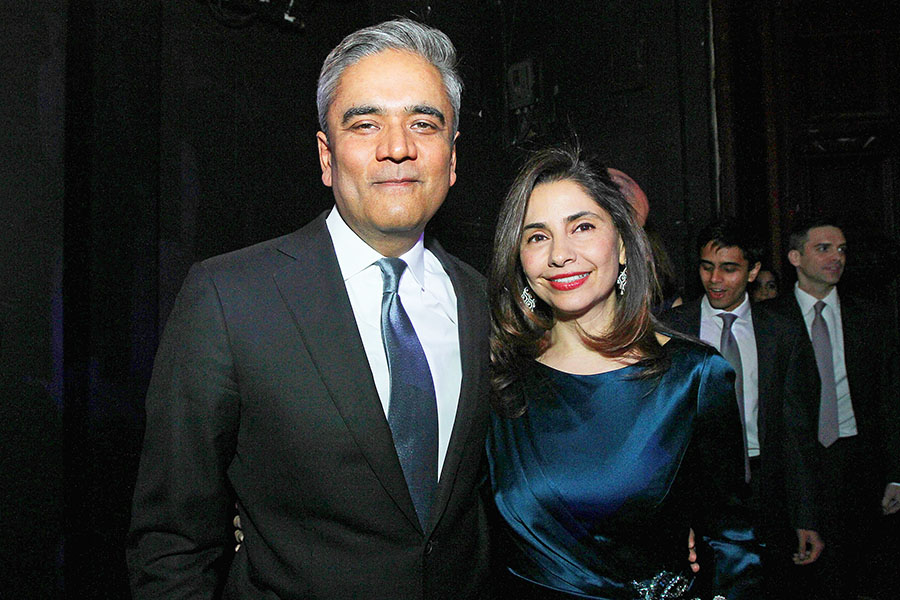 Anshu Jain and his wife, Geetika Jain, in New York, Feb. 26, 2014. Jain, who helped transform Deutsche Bank from a conservative middle-market lender in Germany into a Wall Street giant and who eventually became its first non-European chief executive, died on Saturday, Aug. 13, 2022, in London, where he lived. He was 59. (Tina Fineberg/The New York Times)

Anshu Jain, who helped transform Deutsche Bank from a conservative middle-market lender in Germany into a Wall Street giant and who eventually became its first non-European CEO, died Saturday in London, where he lived. He was 59.

The cause was cancer of the intestines, his family said in a statement.

Jain, who joined Deutsche Bank in the mid-1990s, helped build the bank’s Wall Street businesses, not only advising companies but trading in the complex financial products whose sudden collapse in value in 2008 set off a global panic in the financial markets.

He took over as co-CEO in 2012, just as Deutsche Bank was making a series of real estate loans to Donald Trump, providing funds that allowed him to refinance a skyscraper in Chicago, buy a golf resort in Florida and renovate the Old Post Office Building in Washington, his last big venture before running for president.

Jain resigned in 2015 after a downturn in Deutsche Bank’s fortunes, caused largely by the increasingly complex activities he and his fellow executives had promoted. Even as other banks had tried to simplify and pare down their investment businesses after the 2008 crisis, Jain had pressed on, to the bank’s ultimate detriment.

In 2017, he became president of U.S.-based investment bank Cantor Fitzgerald.

“He achieved tremendous things,” said David Folkerts-Landau, Deutsche Bank’s global head of research, who worked with Jain for 20 years. “He did not achieve his full potential. He could have moved into the pantheon of finance if times had been just a little bit more fortunate for him.”

In a statement emailed to reporters, Alexander Wynaendts, chair of Deutsche Bank’s supervisory board, said Jain had “played a key role in expanding Deutsche Bank’s position in our global business with companies and institutional investors” and more broadly in helping to solidify “Europe as a financial center.”

Anshuman Jain was born in January 1963 in Jaipur, India, and reared by parents who followed Jainism, an Indian religion whose precepts include doing no harm to any living thing. The family was vegetarian, a diet to which Jain adhered throughout his life. His parents were intellectuals, avid bridge players and, as Jain’s wife, Geetika Jain, put it, “obsessive newspaper readers.”

In the Jain family, his close friend Madhav Dhar said, “there was an ethos of hard work, integrity, asceticism, not being outrageous, not being lavish, and a tremendous focus on education.”

Jain’s father, Ambuj Jain, worked for the Indian Audit and Accounts Service, a government agency, which posted him to a new place every three years. As a result, Anshu moved around often as a child, at one point spending three years in Kabul, Afghanistan. He attended Shri Ram College of Commerce in Delhi, where he met Geetika.

After graduating, he followed her and her family to the United States. At 20, he received a master’s degree from the University of Massachusetts, Amherst.

He faced a tough environment there, according to David Enrich, a business reporter and editor for The New York Times, who wrote “Dark Towers: Deutsche Bank, Donald Trump and an Epic Trail of Destruction” (2020). Jain, Enrich wrote, “had to contend with the largely Irish Catholic sales force” at Merrill whose members were “repeatedly mistaking him for an IT guy.”

But Jain excelled as a derivatives salesperson and soon became one of the youngest-ever managing directors at the firm, Enrich wrote. In 1995, at 32, Jain was one of a group of young Merrill superstars who were lured away to Deutsche Bank by the founder of Merrill’s derivatives business.

At Deutsche Bank, he established a reputation as an expert in the burgeoning world of hedge funds. He often pushed for more freedom to do new things at greater speed, lobbying his bosses to approve trades without presenting them to the risk committee at the bank’s headquarters in Frankfurt, Germany, according to Enrich.

As he ascended to increasingly powerful positions in Deutsche Bank’s investment bank, eventually becoming its chief, Jain built a cadre of loyal underlings who became known within the bank as “Anshu’s army.” Their path to power and wealth was smoothed by Deutsche Bank’s aggressive efforts to weaken German banking regulations and limit oversight of the bank’s operations.

The trades Jain made popular earned the bank billions of dollars. In the lead-up to the 2008 crisis, his team was one of very few on Wall Street that bet that the prices of mortgage-backed securities would fall, a triumph of foresight that belonged squarely to Jain, Folkerts-Landau said.

But some of the bank’s complicated trades also caused problems. In one case, it was accused of using derivative trades to help the Italian bank Monte dei Paschi di Siena hide losses, although judgments against Deutsche Bank in an Italian court were overturned on appeal.

In 2012, the bank’s board appointed Jain and a German banker, Jürgen Fitschen, as co-CEOs. Founded in 1870, Deutsche Bank, the country’s largest financial institution, was by then so powerful in Germany that its leaders were sometimes viewed as quasi-governmental, exerting strong influence over German politicians.

At Deutsche Bank, Jain faced obstacles as an immigrant, including episodes of racism, colleagues said. “The local media insisted on pointing out, in just about every story, that he was Indian,” Enrich wrote. Fitschen, he added, “apologetically explained to one colleague that Germans didn’t look fondly upon outsiders in the banking sector.”

Geetika Jain and the Jains’ son, Arjun, 30, and daughter, Aranya, 28, said Jain had sought to help young Indians succeed in financial careers in London, where he spent most of his time. When he recruited Indians for entry-level positions at Deutsche Bank, he would advise them on how to dress and how to fit in in London.

In addition to his wife and children, he is survived by his mother, Shashi Jain, and his brother, Ashwin.