Anthony Fauci, face of America's Covid-19 fight, to step down in December

In the chaotic early days of the pandemic, Fauci became the nation's most trusted expert on Covid -- but his clashes with former president Donald Trump over the virus response drew anger from the right, and he now lives with security protection following death threats against his family 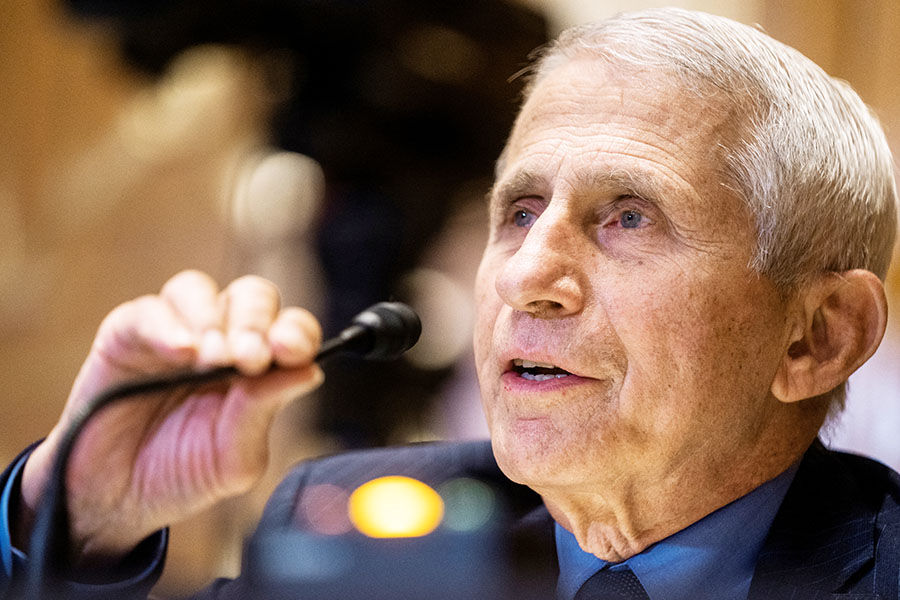 Director of the National Institute of Allergy and Infectious Diseases Dr. Anthony Fauci testifies during the Senate Appropriations Subcommittee on Labor, Health and Human Services, and Education, and Related Agencies hearing to examine proposed budget estimates for fiscal year 2023 for the National Institutes of Health on Capitol Hill in Washington, U.S., May 17, 2022. Image: Shawn Thew/Pool via REUTERS

Washington, United States: Anthony Fauci, the top infectious disease expert who became the face of America's fight against Covid-19, announced Monday he will leave government service after more than 50 years in December, stepping down as advisor to President Joe Biden.
In the chaotic early days of the pandemic, Fauci became the nation's most trusted expert on Covid—but his clashes with former president Donald Trump over the virus response drew anger from the right, and he now lives with security protection following death threats against his family.
The 81-year-old, who has served under seven presidents beginning with Ronald Reagan, said in a statement he would be leaving both his position as director of the National Institute of Allergy and Infectious Diseases (NIAID), and that of chief medical advisor to Biden.

But he added: "I am not retiring." Instead Fauci, who had said he would leave by the end of Biden's current term, said he now intended to "pursue the next chapter of my career."
Biden extended his "deepest thanks" to Fauci in a White House statement, adding that the country is "stronger, more resilient, and healthier because of him."
Fauci has helmed the United States' response to infectious disease outbreaks since the 1980s, from HIV/AIDS to Covid.
When the coronavirus first spread globally from China in 2020, he became a credible source of reliable information, reassuring the public with his calm and professorial demeanor during frequent media appearances.
His straight-talking approach won him legions of fans, who bought T-shirts and bobbleheads in his likeness and made cocktails named after him.
"I will always be grateful that we had a once-in-a-century public health leader to guide us through a once-in-a-century pandemic," tweeted former president Barack Obama upon news Fauci was stepping down.
But his honest takes on America's early failures to get to grips with the virus soon brought Fauci into conflict with Trump. The White House at one point barred him from doing TV interviews and launched a media blitz against him.
The clash helped turn him into a hate figure for many on the right—already incensed by the pandemic protections Fauci was advocating, from masks and vaccines to lockdown measures.
"Dr. Fauci lost the trust of the American people when his guidance unnecessarily kept schools closed and businesses shut," Republican House Minority Leader Kevin McCarthy tweeted Monday.
In emotional testimony earlier this year, Fauci slammed another prominent Republican, the vaccine skeptic Senator Rand Paul, for unleashing "crazies" against him, recounting "threats upon my life, harassment of my family, and my children with obscene phone calls."
This month a West Virginia man was sentenced to three years in prison for threatening to drag Fauci and his family into the street and beat them to death.
But despite the threats, Fauci has been conciliatory towards Trump, telling Politico that they developed "an interesting relationship."

'Honor of a lifetime'

It was not the first time Fauci faced criticism and clashes. In the 1980s he became a lightning rod for accusations the government was not doing enough to stem the rise of HIV/AIDS—but he later forged a close collaboration with activists.
His accomplishments include implementing a fast-track system that widened access to antiretroviral medicines, and working with former president George H.W. Bush to plow in more resources.
Later, under president George W. Bush, Fauci was the architect of a relief plan credited with saving millions of lives in sub-Saharan Africa.
As a scientist, he is credited with developing effective treatments for formerly fatal inflammatory diseases, as well as for contributions into understanding how HIV destroys the body's defenses.
Despite his many duties, he had continued to treat patients at the NIH's Clinical Center in Bethesda, Maryland. It was not clear if that was part of his plans going forward.
Biden said that after winning the 2020 election, as he built a team to lead the Covid-19 response, Fauci was "one of my first calls."
"I've been able to call him at any hour of the day for his advice," the president stated.
Fauci said it had been the "honor of a lifetime" to lead the NIAID, which he has done since 1984.
He did not spell out what he will do next, but said he wants to inspire and mentor the next generation, citing the "energy and passion" he still has for the field despite his decades of service.
"I am proud to have been part of this important work," he said.
© Agence France-Presse

Tweets by @forbesindia
Ford to cut 3,000 jobs in a push towards electric
S&P sees biggest drop since June